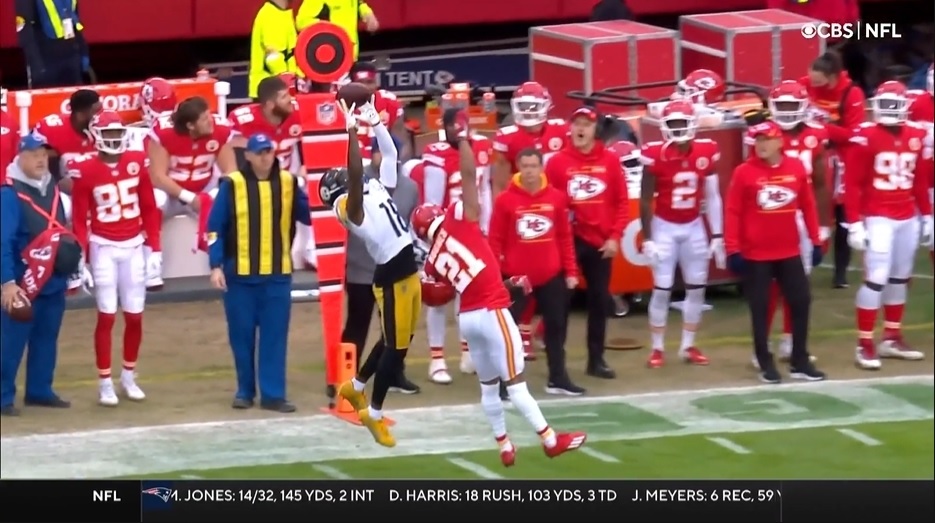 Though Sunday’s performance was far from a Pro Bowl showing, it shouldn’t detract from the overall great season Pittsburgh Steelers’ WR Diontae Johnson has had. A year certainly worthy of a Pro Bowl honor. But when the AFC squad was announced last Wednesday, Johnson’s name was left off the list. Asked about the exclusion Monday, Johnson said he took it personally.

“I’m not going to lie, I was kind if pissed,” he said via Steelers.com. “But I can’t do anything about it. It’s up to to the fans and the other people, the members and players around the league. I don’t have any say in that. I can only pray they vote for me. It was tough because I know all the work I put in the offseason and during the season as well. I was watching TV and I saw it and it crushed me a little.”

After a difficult 2020 season filled with drops and poor performances, Johnson came into 2021 with renewed focus. He’s proven to be the Steelers most consistent and reliable receiver, seeing a high amount of volume each game. He’s the first Steelers’ receiver to cross the 1000-yard mark since 2018. To date, his receptions and yards lead the team outright, while he’s tied with Pat Freiermuth for the most touchdowns. Across the AFC, he ranks fourth in receptions, fifth in yards, and tied for the seventh-most touchdowns.

Ultimately, he lost out to the Bills’ Stefon Diggs and the Chargers’ Keenan Allen. Johnson is still searching for his first Pro Bowl bid, and said his name being left off the list is refocusing him the rest of the season.

“I didn’t come into the building with a cold shoulder but it’s like, I gotta get back on my stuff. I don’t want to say I was getting complacent or anything but it just shows me I got a little more work to do. I’m going to keep working. I feel like if I get another opportunity next year, if I get picked, then it’s going to be a blessing.”

Unfortunately, Johnson is coming off one of his worst games of the season. After a decent first half of play, including making an impressive catch on the Steelers’ first drive, he lost a fumble and had a drop in the second half. The fumble was particularly egregious, the ball bouncing off his leg and recovered by the Chiefs.

With the Pro Bowl vote decided and the Steelers’ playoff hopes in the balance, Johnson is turning his attention to finishing the season strong.

“But right now, I can’t really think about [not making the Pro Bowl]. Hopefully I get an alternate or something like that. I’m going to leave it in God’s hands and keep working.”

In addition to a future Pro Bowl bid, Johnson could also be looking for a payday this summer. It’s possible he and the team work out a long-term extension; 2022 will be the final year of his rookie deal, though the odds of a contract being agreed to will center around how much money Johnson is asking for.