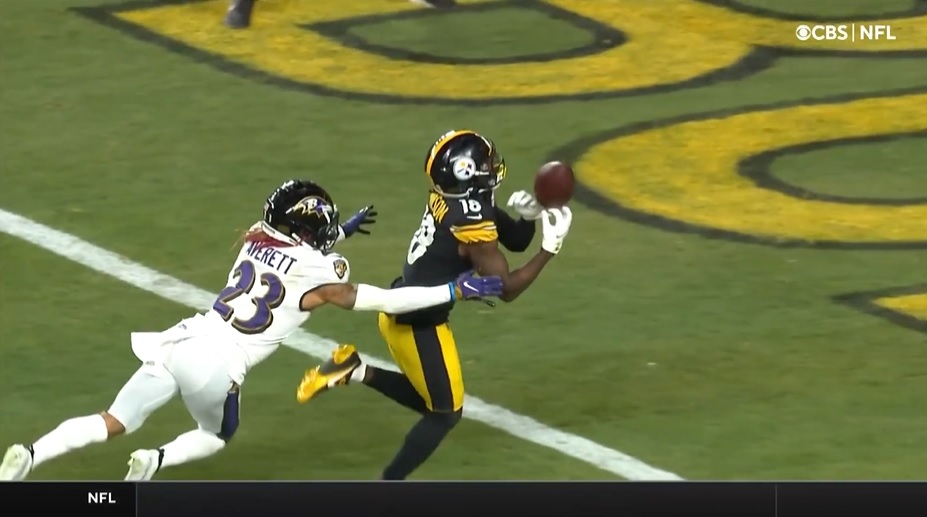 Sunday could’ve been Diontae Johnson’s worst game of the season. After showing great hands all season long, he dropped a crucial would-be touchdown against the Baltimore Ravens on a pretty deep ball throw by Ben Roethlisberger. Instead of six, the Steelers were forced to settle for three.

Another look at deep pass from Ben to Diontae that was dropped #Steelers pic.twitter.com/R54dVjABwz

But Johnson turned things around in the second half, putting together a 100-yard, two-touchdown performance for the first time in his NFL career. Speaking with reporters Tuesday, Johnson talked about the good, bad, and ugly from his performance.

“When I dropped it, I just like, ‘dang it, I gotta make that play.'” he told reporters post-practice via Steelers.com. “But they count on me. I just moved on from it instantly. I knew I had to. There was still a lot of game to play left, it was still the first half. So I couldn’t keep worrying about that drop because it would’ve shown in my play. So I had to move past it.”

Move past it he did. He found the end zone twice in the second half on great playcalls from OC Matt Canada and equally great routes by Johnson. On the second, he ran a return/pivot route to the outside to fool CB Marlon Humphrey as Johnson dove into the end zone. The type of play only Johnson is capable of making.

Johnson showed the mentality of a cornerback, a short-term memory of putting bad plays behind him and making the next one. A trait that shows the maturity he’s developed over his first three years in the NFL.

“That shows maturity when you go out there and make plays after a big drop like that and you get an end zone twice. It shows growth. I feel like I did that in a big way. Just staying positive and just having that confidence in myself that I’m going make the catch whenever the ball comes to me at any time, I’m gonna make it regardless.”

Johnson has proven to be the team’s best and most consistent this receiver, on track to put up a 117 catch, 1,400 yard season. Pittsburgh will need Johnson to step up again Thursday night in another crucial game against the Minnesota Vikings. With a win, the Steelers can have some breathing room as they head into their mini bye week.