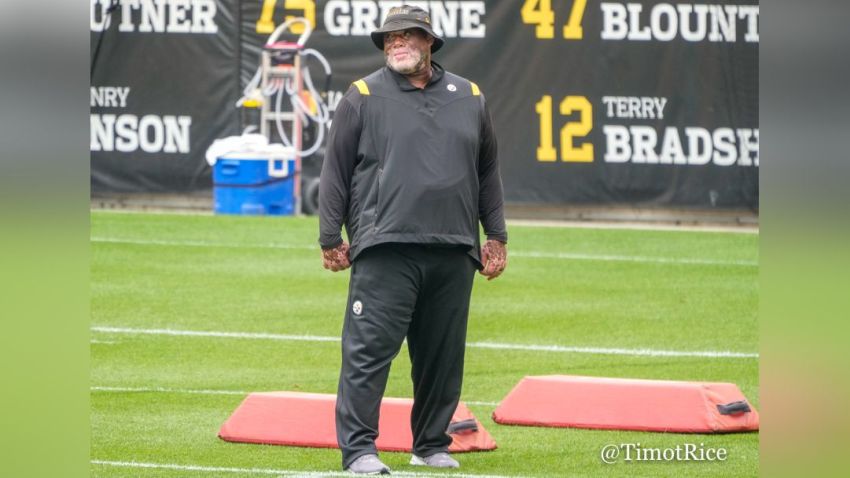 The Steelers’ pass rush has always been a major strength of the team, dating back to the Steel Curtain days. The same remains true for the modern-day Steelers, obviously led by T.J. Watt and others.

Karl Dunbar, the team’s defensive line coach since 2018, has played a large role in the progression of the pass rush. Watt has obviously developed into arguably the best pass rusher in football. The likes of Alex Highsmith and Bud Dupree have enjoyed tremendous growths in their times as Steelers.

Perhaps more importantly, the Steelers get more pressure out of their defensive linemen than we’re accustomed to seeing. Cameron Heyward and Stephon Tuitt, who remains sidelined, are two of the best pass-rushing defensive linemen in football. Keith Butler described the influence Dunbar has had on the team over the past few seasons.

“[He does] a lot of film study. In terms of the pass rush, you see them out there. If you watch them, every day they’re out there hitting those bags and swimming the bags and doing all kinds of stuff,” Butler said Thursday in audio provided via the team.

Speaking of Heyward, he was just honored with his fifth consecutive Pro Bowl appearance, four of which have come in Dunbar’s tenure. Tuitt hasn’t yet played in 2021, but he had a career-high 11 sacks in 2020.

It was mentioned that the Steelers have picked up around 200 sacks since Dunbar’s arrival in 2018. His influence on the front seven has been instrumental in turning the defense around from its subpar performances a handful of years ago.

“It becomes natural too because they do it so much and I think that’s just good coaching on his part,” Butler said.

If the Steelers opt to clean up shop in the offseason, one would have to think Dunbar would be one of the beneficiaries. Either a potential promotion or staying in his current position, it’s unlikely to see the Steelers moving on from him.

Although not mentioned often, Dunbar remains one of the unsung heroes of the Steelers’ defensive success.