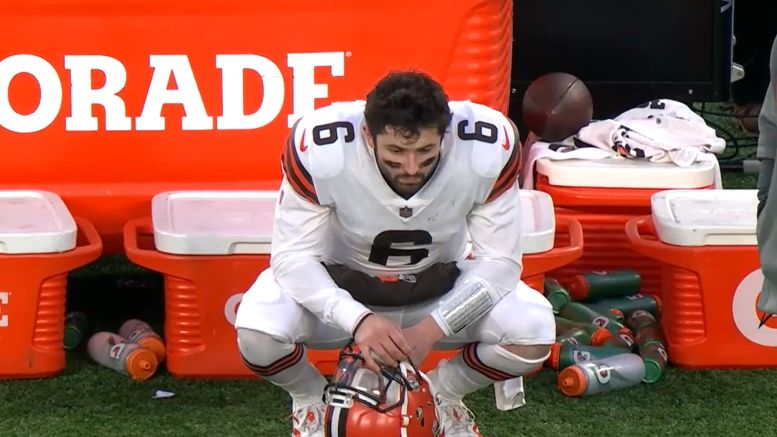 Things could be better in Cleveland right now. The Browns are preparing to play a game on Saturday against the Las Vegas Raiders without their head coach and about half of their starters, most of whom have tested positive for COVID-19. That includes, as of yesterday, quarterback Baker Mayfield, as well as multiple linemen, tight ends, and Jarvis Landry, their top wide receiver.

Cleveland is one of multiple teams to have suffered an outbreak spread event in their facility over the course of the past week or so, in spite of the fact that the Browns are said to be a team with a very high vaccination rate. Some of them have probably even gotten a booster shot—head coach Kevin Stefanski said just a day before testing positive that he got a booster shot.

But vaccinated players only get tested once a week. Players can walk around for several days fully infected and shedding the virus around their coaches and teammates, whether they have symptoms or not, before it is known that they have tested positive. This was likely the case for the Pittsburgh Steelers’ T.J. Watt earlier this year, who tested positive a day after a game.

The thing is, it’s not because of the NFLPA that there isn’t daily testing for even the vaccinated players. J.C. Tretter, who happens to be both the Browns’ starting center and the NFLPA president, authored a column back in September advocating for daily testing for players, and laid out a scenario that would come to pass in his own building months later.

“For up to six days, the virus spreads throughout the facility with no one knowing”, he laid out in a hypothetical scenario. “When it gets to the following Monday, the team resumes testing and 10+ players and staff test positive. Those 10+ people now are in doubt for the following game. Some may be able to get cleared before, but some won’t; and that team will be missing key players”.

And yet, the NFL came out yesterday and, bafflingly, denied the utility of daily testing, coming from Dr. Allen Sills:

“What testing doesn’t do is prevent transmission, and we’ve known that always”, he said. “That was true last year, and it’s still true today. As we look at how to respond, what we’re trying to do is prevent spread within the facility and keep people from testing positive”.

This is absurd, and is a statement that has been roundly criticized. While an individual can shed virus days before actually testing positive, it remains true that the less time one spends around people shedding virus, the less likely you are to transmit it. Two days around somebody with the virus is a lot better than five.

And yet, though testing is not an effective preventative strategy, unvaccinated players have to be tested every day, and teams who have to go into enhanced protocols also test every day. That makes the claim feel a lot more hollow, doesn’t it?

Meanwhile, the league has over 100 of its players on Reserve/COVID-19 lists at the moment. Several dozen backups, including guys signed off of practice squads and off the streets, will be playing critical roles this weekend, directly because of this.