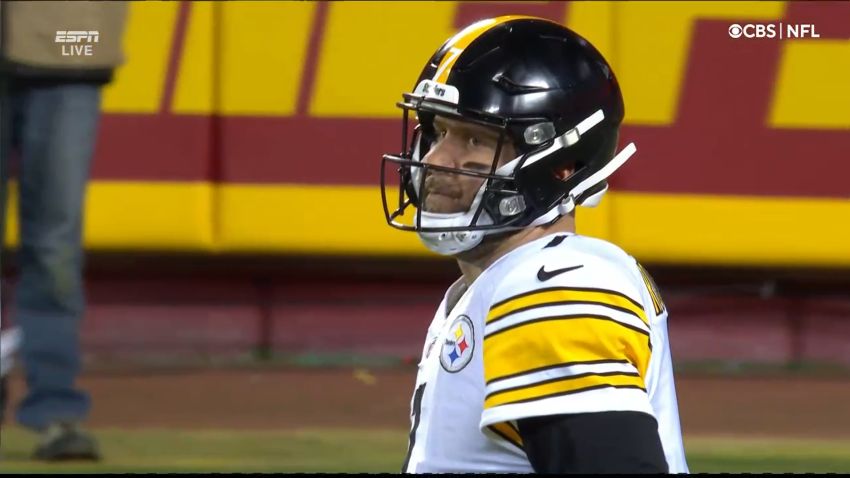 The Pittsburgh Steelers’ first drive of the fourth quarter, during which they have been at their best all season, lasted all of 14 seconds. It consisted of one play, on which quarterback Ben Roethlisberger was sacked and stripped of the ball, recovered by the Kansas City Chiefs and returned to the seven-yard line.

They wildly botched the ensuing drive after making a quarterback change, but netted a field goal for their efforts following two consecutive botched snaps from Chad Henne. Steelers head coach Mike Tomlin was prepared to make a similar change, down 30 with under 10 minutes to play, but quarterback Roethlisberger wasn’t done. He came in for one more drive, but Tomlin pulled him for the final possession.

“We weren’t gonna let him finish on that turnover”, Tomlin said during his post-game press conference, though Roethlisberger’s version of the story was slightly different. “We gave him another series and he went down and got something going, then we took him out”.

Roethlisberger would come back into the game and lead the team’s only touchdown drive, a 17-play, 85-yard effort that was finished off by Diontae Johnson with a nifty 15-yard touchdown, but the drive took nearly seven minutes, leaving 2:54 on the clock.

Tomlin decided to use his timeouts to get the ball back, despite trailing by 26, and when the offense came back out with 2:16 to play, Mason Rudolph was under center. But according to Roethlisberger, Rudolph was already going to be out there on the previous drive.

“That’s Coach’s decision, his call”, the veteran said about why he didn’t finish the game. “He told me I was out on the series before, and I asked him, I said, ‘I don’t want to be done, I want to keep going’. He said, ‘okay’, and then when we came off, he told me I was done, and there was nothing else I could say about it”.

Basically, Tomlin deferred to his veteran quarterback simply to assuage him toward the very end of his career, giving him a shot at redeeming himself, even though he understood they basically had no shot of winning by that point.

What I don’t understand is why Tomlin elongated the game by using his timeouts, even though they had multiple offensive linemen injured and unable to finish the game, when they were going to plug in Rudolph. They didn’t even throw the ball into the end zone on the final play of the game, with no timeouts, despite being in the red zone.

It all had a very fatalistic, pointless feeling to it, not much seemed to make sense in terms of what they were doing, when they were doing it, and why. Were they that desperate to get Rudolph some playing time—all of 10 snaps spanning 54 yards, ending the game at the Chiefs’ seven as time expired on an in-bounds pass over the middle to Zach Gentry?