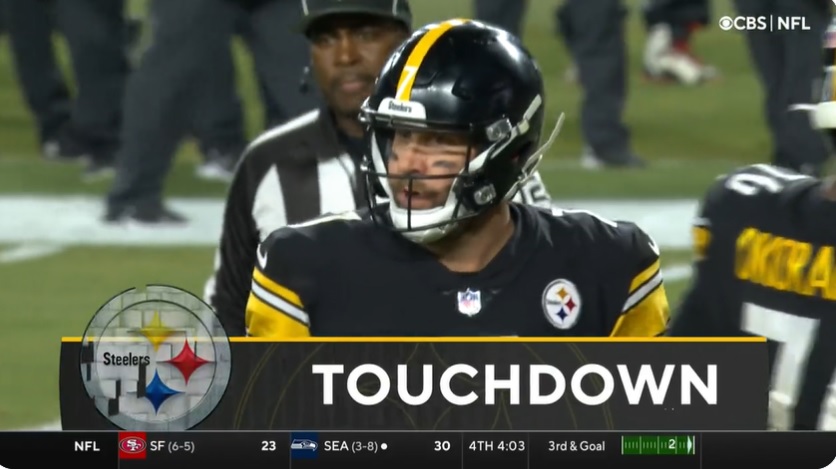 Things seemed rather bleak throughout the first half of Sunday’s AFC North tilt between the Baltimore Ravens and the Pittsburgh Steelers at Heinz Field.

Pittsburgh’s offense was lifeless before standout receiver Diontae Johnson dropped a would-be touchdown late in the first half, a half in which the Steelers ran just 18 total offensive plays while hold the football for just over eight minutes.

Injuries also wrecked the Steelers early in the game, forcing reserve guard John Leglue — just signed to the 53-man roster this week — into the starting lineup at left guard in place of BJ Finney, who was quickly ruled out with a back injury.

Credit to the Steelers though as Johnson bounced back in a monumental way, finishing with eighth catches for 105 yards and two scores, including the eventual game-winner, while Leglue was a pivotal piece in the run game, moving Ravens’ defenders off the spot down the stretch as the Steelers ran behind him time and time again.

That display of heart and responding to adversity drew the praise of one Ben Roethlisberger following the last-second win over the Ravens in what could very well be Roethlisberger’s final game against Baltimore at Heinz Field.

“That’s what I talked about before the game. I kind of told the guys without going into great detail, you can go against teams sometimes that are better than you or equal to you in terms of skill. What’s going to separate you as your heart. And I think tonight, we had guys that showed a lot of heart,” Roethlisberger said to reporters following the win, according to video via the Steelers’ official YouTube page. “He’s [Johnson] one, you know, you drop that ball that he comes back and makes a bunch of tough catches, a bunch of physical, tight plays, running for extra yards. I’ll speak on him, but other guys too. I mean, look, Leglue comes in at left guard early in the game and steps up and does some amazing things. I mean, we have to run the ball on that last drive a bunch. And I mean, we throw, but we had to run the ball and Benny Snell comes in and makes some big runs.

“I told Najee going into the last drive, I think, or the second-to-last one, that he’s going to enjoy this rivalry for a long time. And it’s his opportunity now to set his mark and the physicality of what it means. And I thought he did amazing. So everyone stepped up and made a play today. And that’s, that’s what makes me the most proud of this group.”

One week after essentially rolling over in an AFC North matchup on the road against the Cincinnati Bengals, it was great to see a young team like the Steelers respond in the fashion that they did against the top-seeded Ravens, especially at home in front of a packed house of faithful looking for any sign of life from the black and gold.

Johnson showed serious mental strength to bounce back from a crucial mistake, while Leglue made the case to remain in the lineup in his first action of his career, while guys like Snell and Harris were absolutely pivotal down the stretch as the Steelers ran it right down the Ravens’ throats.

Heart can only take a team so far, but it was so great to see the display of heart Pittsburgh showed Sunday at Heinz Field in a throwback win over the Ravens.