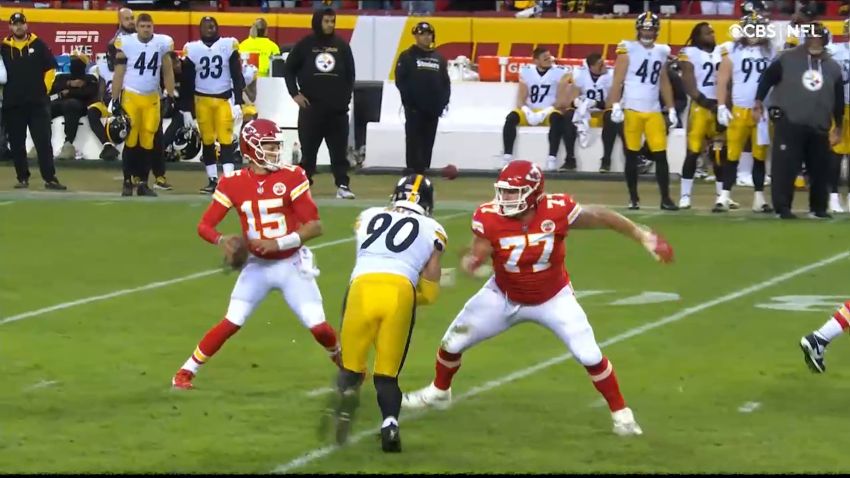 It’s one thing to have to play a truly great quarterback. It’s another to have to play him without the ability to apply much pressure on him. That’s what the Pittsburgh Steelers were facing yesterday against the Kansas City Chiefs’ Patrick Mahomes, especially with a banged-up T.J. Watt.

Inarguably one of the top five quarterbacks in the game at any given time, and likely higher than that, Mahomes had another excellent game yesterday, going 23-for-30 for 258 yards and three touchdowns with a 135.1 quarterback rating. Kansas City was up by so much that head coach Andy Reid pulled him from the game pretty early, inserting Chad Henne, who didn’t even attempt a pass.

Reid called Mahomes’ performance “one of his great games”, noting that he was able to beat the Steelers—which he described as having one of the best pass defensed in the league—in a number of ways, whether it was through the big play or on possession downs or slowly matriculating down the field.

In particular, however, he enjoyed seeing when his offensive line was able to give his quarterback time to throw. The Chiefs threw resources into that well, including trading for left tackle Orlando Brown and drafting center Creed Humphrey in the second round, who has been excellent.

“I love that like a big piece of prime rib”, the notoriously rotund Super Bowl-winning head coach said in describing the plays in which Mahomes is able to push the ball down the field because he has time in the pocket. “That’s how we get excited. When everybody’s working together, you’re tough to stop”.

Watt played through cracked ribs during the game, according to pre-game reports, and had to check out frequently. Especially in the second half, he looked clearly affected, completely stopping in his tracks whenever he was not going to be directly involved in the play, rather than displaying his usual hustle and pursuit.

Alex Highsmith did not have much success against Brown at left tackle, who was voted to the Pro Bowl. Outlets such as Pro Football Focus credit him with generating just one pressure over the course of the day, though it happened to be a sack. Even Cameron Heyward had a hard time against the rookie Humphrey.

The Steelers’ pass rush lives and dies with Watt, this year, and whenever he hasn’t been out there, or has been out there substantially below 100 percent, they haven’t been able to do much to generate pressure, even when they try to blitz.

When you’re faced with that problem against a quarterback like Mahomes, then you’re just feeding Reid ribs. And you know how much he loves that.