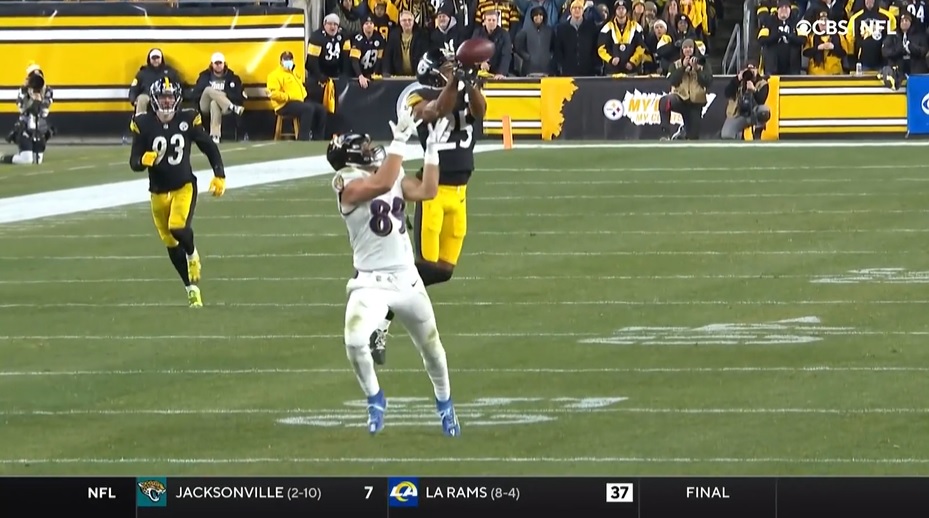 Ahkello Witherspoon has been on the bench for most of the season, barely able to get a helmet on gamedays let alone play. But with Joe Haden missing a third straight game and options limited, Witherspoon got the call in Sunday’s critical game against the Baltimore Ravens. Witherspoon stepped up and played well, highlighted by a key third-down breakup deep downfield on a pass intended for TE Mark Andrews.

“It was one of the chief reasons why we acquired him when we acquired him,” he said via Steelers.com.” He’s a veteran guy who assumed that role in the past. He’s played starting football and played a lot of football. He got on a moving train here. So he had to learn what to do and bide his time and wait for his opportunity. And then opportunity presented itself and he displayed readiness. Which is not surprising by us. He’s been engaged in the preparation process whether he’s had a significant role by playing or not. He’s been highly professional in preparation. We’re appreciative of his efforts and probably not overly surprised by it.”

Witherspoon made his first start since Week 17 of last season while a member of the San Francisco 49ers. He signed with Seattle in the offseason, but struggled there and was dealt to Pittsburgh shortly before Week 1 for a 2022 fifth round pick. Prior to Sunday, Witherspoon had provided very little return on investment, logging just a handful of defensive snaps and not being trusted enough as a special teamer to receive work over Justin Layne.

Until Week 13, James Pierre had served as next man up at outside corner. But Pierre struggled mightily in Week 12’s loss to the Cincinnati Bengals, getting beat for another touchdown, and was sent to the bench. Pierre did not play a single defensive snap against the Ravens, losing out to Layne in dime packages.

Sunday was about star players stepping up combined with newer and younger faces chipping in. T.J. Watt finished with 3.5 sacks and the game-winning pressure while Witherspoon made key plays like those ones, and didn’t get beat deep the way Pierre had. In such a close game against the Ravens, as they always are, the Steelers needed every single one of those plays to get a win. They did, and so their season continues, traveling to Minnesota to play the Vikings Thursday night.