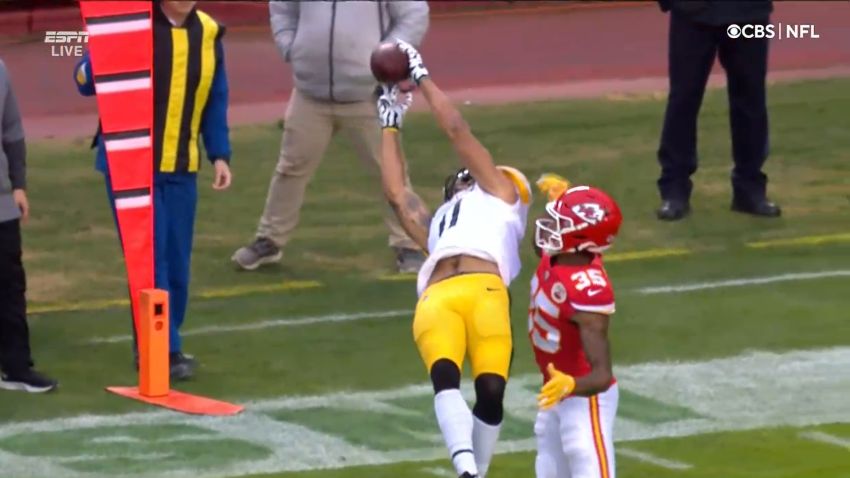 Reasoning: Claypool remains a somewhat enigmatic performer with up-and-down play; however, based on the strength of two fantastic catches that he made in the middle of Sunday’s game, I’m going to list him as trending in the right direction.

Chase Claypool was drafted for specific reasons: To run down the field and to make tough catches, either in combat situations or in the air. Based on that rationale, in spite of the fact that he did have a dropped pass, I think he did was he was brought in to do with his performance Sunday against the Kansas City Chiefs, highlighted by a two-play sequence of excellent body-adjustment catches in the middle of the second quarter.

The first one in particular was huge, given the down and distance. It was 3rd and 8, and the offense had just lost three yards on a busted play to Ray-Ray McCloud. Ben Roethlisberger looked Claypool’s way going up against L’Jarius Sneed, the Chiefs’ impressive young corner, but the second-year wide receiver made a juggling catch on a deep pass down the seam out of the slot for the key conversion.

On the very next play, this time aligned outside the numbers, he was left one-on-one against Charvarius Ward, and made great use of his frame to box out the smaller defensive back anticipating the back-shoulder throw, on which he made an excellent body adjustment to find the ball and showed great hand usage the snag the ball out of the air for 10 yards.

Those are the kinds of plays the Steelers drafted Claypool to make. He needs to make more of them, and make them more consistently. But it’s also worth acknowledging when he does what he was brought in to do. He’s obviously not lived up to the hype in his second season—just one touchdown certainly isn’t going to cut it—but there’s still reason to believe that he can come much closer to his potential in a year or two.