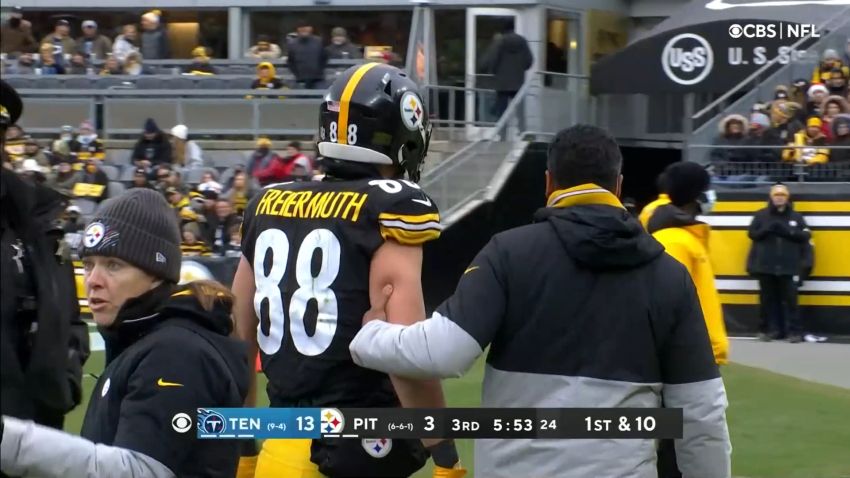 Reasoning: Rookie tight end Pat Freiermuth has not practiced either Wednesday or Thursday while in the concussion protocol, which strongly indicates that he will not be available for Sunday’s game, set to miss the first game of his career.

Just to make sure there is no misunderstanding, this stock evaluation is related purely to Pat Freiermuth’s status for Sunday’s game, and the fact that he has not practiced so far this week is a really bad sign that he will be able to play on Sunday.

Typically, you expect a player who has suffered a concussion to practice at least two days during the week, with the second day being pivotal in demonstrating that he had no adverse effects from the exertion.

When you’re dealing with a rookie, it’s especially important to get that practice time in, something head coach Mike Tomlin often talks about, and so it’s really hard to picture Freiermuth suiting up against the Kansas City Chiefs, even if he is able to be a limited participant today.

But that’s not the worst thing in the world. This is already the second concussion that he has suffered this year, and his long-term health must be placed at a higher priority. If he misses a game, but it helps shield him from a recurrence, then so be it.

Freiermuth did not have to miss a game following his first concussion, and practiced every day of the week, so it’s another bad sign in contrast that he hasn’t been on the field.

Still, that doesn’t mean that he doesn’t still have a concussion and that he is in a physical state right now to be able to play a football game without excessive risk to his health. At this point, even if he ends up being medically cleared, the coaching staff may still hold him out.