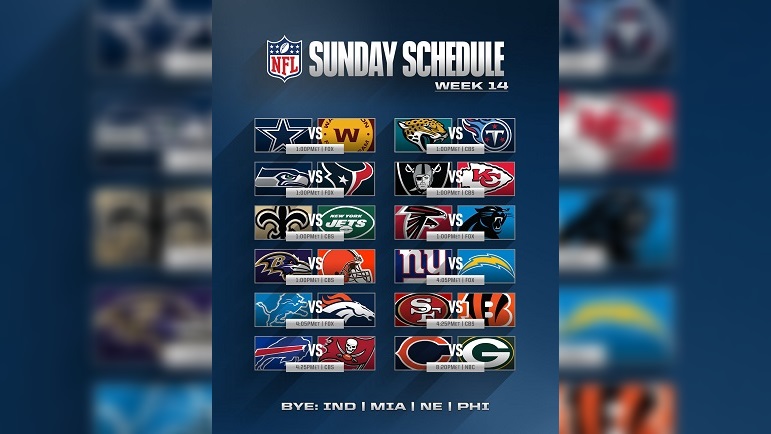 The Pittsburgh Steelers are done with their Week 14 game, which was a Thursday night road loss to the Minnesota Vikings. This now means they must sit back and watch the remaining Week 14 games like the rest of us and root for the best possible outcomes when it comes to those contests that matter the most. The Steelers enter Sunday of Week 14 with a 6-6-1 record and outside of the playoff picture window. There are obviously few other key Week 14 games to pay close attention to on Sunday if you’re into doing some scoreboard watching.  So with that, here’s a look at a few other games Steelers fans might want to pay close attention to on this Week 14 Sunday.

If you’re a Steelers fan, you want the Raiders to just keep on losing so they fall out of the AFC North Wild Card picture altogether. A Sunday loss by the Raiders would result in the Steelers exiting Week 14 ahead of them in the AFC Wild Card race. The Steelers will also play the Chiefs in Week 16 and thus can try to take care of their own business on the road in that contest. This one is super easy when it comes to the rooting guide, pull for the Chiefs to beat the Raiders.

The Jaguars are no threat to the Steelers so that makes this game very easy to decipher. The Steelers, by the way, will host the Titans next Sunday in Pittsburgh. The Titans enter Sunday as the leaders of the AFC South division. Even so, they have the Indianapolis Colts on their heels. It’s safe to root for the Jaguars to pull off an improbable upset in this Sunday AFC South game and then see where things go from there with the Titans and the Colts, who are on a bye in Week 14.

Like the Steelers, the Broncos are still hanging around in the AFC Wild Card race as Week 14 gets into high gear. Steelers fans should be pulling for the Lions to pull off a big road upset in Denver on Sunday. This one is easy because it is an NFC team facing an AFC team.

All four of the AFC West teams are still very much alive with Week 14 upon us. Like the Lions versus the Broncos game, this game between the Giants and the Chargers is an interconference game and because of that, it’s easy to choose sides as a fan of the Steelers. Pull for the Giants to pull off  road upset on Sunday afternoon at SoFi Stadium. It would be great to see three AFC West teams lose on this Week 14 Sunday with the only winning team being the Chiefs.

Another super easy Week 14 game to decipher here. The Bengals are ahead of the Steelers in the AFC North division and with them playing an NFC team on Sunday, it’s easy to announce that the 49ers are the team to pull for in this contest that will be played in Cincinnati. We need both Ohio teams to lose on this Sunday to help the Steelers out.

Are you convinced that the New England Patriots will go on to win the AFC East division? If so, and even if you’re not, really, the right thing to do on this Sunday as a Steelers fan is to pull for Buccaneers quarterback Tom Brady to lead his team to a home victory against the Bills. The Steelers have a much better chance at finishing ahead of the Bills than they do finishing ahead of the Patriots at this point.