Today I wanted to look at how pass defenses have done throughout the NFL in 2021, with different views including success rates, downs, game halfs, and weekly views as well. Let’s jump right in. 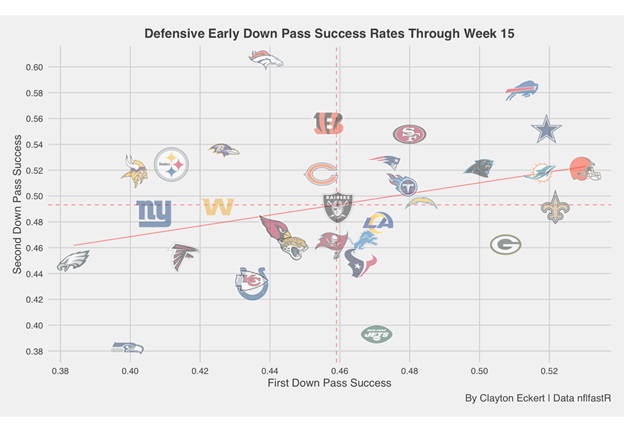 The Pittsburgh Steelers have struggled when defending the pass on first down, ranking 28th in the league in these situations with a 41.2% success rate! This is obviously the most frequent down and a more common rush down, which has been a sorely needed remedy, but the lack of shutting early down passes has been lost in the shuffle in my opinion. On second down, when the likelihood of a pass increases, Pittsburgh has fared well with at a 52.4% success rate which is currently 8th in the NFL!

What about late downs, where third and fourth downs that do not pick up a first down are considered a success? 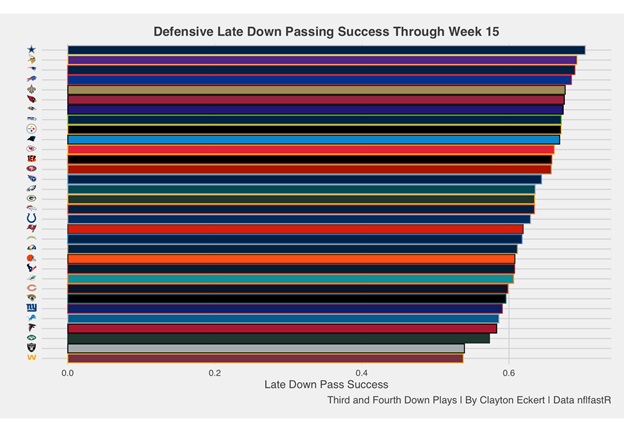 The Steelers also have done well on late downs, ranking 9th in the NFL! This is due to a high success rate on third down especially, while allowing fourth down conversions has been the discouraging factor but the lowest percentage of plays, which is important to point out for context.

Now for total success rates on all downs: 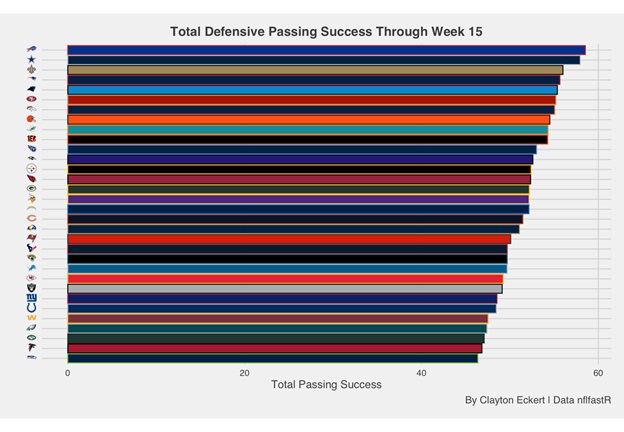 Pittsburgh’s defense ranks 13th in the league in total success rate at 52.4%! So, when they are expecting the pass (second down or later) they have done well, and the area for improvement would be first down. But as I mentioned earlier, it’s understandable and easier to swallow with the focus (while unsuccessful) on stopping the run.

Next, let’s look at the success rates by half: 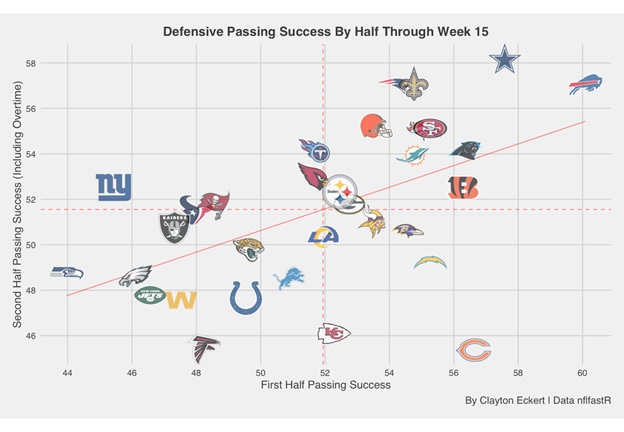 In the first half, Pittsburgh has a 52.5% success rate, ranking 16th and slightly above the mean. The Steelers rank slightly better at 14th and also above the mean in the second half, with a 52.3% success rate. So, no big trends for the Steelers by half, but wanted to include the graph with our upcoming opponents in mind. The Chiefs defense has made improvements as the season has progressed but have struggled in the second half, where the Steelers pass offense has excelled which could play into Pittsburgh’s favor IF the game is close at the end. Also, the Browns defense has fared well overall regardless of situation, and the Ravens struggling more on first down and the second half, which again could bode well for the Steelers offense.

To wrap up, let’s look at a weekly break down for added context: 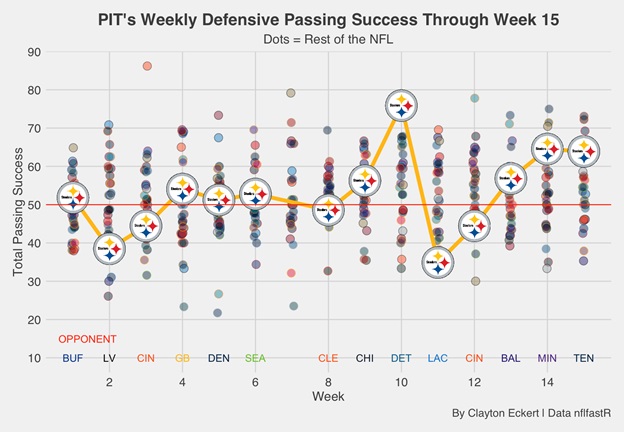 Here we can see how the pass defense has fared in matchups, with their best performance obviously against the Detroit Lions in Week 10, where quarterback Jared Goff barely threw the ball along with a low completion percentage. Pittsburgh’s worst success rate was against quarterback Justin Herbert and the Chargers 41-point performance and nearly 400 passing yards the following week. Earlier in the season, the Raiders and Bengals games were the weaker points, first with quarterback Derek Carr and the Raiders also putting up nearly 400 passing yards along with two below 50% success rate games against Bengals quarterback Joe Burrow in Week 3 and 12, both of which were losses. The trend the last three games has been encouraging, and hopefully the Steelers defense can stay above a 50% success rate against a possibly COVID depleted Chiefs team and two division rivals in this passing league we live in.