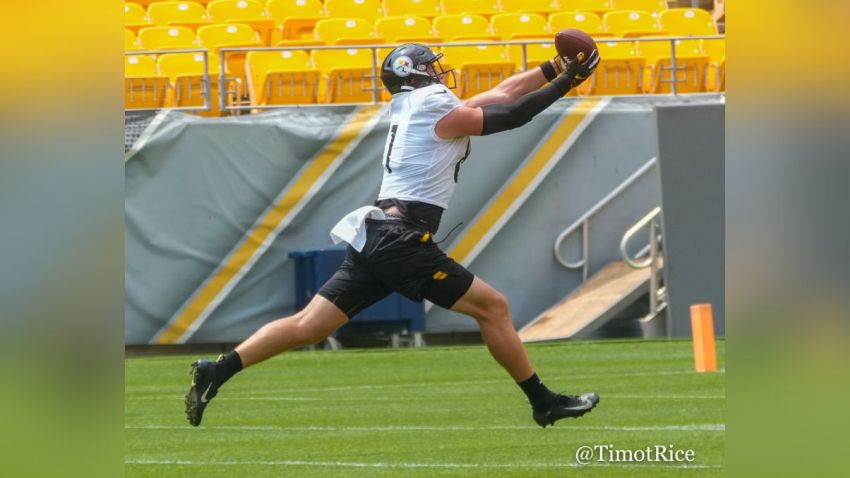 There aren’t too many 6’7+, 260+ pound tight ends in this new world of guys who act and look like wide receivers. But the Pittsburgh Steelers have collected a couple of them throughout Ben Roethlisberger’s career. Matt Spaeth was one of them, a tight end in name only who functioned more like an offensive tackle. In Ben Roethlisberger’s mind, the Steelers now have a similar one in Zach Gentry.

“Zach reminds me a lot of Matt Spaeth,” he told reporters during his weekly Wednesday presser. “A guy that takes pride in this work. Kind of an unsung hero. Maybe doesn’t catch a lot of balls. A lot of touchdowns, doesn’t have big stats, but will always put the team first.”

Gentry has gone from afterthought to maybe the most underrated player on the Steelers’ offense and played his most snaps in a NFL game to beat the Browns. Taking advantage of Eric Ebron’s injury, Gentry logged 45 snaps, 61% of the time, helping the Steelers again run for over 100 yards.

Spaeth was a third round pick of the team in 2007, a John Mackey Award winner at Minnesota but turned into a pure blocker as the #2 tight end behind Heath Miller. Listed with a similar frame to Gentry, Spaeth coming in at 6’7, 270, caught just 42 passes across seven seasons with the team, an average of six per season. Only once did he catch more than ten catches in a season, a primary blocker and good one at that.

In his response, Roethlisberger even slipped up and called Gentry “Matt.” Which is apparently not the first time that’s happened.

“I called him Matt the other day at practice and he laughed at me. Zach pulling and getting his nose dirty on some of the blocks. You reward him with some catches and he’s just a team first guy. And it’s fun to see.”

Gentry should keep an active role in the Steelers’ offense the rest of the season. Snap counts ebb and flow and will partially be tied to game circumstance. But Pittsburgh needs to run the ball well for this offense to be effective and Gentry is the team’s best run-blocking tight end. Better than Pat Freiermuth and obviously better than Eric Ebron.