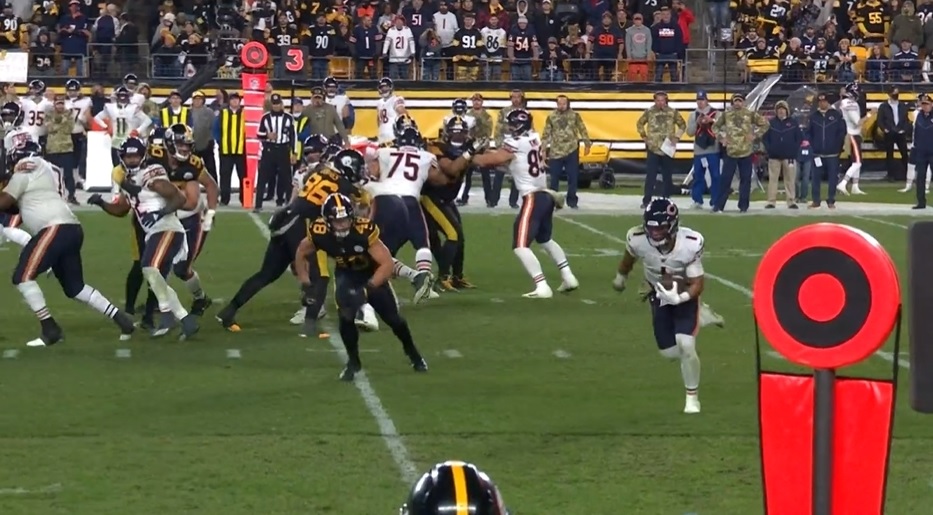 There was little doubt the Chicago Bears were going to try and run the ball Monday night. That didn’t surprise the Pittsburgh Steelers. What caught them off-guard was how they ran it. It’s better to evaluate in a victory than a loss but after the win, TJ Watt admitted the Bears’ gameplan surprised the Steelers.

“We weren’t anticipating many quarterback designed runs,” Watt told reporters after the game. “There were a couple more than we had anticipated, especially in non-situational downs. The Wildcat stuff was a little different.”

Designed QB option runs and Wildcat was primarily how the Bears moved the ball on the ground Monday night. Pittsburgh did well enough to stop their traditional run game but Fields used his legs well, running eight times for 45 yards. Some of that came on scrambles but after rarely being used on designed runs heading into Week 9, Chicago called read-option plays several times against the Steelers.

With starting RB David Montgomery in the fold, they also ran a fair bit of Wildcat. Montgomery averaged 4.8 yards per carry on 13 totes while WR Darnell Mooney had a 15-yard touchdown off a Wildcat look.

To the Bears’ credit, an excellent playcall off a Bash run (Back away from the pullers) that caught the Steelers’ completely off-guard, giving the speedy Mooney a clear path into the end zone.

Fields was sacked three times Monday night, all by Watt, but the Steelers’ pressure ran hot and cold. Watt admitted their pass rush plan needs to be evaluated going forward.

“Obviously he got out of the pocket a couple of times and that’s just something that we have to continue to get better at as rush men. It’s also tougher when we’re seeing chips now on both sides and trying to figure out how to contain with chips. It’s something new for us that I’m sure we’re going to continue to see.”

QB containment was our X-Factor of the game and something Pittsburgh didn’t do a good enough job of despite the win. Fields left the pocket not just to run but also to throw, evident by his go-ahead score to Mooney in the back of the end zone. It’s hard to keep a mobile quarterback in the pocket rushing just four but Pittsburgh will have to figure that out the rest of the way when they play the likes of Patrick Mahomes, Lamar Jackson, Baker Mayfield, and others.