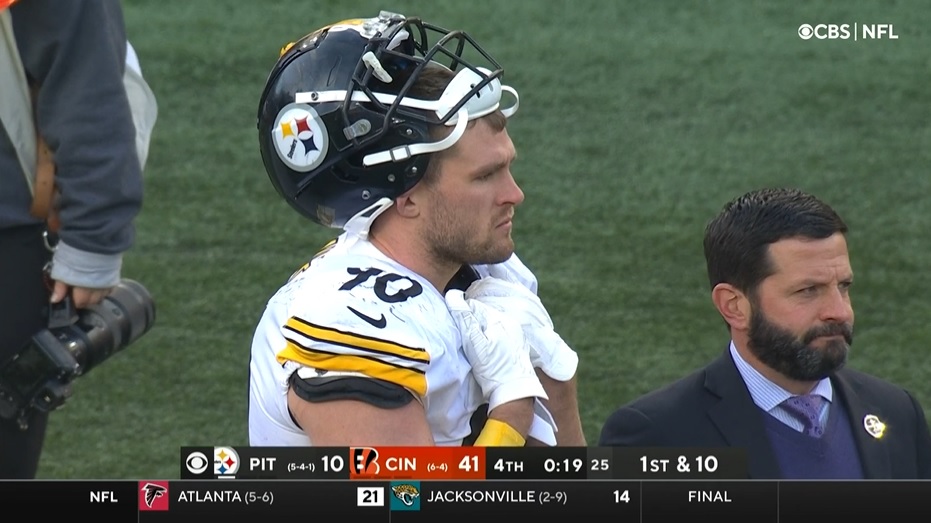 1. TY for DJ – There won’t be many positives here but I think Diontae Johnson deserves a nod. We all know the work he has put in to improve on the drops and his extra work is evident this year. The scary thing to me is how bad this offense would be without him. He’s the only one that can create space and when he doesn’t he has made a ton of contested catches. He has 68 receptions. The next closest wide receiver has 37. Next year’s draft/offseason must focus on receivers who can get open against Man coverage.

2. JV Would Have Been Better – Mike Tomlin likes to refer to poor performances by the Steelers as junior varsity. I wish they had played like junior varsity against the Bengals. That would have been and improvement. This was like a youth football game. They didn’t show up ready to play. If I didn’t have to write this article I would have turned it off at the half. I’m embarrassed for the team for how bad they played.

3. Time To Grow Up – He falls down too much and also had a drop. Only inside the numbers does he say on his feet. When he makes a catch he must draw attention to himself. He lined up incorrectly leading to and illegal formation penalty. He was talking smack to the defensive back down 38 points just before he got called for a facemask pulling off the helmet of the defender. He has lacked physicality all year and then in the fourth quarter of this game you act like that? Chase Claypool needs to grow up.

4. Easy Like Sunday Afternoon – If you can stomach it, I want you to re-watch this game and show me a Bengal player breathing heavy. It’s an unusual I ask I know but that’s how easy this game was. Joe Mixon reverses field and runs for 30+ yard gain and he’s smiling and laughing to the crowd. This was not a challenge physically at any point in the game for the entire Bengal team. It looked like intrasquad scrimmage run at three quarter speed.

5. Watt Did You Want Him To Do? – On the interception that Joe Burrow threw, T.J. Watt blocked Burrow by grabbing him with both hands and holding onto him. When Burrow began to try to get away Watt essentially placed him on the ground. “Placed” according to NFL standards. He could have tried to light him up. He let him off easy. The fact that there was even a though of a penalty was silly.

6. No Fear – NFL defenses that have played the Steelers do not fear the passing offense. The play a lot of Man coverage because they know the majority of the receivers can get open. Not with quickness and especially not with physicality. Ben Roethlisberger almost exclusively throws the ball deep outside of the numbers. The only time they’ve moved the ball the last two games is when they’re down in the second half. It’s going to get worse before it gets better.

7. Run _efense – There was no stopping the run so they don’t deserve the “d” in defense. This was the 8th game of the season giving up 100 yards or more rushing. Since week 8 of 2020 (22 games) the Steelers have given up an average of 134.6 yards per game. The last three week they have given up an average of 195.3 per game. Teams are getting the Steelers in nickel defense and running all over them and there is no quick fix on the horizon.

8. Milk Shake – With Isaiah Buggs out this week Henry Mondeaux got the start at defensive end with Cameron Heyward playing the nose tackle. He is a high effort player and has worked hard to make this team. I can appreciate that. I think I would have preferred to see Isaiahh Loudermilk get the start. Maybe it was due to his groin injury but if he’s okay to play I’d assume he’d be okay to start. In short stints his run defense has been pretty good. If Buggs is out next week maybe they can shake it up and start 92.

9. Fore With Four – It’s well documented the troubles the offensive line has had and it’s another issue with the passing game. Opposing defenses don’t need to blitz because they can get pressure with just four pass rushers allowing seven defenders in coverage. The two rookies you’d expect to have some issues and they have good plays and bad. The left guard positon has now has had three different guys play there with Kevin Dotson out. Trai Turner has not been particularly good. When the defense can tee off on passing downs with four players it’s a problem.

10. Overruling the Veterans – This is pure speculation because I’m not on the sideline but I’m guessing the veterans said they didn’t want to come out of the game. Probably to show they aren’t giving up and I get it. There are still six games to go. There was very little chance to get back in this game the way they were playing. Get the younger guys more game time. Tomlin needs to step in there and tell the veterans, “I need you the rest of the season. You’re out of this game.”