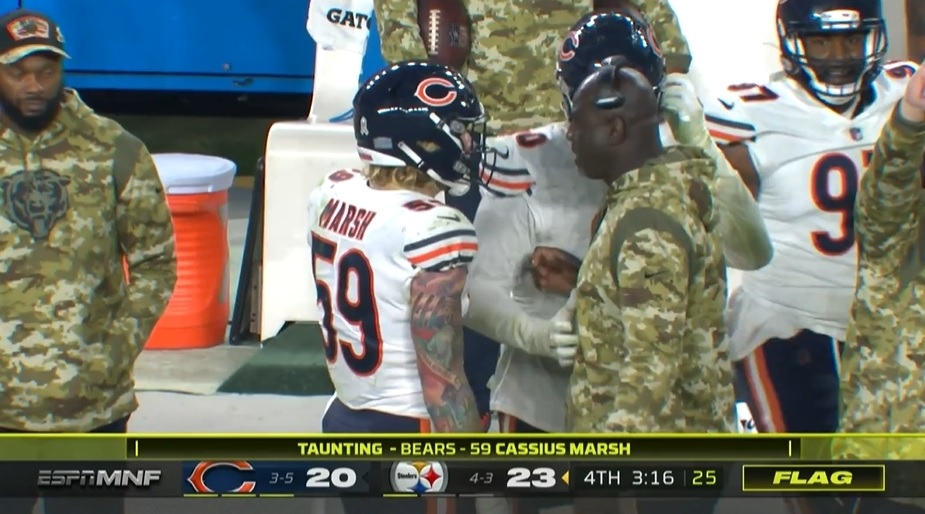 Though not a new rule, the NFL has placed a heavy emphasis on taunting calls this season. It’s created controversy since the season began, and Monday night on a national stage, led to another debate. Former Pittsburgh Steelers’ OLB Cassius Marsh was flagged for taunting after sacking Ben Roethlisberger late in the fourth quarter of last night’s game, wiping out the sack and keeping the Steelers’ drive alive. It resulted in a field goal instead of a punt, critical points in what turned out to be a two-point win.

Asked about the NFL’s emphasis on Tuesday, Tomlin, part of the competition committee, said he supports the league’s efforts.

“We’re just trying to clean our game up,” he said via the team’s YouTube channel. “We embrace the responsibility that comes with being the role models that we are. This game being played at the highest level. We understand that people that play at a lower level watch us and, and often mimic the things that we do and how we conduct ourselves. And just largely as a league, competition committee specifically, there was a desire to improve in that area.”

Marsh, contrary to what some in outside media believe, was not flagged for making contact with official Tony Corrente. Rather, he was flagged for walking towards and staring at the Steelers’ sideline following his sack. Pittsburgh cut Marsh at final cutdowns this summer.

The NFL and officials have had several questionable taunting calls as players and fans adjust to the new “point of emphasis” created by the competition committee this offseason. Bucs’ center Ryan Jensen was flagged for taunting for pointing at this Cowboys’ defender in September, while Bengals’ safety Vonn Bell was called for taunting after saying something to Andy Dalton following a pass deflection. But in Marsh’s case, he wasn’t even close to any one player he was staring down, making the call all the more controversial.

Tomlin said he’s made it clear to his players what is no longer allowed by the league.

“That’s been expressed to our guys. We’ve been shown examples of that throughout team development. And we continue to reinforce that as examples in the negative way turn up during the course of the journey for us and for others.”

Marsh’s penalty will be good teach tape for Steeler players who may now fully understand what little a player could do that will draw him a flag. Tomlin nor the league seems to have any intent on reversing course of the rule, standing by it despite its criticism, so players will have to learn to adjust.