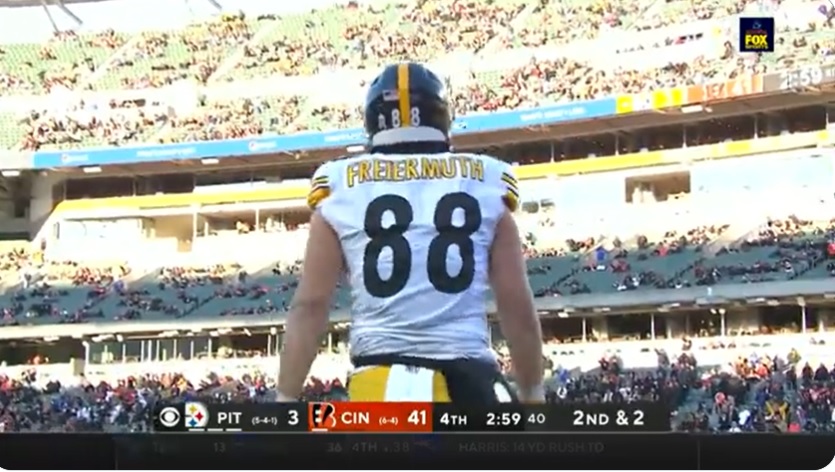 Injuries to insult in the Pittsburgh Steelers’ 41-10 loss to the Cincinnati Bengals Sunday afternoon. In recapping the game, Mike Tomlin went through the post-game injury report. He said LB Robert Spillane is being evaluated with a knee injury while TE Pat Freiermuth is being evaluated for a concussion.

“On an injury note, Robert’s Spillane has a knee injury that’s being evaluated,,” Tomlin told reporters via Steelers.com. “Freiermuth got hit in the head. I think he’s being evaluated for concussion. The rest of it, bumps and bruises associated with play.”

Spillane was ruled out mid-game. It’s unclear when he got hurt or the nature of the injury. If the Steelers are looking to make personnel changes, something Mike Tomlin hinted at post-game, they may not have Spillane in next Sunday’s game against the run-heavy Baltimore Ravens.

Freiermuth appeared to suffer the head injury on the Steelers’ lone touchdown of the game, a meaningless score in the game’s final minutes. He took a big shot from the safety over the top, holding on for the touchdown. Freiermuth stayed in the next snap as part of the FG team before making his way to the sidelines.

There was no flag on the play.

Pittsburgh placed TE Eric Ebron on IR Saturday, meaning he’ll miss at least the next two games and potentially the rest of the season. The only two healthy TEs on the 53 are Zach Gentry and Kevin Rader. Rader did not dress in today’s game. There’s also former third-round pick Jace Sternberger, signed to the team’s practice squad over the weekend.