Today I wanted to look at some data for the season, discuss takeaways for the Pittsburgh Steelers week 11 matchup against the Los Angeles Chargers on Sunday night, and pose some questions for you the readers. 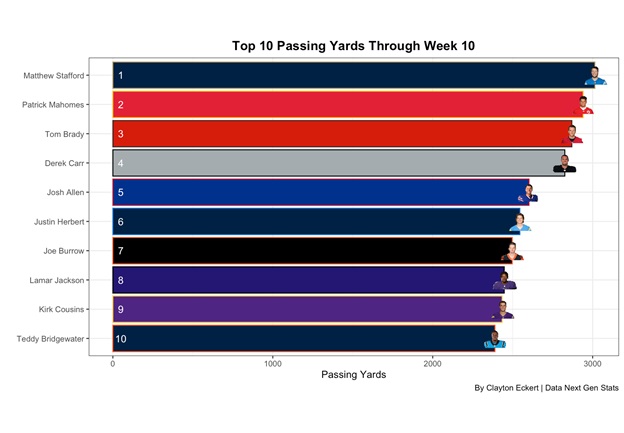 Chargers quarterback Justin Herbert ranks 6th through week 10 with 2,545 yards in nine games, with 19 touchdowns and seven interceptions on 353 attempts. It will be very interesting to see how the Steelers defense performs against the Chargers passing attack, and a quick side note that Pittsburgh’s defense will face one of the above quarterbacks in six out of eight games to finish the season!

Steelers quarterback Ben Roethlisberger has 1,986 yards in eight games with ten touchdowns and four interceptions on 299 attempts prior to missing the last matchup with the Lions, where Mason Rudolph stepped in for 242 yards, with a touchdown and interception on 50 attempts. The big question for the matchup is if Roethlisberger will clear the COVID protocols, likely being announced on Saturday. 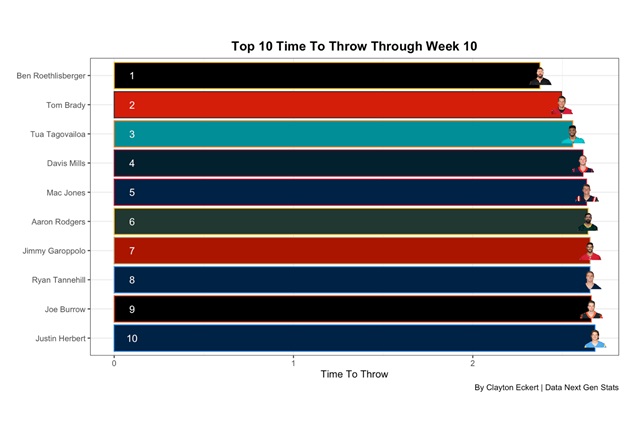 Roethlisberger ranks first in this category, consistently getting the ball out quicker than other quarterbacks throughout the season. I found it interesting that Herbert made the top ten list in this data point, considering his reputation as more of a deep ball thrower which takes time to develop. To highlight this, here are the top five quarterbacks in longest completed air distance: 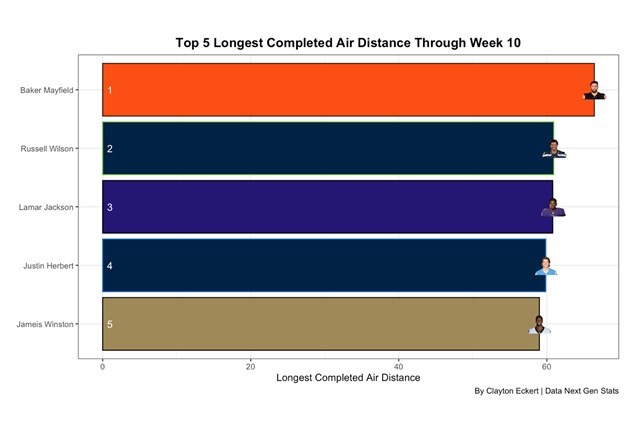 Herbert ranks 4th with 59.9 air yards on the completion! For comparison, Roethlisberger’s longest completed air distance is 50 yards and Rudolph’s longest in week ten was 41.9. How do you think the quarterbacks will fare in the Sunday night matchup? 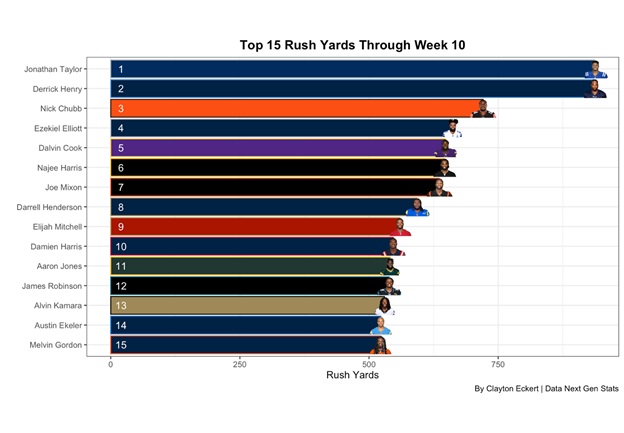 Steelers running back Najee Harris ranks sixth in the league with 646 rushing yards on the second most attempts of 176 and five touchdowns through week ten! Chargers running back Austin Ekeler ranks 14th with 523 yards on 112 attempts and four touchdowns. Let’s add some more context with the following data points: 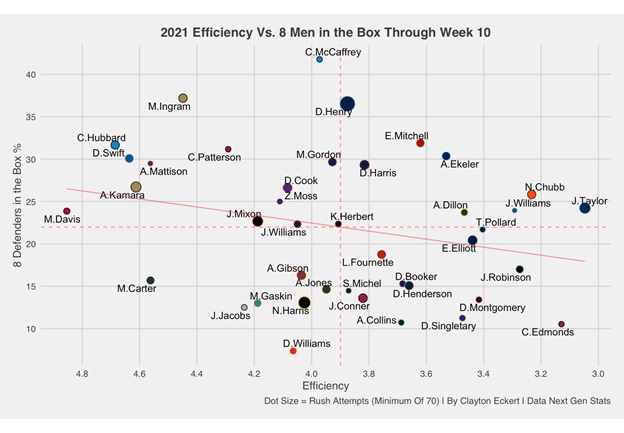 We can see Ekeler fares well in the data points on the top right of the graph, ranking 11th in efficiency and seen eight defenders in the box at the 7th highest rate through week ten. In comparison, Harris lands on the lower left, ranking 25th in efficiency and 35th in eight defenders in the box % out of 39 running backs with 70 or more attempts. It will be very interesting to see what rate the Steelers defense loads the box, and how they generally fare against Ekeler on the ground.

How do you think the running backs will perform in this game? What are your favorite results league-wide?

Next, let’s look at the top wide receivers and tight ends in the matchup using the following data points: 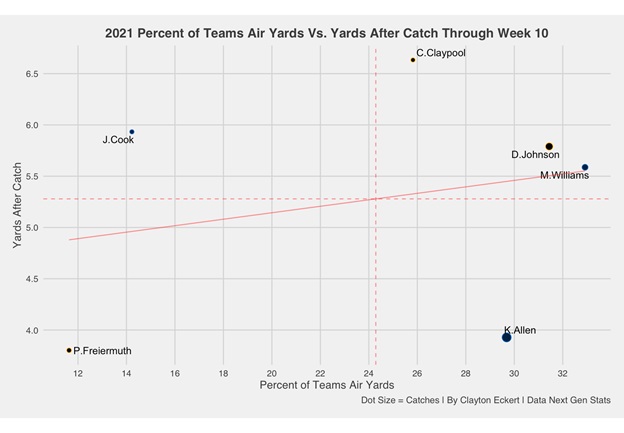 Chargers wide receiver Mike Williams leads the graph in percent of teams air yards at 32.9% along with the 4th ranked yards after catch on his 41 catches, but the second lowest catch percentage of 56.9. Keenan Allen has the second highest percent of teams air yards for the Chargers at 29.7% but lower yards after catch at 3.9 on his 65 receptions, which is tied for 3rd most league wide and the highest catch percentage out of the wide receivers on the graph. It will be very interesting to see how the Steelers cornerbacks perform against the L.A. wide receivers without Joe Haden, who was ruled out for the game on the Friday injury report.

Wide receiver Diontae Johnson leads Pittsburgh in percent of teams air yards at 31.4% with the 3rd ranked yards after catch on the graph on 52 catches and a 63.4 catch percentage. Steelers wide receiver Chase Claypool leads the graph with 6.6 yards after catch along with 25.8% of teams air yards on 29 receptions and a 55.8 catch percentage, the lowest on the graph. Claypool did not play last week due to injury, but now looks likely to play after participating fully at Friday’s practice.

Tight end Jared Cook has an impressive 5.9 yards after the catch for Los Angeles along with 14.2% of teams air yards on his 28 receptions and a 62.2 catch percentage. Pittsburgh tight end Pat Freiermuth has the lowest results on the graph with 11.6% of teams air yards and 3.8 yards after the catch, but leads in catch percentage (76.2) as he done for several weeks on his 32 receptions despite a worse connection with Rudolph in week ten.

Which wide receivers will have a big game on Sunday night? How do you think the tight ends will fare? 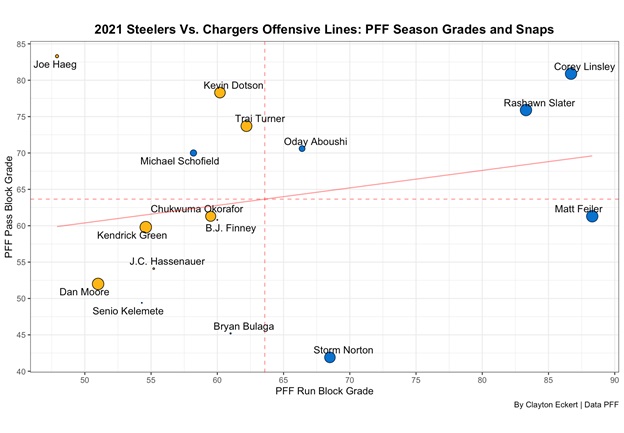 Right away we can see three Los Angeles Chargers have fared very well as run blockers according to PFF, led at left guard by former Steeler Matt Feiler! The other two are center Corey Linsley and rookie left tackle Rashawn Slater, who both have strong pass blocking grades as well! Three Steelers land above the mean in pass blocking: Joe Haeg, Kevin Dotson, and Trai Turner and found it interesting that no lineman for Pittsburgh landed above the mean in run blocking. Dotson is another Steeler that will be out for the game due to injury, and reports point to J.C. Hassenauer replacing him in the lineup.

Which offensive line will win the battle of the trenches?

Both defenses have their share of players that could or will miss the game, the Chargers having three defensive lineman namely Joey Bosa along with Jerry Tillery and Christian Covington all landing on the COVID list. Steelers safety Minkah Fitzpatrick is also on the COVID list along with Roethlisberger, so it will be very interesting to see what both teams announce regarding availability as we get closer to the game. Another big loss for Pittsburgh was announced on Friday with T.J. Watt being ruled out for the game, as well as rookie defensive lineman Isaiahh Loudermilk. It will be very interesting to see what the defensive lineups look like for both teams and how they perform. Injuries will definitely be a huge factor of the game, and which team can overcome adversity to add a tally in the win column for week 11.

How do you think the defenses will perform? Which team do you see winning on Sunday evening? What are your favorite takeaways for the game?