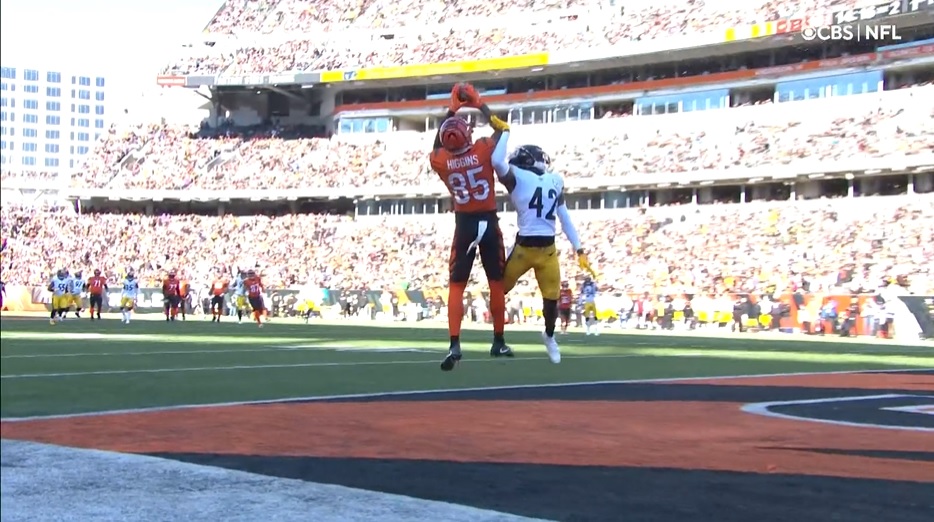 Winners and losers from the Pittsburgh Steelers’ horrible 41-10 loss to the Cincinnati Bengals Sunday afternoon.

Minkah Fitzpatrick: Well, this is a depressingly short list. Fitzpatrick at least recorded his first INT of the season, a low bar to clear in a game as disasterous as this one. That’s something…though the Steelers gave it away on a pick-six the very next play. Of course, Fitzpatrick was also juked out by Joe Burrow on the Bengals’ opening TD, a sign of things to come the rest of the way.

Diontae Johnson: A more legitimate bright spot in this game, though that’s not saying much here. Johnson made a difficult grab along the left sideline and showed his run-after ability, by far the most consistent and dependable receiver the Steelers have. His strong season continues, and he picked up some garbage time stats for all you fantasy owners out there.

Pat Freiermuth: That touchdown was pretty nice, wasn’t it?

Obviously, you could throw a dart and land on someone who struggled today. Here are the worst of the worst.

James Pierre: We billed this as the Pierre redemption game. Maybe next time. Pierre was tested and picked on early, as we anticipated, and he failed with flying colors. Poor ball awareness on Tee Higgins’ jump-ball TD, which turned into more pitch and catch, a low block that resulted in a penalty (at this point, players need to know the new rule changes), missed tackles, and in general, Pierre looked lost on the field, literally getting spun around on at least one occasion. I’m sure our charting numbers in this game will not be kind to him. Joe Haden on half a foot would’ve played better today. Cornerback is a difficult position to play, and Pierre is physically gifted. But he has a long way to go.

To be fair, Pierre is not solely to blame here. Joe Burrow threw at will in this one, just as he did in Week 3.

Mike Tomlin: Since the start of the week, his Tuesday presser, Tomlin made an obvious but crystal clear point. This was a big week for Pittsburgh. AFC North matchup later in the year that will help shape the standings. And the Steelers came out as flat as they’ve ever been. Last week, it was more understandable, and not even nearly as bad. But Pittsburgh got back key players in T.J. Watt and Minkah Fitzpatrick. Not all their key guys – Joe Haden remained out – but that’s not an excuse for how bad this defense, and this team, was today. Getting your doors blown off to the Bengals? Embarrassing.

Unlike Week 3, this team didn’t quit. They simply never showed up.

Run Defense: You can almost write it in pen before each game. The NFL’s worst-ranked defense, by the stats and the eye test, they were run over by Joe Mixon and this Bengals’ offensive line from the very first series. Mixon had over 100 first-half yards, and the Bengals ran at will against the Steelers’ depleted line, which curiously made NT Isaiah Buggs inactive, getting blown off the ball time and time again. There’s no path to seeing this run defense get better. And oh yeah, the Ravens come to town next week.

Ben Roethlisberger/Chase Claypool: Two guys not on the same page today and two guys who obviously had their struggles today. For as physically gifted as Claypool is, he consistently plays small and struggles to make the routine plays routine. There was obvious miscommunication on the first Roethlisberger INT, maybe we’ll find out whose fault that was in post-game pressers. My initial reaction was to blame Roethlisberger, but it’s hard to tell.

Later in the game, Roethlisberger did double-clutch and throw late on a slant to a wide open Claypool, but Claypool acted like he had never caught a football before, juggling it multiple times before it hit the ground. If a receiver is going to put his hand open to signal he’s open, he better make the catch, and that’s one Claypool is more than capable of making, even knowing Roethlisberger wasn’t perfect on that play, either. Roethlisberger and Claypool did link up for a pretty 41-yard grab after the INT and a meaningless fourth quarter jump ball, but overall, their play was disappointing today.

Offensive Line: Where it starts. Pittsburgh couldn’t run the ball even the few times they tried. The gameplan still seemed iffy, going heavy more than I’d like against a Bengals’ defense that will match big bodies up front, but the line got no push. On Roethlisberger’s pick-six, LT Dan Moore got run into the pocket. The play of this line is moving backwards. Literally.

Fans: For having to watch that mess of a game. I’m very sorry.