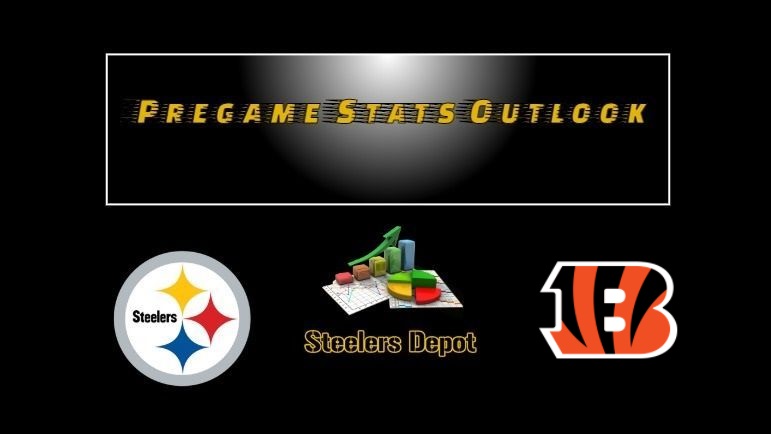 Today I wanted to look at some data for the season, discuss takeaways for the Pittsburgh Steelers Week 12 matchup against the Cincinnati Bengals on Sunday afternoon, and pose some questions for you the readers.

First, let’s look at the quarterbacks using the following data from Next Gen Stats: 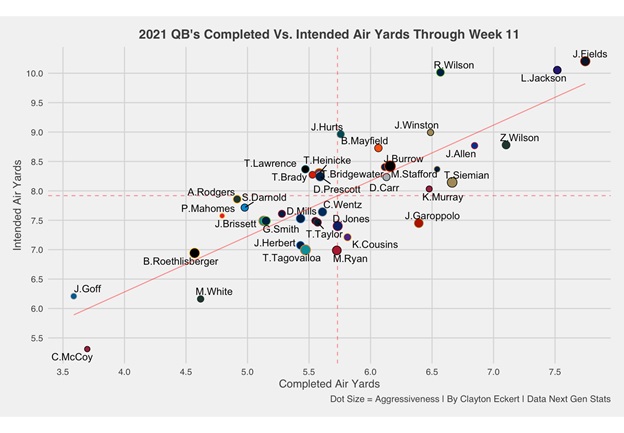 Bengals quarterback Joe Burrow lands on the top right of the graph, above the mean in both air yard data points with an 11th ranked completed air yards number of 6.2 along with an intended air yards number of 8.4 that ranks 9th! This highlights the ability and results Burrow has provided, along with the need for the Steelers defense to be ready for throws around the sticks and beyond. Burrow also ranks first in the league in aggressiveness, meaning he has thrown into tight coverage at the highest rate in the league and is tied for the second most interceptions with 11.

Steelers quarterback Ben Roethlisberger ranks third in aggressiveness, and if the data point holds true in this game we could see a turnover-worthy play (or more) which could change the tide if either defense can capitalize. Roethlisberger has unfortunately hovered around the same air yard results at the bottom left of the graph for the majority of the season, and now has a completed air yards number of 4.6 along with a 6.9 intended air yards number. He also continues to lead the quickest time to throw stat: 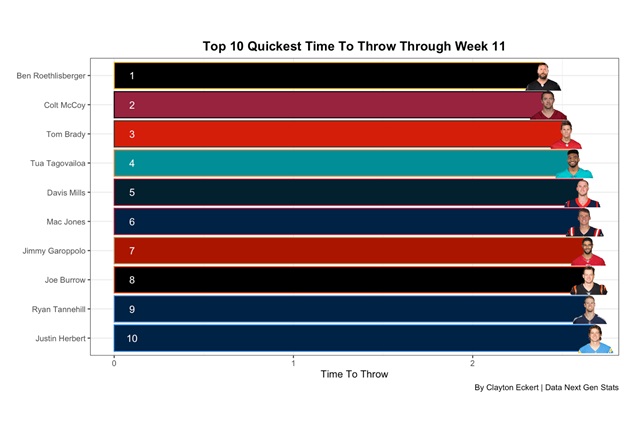 Burrow ranks 8th quickest, which brings the value of his result up considering his higher quality air yards. It will be interesting to see if this becomes a factor for the matchup, with the Steelers pass rush having T.J. Watt this time around vs. Joe Burrow and the passing game highlighted by Bengals wide receiver Ja’Marr Chase. Burrow also ranks ninth with 2645 yards on the season and 21 touchdowns heading into the game compared to Roethlisberger’s 2259 yards, 13 touchdowns, but only four interceptions.

Next let’s look at completion percentage above expected from Next Gen Stats: 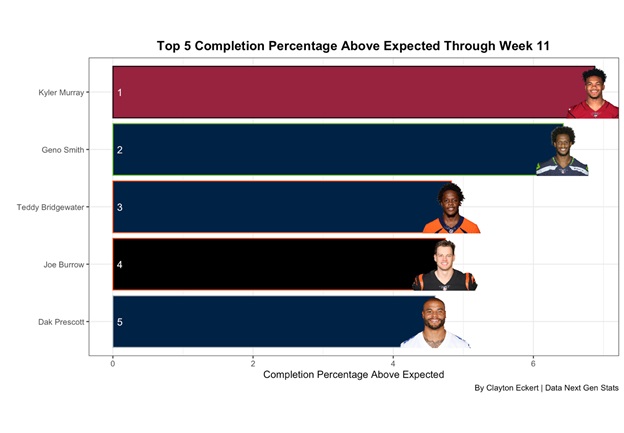 Joe Burrow ranks fourth so far this season, again highlighting the hope and need for the Steelers defense to step up with good rush and coverage with key players returning and hopefully limiting Burrow and the high scoring Bengals offense in the pass game. How do you think the quarterbacks will fare in the game?

Now for the running backs, let’s look at rushing stat leaders for the season: 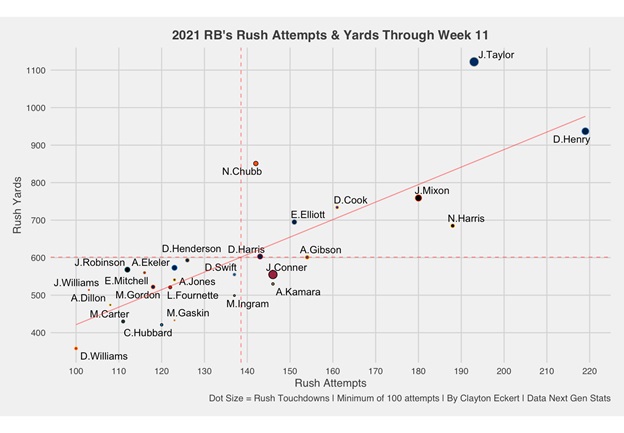 Steelers running back Najee Harris ranks third in rush attempts with 188 along with the seventh most rushing yards at 685 and five touchdowns. Bengals running back Joe Mixon is right below Harris with the fourth most rushing attempts (180) but has maximized those carries in comparison with the fourth most yards in the league (759) and nine touchdowns! It will be very interesting to see how the run games perform on Sunday, can the Steelers offensive line and Harris provide a stronger rush attack without guard Kevin Dotson on IR and his replacement from last week J.C. Hassenauer against a strong Bengals run defense? What about the Bengals run game with a healthy offensive line?

Harris has provided more value in the passing game, with the second most running back receptions in the league with 49 on 62 targets, 337 yards, and two touchdowns. In comparison Mixon has 22 receptions on 26 targets, 194 yards, but also two touchdowns.

Which running back will have the stronger game on Sunday?

I also wanted to provide stat leaders for wide receivers along with the following data point: 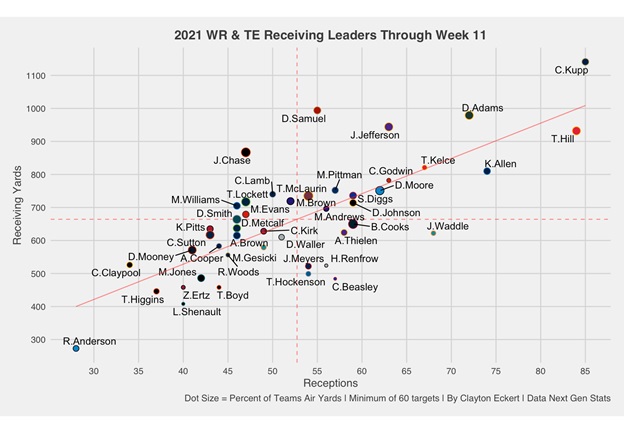 Here we can see Chase has fared very well in the receiving yards category (ranked sixth) on a lower number of receptions (47) compared to his peers at the top of the graph. Chase does account for 43.48% of the teams air yards for the Bengals which is the second most in the league! Steelers cornerback Joe Haden is listed as questionable, so it will be interesting to see which Pittsburgh cornerback will get the most snaps against Chase. Bengals wide receivers Tyler Boyd and Tee Higgins land at the bottom left of the graph, Boyd with 44 catches and 458 yards and Higgins with 446 yards on 37 catches.

Steelers wide receiver Diontae Johnson lands on the middle right with the most receptions going into Sunday’s matchup (59) which is 11th in the league, but lower amount of yards than Chase (714) ranking 17th in the league. Johnson also ranks seventh in the league in targets with 95! It will be interesting to see how he fares considering he missed the first matchup with the Bengals due to injury. Pittsburgh wide receiver Chase Claypool lands on the bottom left of the graph with 34 receptions (less than Boyd and Higgins), but wins in yards department with 526. 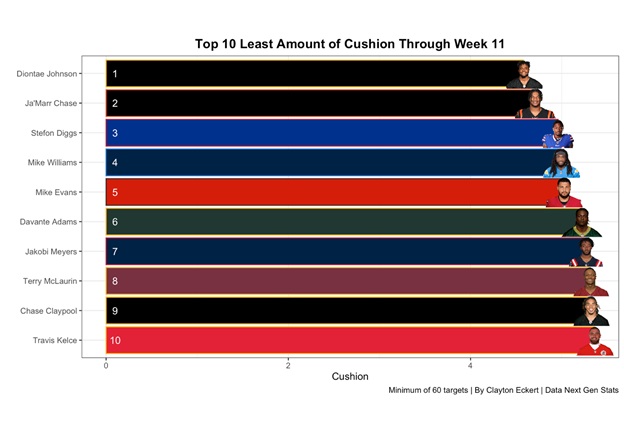 Johnson and Chase have seen the least amount of cushion in the NFL, highlighting the way defensive backs have pressured them at the snap and giving additional context to their impressive seasons. Claypool also made the top ten, which highlights defenses playing the predictable short passing offense of the Steelers in general. Do you think the Bengals defense will capitalize on this?

Four of the top 15 yards after catch leaders will face off in this game: 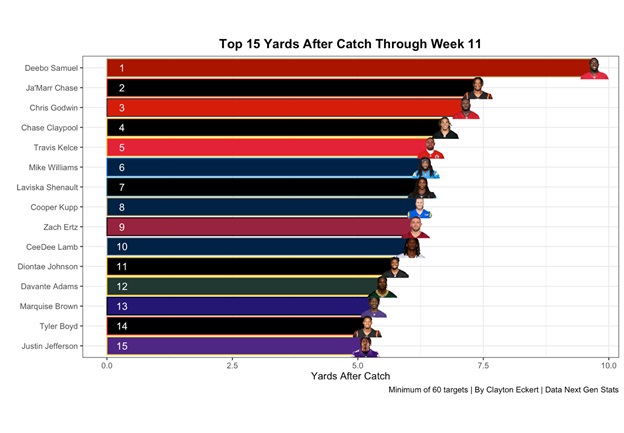 Chase ranks second in the league with 7.4 yards after catch which is even more impressive considering his fourth ranked 14.18 intended air yards! It will be interesting to see if the Steelers defense can limit him as they typically strategize for against primary targets, especially considering safety Minkah Fitzpatrick is set to return and Haden may be unavailable. Claypool ranks fourth, adding great value here last week along with Johnson at 11th and Boyd at 14th. Advantage to whichever defense can tackle the catch better.

Here’s a matchup view for Sunday: 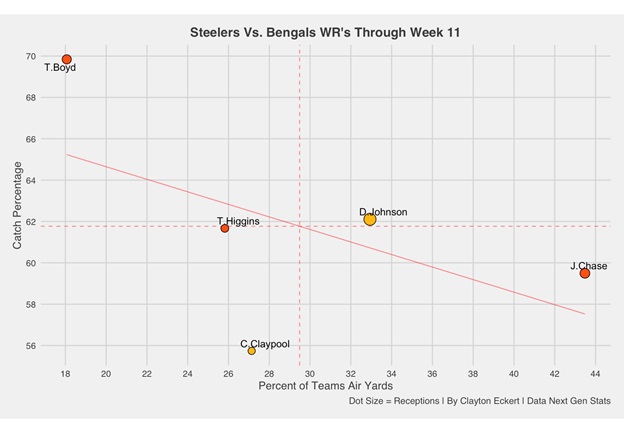 Chase’s lower catch percentage highlights recent success by defenses focusing in on him, here’s to hoping this data holds true against Pittsburgh. Boyd leads the graph in catch percentage, but lowest percent of teams air yards and it would not be a surprise to see him successful on short routes, especially if the Steelers defense focuses their attention on Chase. Johnson has the second-best completion percentage of 62.1 in the matchup, which is impressive considering his high number of targets. Higgins is right behind at 61.7 with targeted air yards similar to Claypool and the latter’s catch percentage suffering.

How do you think the wide receivers will perform?

Next let’s look at the tight ends with a unique view: 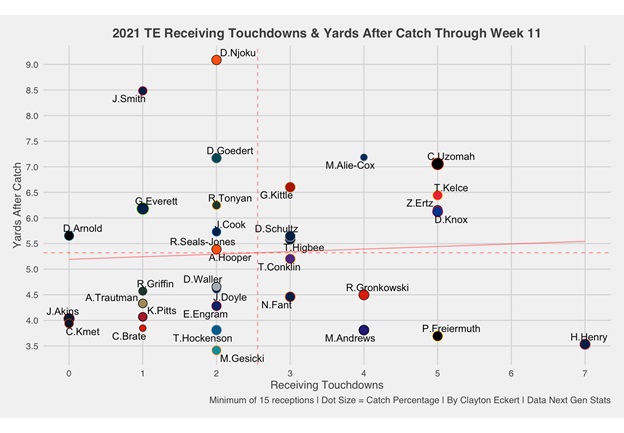 I really enjoyed this view, taking touchdowns and using them to get a stacked plot and compare the best yards after catch for the players along with catch percentage for the dot sizes. For example, Bengals tight end C.J. Uzomah and Steelers tight end Pat Freiermuth have had impressive seasons, both with five touchdowns! The graph highlights their varying style though, Uzomah excelling with yards after the catch and leads all tight ends in catch percentage at 87.1. Freiermuth held the top rank for several weeks to start the season, and now ranks eighth at 73.5% along with a low yards after catch result.

How do you think the tight ends will perform?

For the offensive lines, let’s use Sports Info Solutions to look at blown blocks:

Blown Block Percentage = any time a blocker does not successfully block the defender they attempted to engage with and, as a result, gives the defender an opportunity to negatively affect the play as a percentage 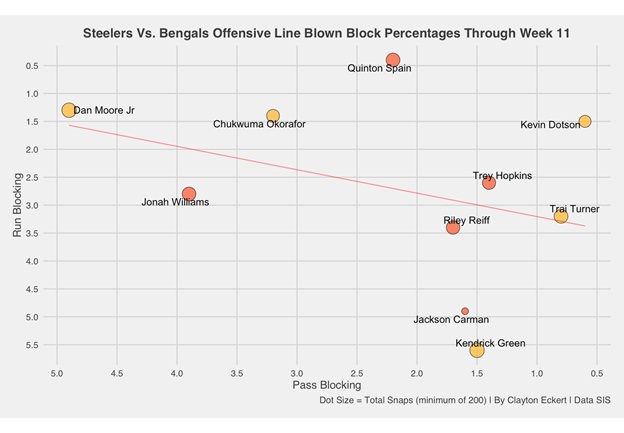 These are the top ten players in total snaps on the season, with Dotson providing the best value for Pittsburgh overall. He has the best pass block result and the best total blown block percentage on the graph of 1.0, again highlighting the importance of his replacement in the game. Steelers guard Trai Turner also fares well in the pass block department but had a worse 3.2% blown run block rate. Pittsburgh tackles Dan Moore and Chukwuma Okofafor fare well in run blocking but blowing more pass blocks, especially the former at 4.9%! Steelers center Kendrick Green has the worst result as a run blocker according to SIS which is also the worst blown block result on the graph at 5.6%, highlighting his lack of consistency on the season.

The Bengals will have starting guard Hakeem Adeniji for only his third game of the season, thus not making the graph. Jackson Carman got the most time at the position in his absence. Fellow guard Quinton Spain leads the graph as a run blocker along with Cincinnati’s best total block percentage of 1.5%, and center Trey Hopkins the Bengals pass block leader. Cincinnati tackle Riley Reiff has fared better in the pass blocking department, but will face Watt who needs a big game for team success. Tackle Jonah Williams has the worst pass blocking result for the Bengals, and here’s to hoping Pittsburgh linebacker Alex Highsmith can capitalize with a strong game after also missing the week three matchup.

Which offensive line will win the trenches? 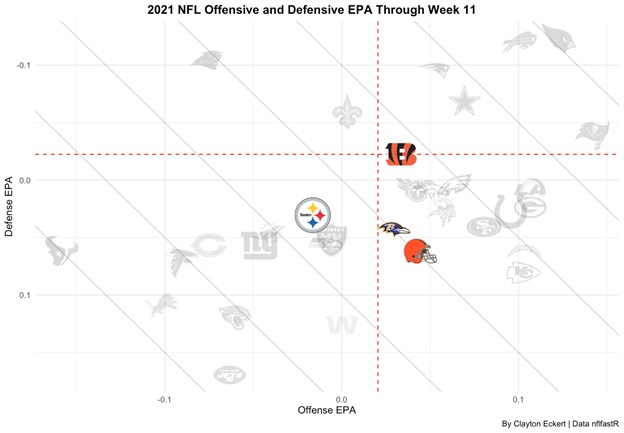 Coloring the AFC North allows us to get great info for the Sunday matchup and looking forward to the remaining matchups with Pittsburgh’s division opponents. The Bengals rank first in the division in defensive EPA, which is right at the mean and ninth in the league! Defensive end Trey Hendrickson leads Cincinnati with 9.5 sacks which is ninth best in the league and here’s to hoping Moore can fare well against him. Their leading tackler is linebacker Logan Wilson with 83 combined tackles ranked 16th in the league, along with a team high four interceptions. The secondary has also been a strong suit highlighted by cornerback Chidobe Awuzie who has a team high eight pass break ups and of course former Steeler Mike Hilton. The Bengals offense is just above the mean in offensive EPA ranking 17th in the NFL and second in the division.

The Steelers rank 16th in defensive EPA in the league and second in the division. Watt is currently second in the NFL in sacks with 12.5 and it will be very interesting to see if he is able to surpass the league leader Myles Garrett this week. Pittsburgh linebacker Joe Schobert leads Pittsburgh in tackles (67 combined) and defensive lineman Cameron Heyward is the pass deflection leader with 7! The Steelers offense is below the league mean in EPA ranking 23rd and last in the division.

If you are interested, here’s a link to my Week 3 Recap following the first matchup. Here’s to hoping the Steelers can come out the victor this time around with an overall healthier squad that has had more time to gel against the even healthier Cincinnati Bengals.

Which team will come out on top Sunday afternoon? Thanks for reading and let me know your thoughts in the comments!