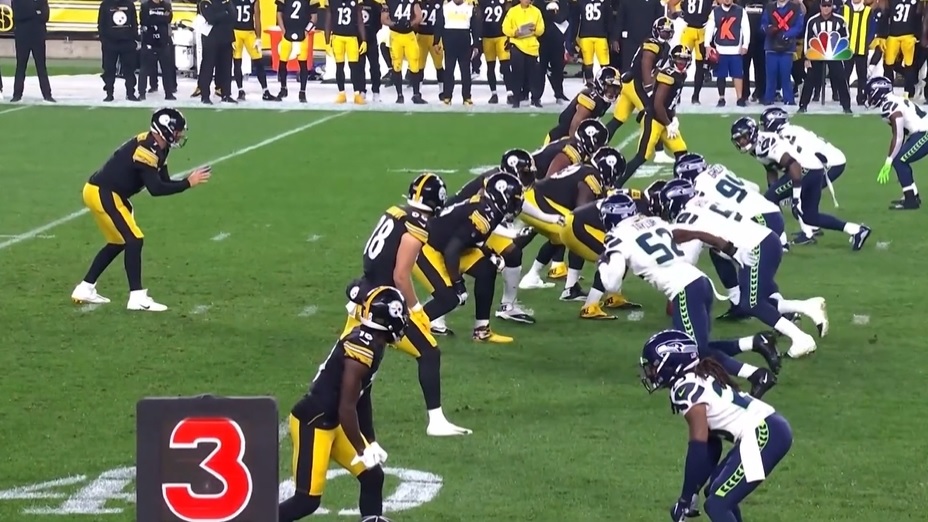 As we’ve done in the past, the keys to the Pittsburgh Steelers winning (or losing) today’s game. Three things that need to happen for them to end up on the right side of the score and vice versa in their Week 9 Monday Night matchup against the Chicago Bears.

1. Justin Fields Doesn’t Beat Them With His Legs

My X-Factor for the game. Fields is doing most of his damage with his legs as a scrambler, not designed runs but taking off when the play breaks down or no one is open. Being able to contain him and force him to make throws from the pocket is critical. If Pittsburgh’s pass rush can do that, Fields is unlikely to do enough as a passer to win the game.

2. Steelers’ D-Line Moves When Gaps Do

To the first point, if Fields stays in the pocket, then the Bears’ run game must function like the top five-ish group it’s been so far this year. Especially if they get back David Montgomery from injury. Similar to last week against Cleveland, Chicago is a heavy zone team with backs who have great vision. Pittsburgh held Nick Chubb and company in check because the D-line flowed and moved with their gap as opposed to getting washed or reached. That’ll again be key tonight.

3. Pittsburgh Wins Its Base Blocks

Don’t see a magical secret for the Steelers’ run game to keep on rolling. They can win up front by being physical and creating movement with double teams. This Bears’ front can be pushed around. Pittsburgh should run a more base and man blocking scheme than zone, and I wouldn’t pull either guard often. Get downhill is the motto here. It’s worked against this Bears’ defense before.

THE STEELERS WILL LOSE IF….

1. Chicago Pulls Off A Fake

Something to watch for over these next two games. Bears have an extra day and they know they’re in a tough spot on the road Monday night against a strong Steelers’ defense. Chicago doesn’t have a lot to lose here, so I could see them pulling off a fake punt or field goal, or offensive trickery. Philly Special or some other sort of double-pass play. The same applies to Detroit next week, but underdogs usually go into their bag of tricks to make a game-changing play.

Mike Tomlin’s discussed it quite a bit, but Pittsburgh’s yet to clean up their penalties. Too many of them last week, especially on the O-line. Should it continue, it’s only a matter of time before it becomes the reason for a loss. Don’t need to get off-script because of a flag that killed a drive before it got going or one that negates a big play.

Week 8 was the worst outing for the Steelers’ special teams of the season. They did it in victory, but it has to be better this week. Better ball security, better awareness, and fewer penalties. Of course, having Chris Boswell back will bring a sense of normalcy to the Steelers’ operation. No fakes this week, Danny Smith.