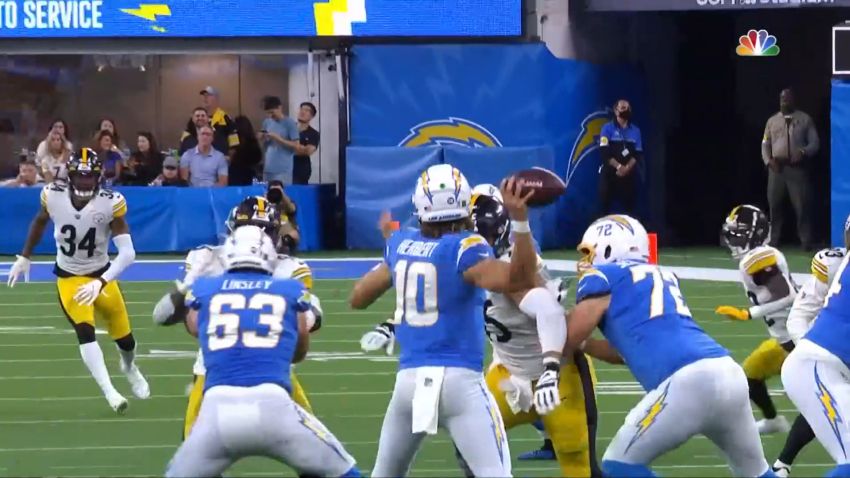 The Pittsburgh Steelers looked like they were in for a long night early on against the Los Angeles Chargers. While they still came up short in the end, though, it wasn’t because they couldn’t catch up—in fact, they could a late three-point lead, before a defensive miscommunication promptly resulted in the scoreboard being flipped.

That has a lot to do with Chargers quarterback Justin Herbert, of course, who completed 30 of 41 pass attempts for 382 yards and three touchdown passes, two of them to running back Austin Ekeler. And he added another 90 yards on scrambles, which proved critical time and time again throughout the game—even though the Steelers prepared for it.

“We just weren’t effective at keeping him in the pocket”, Steelers head coach Mike Tomlin said after the game when asked whether or not Herbert’s scrambling assets were expected. “We talked Tuesday about his mobility and what a factor it was. It wasn’t a surprise to us. We just didn’t perform well enough against it”.

And Tomlin did talk about it on Tuesday. “You see the fluid mobility and easy mobility that he displayed at Oregon”, he said of Herbert. “He’s 6’7” but he’s an easy mover. They do some things schematically to highlight that, some designed quarterback runs, some pocket movements. Even when they don’t, he has the ability to extend plays with his leg talent. That is challenging and creates some challenges for a defense”.

It’s certainly fair to say that it created some challenges for the Steelers’ depleted defenses, which had three guys called up from the practice squad playing prominent roles, and others who have played little and who even have been inactive, like cornerback Ahkello Witherspoon. And that’s where Tomlin’s focus was: on what the Steelers didn’t do, rather than what the Chargers and Herbert did.

“It was us today. It was about what we did or did not do, no disrespect to him or those guys”, he said. “They played, and played well, and won the football game. But that’s always our general approach and attitude. We didn’t rush well enough, we didn’t keep him in the pocket, and we weren’t tight enough in coverage”.

They did enough to briefly hold a 37-34 lead deep into the fourth quarter after trailing by 17 points, but without free safety Minkah Fitzpatrick, cornerback Joe Haden, and others you would expect to see on the field, you knew it was going to be tough to hang on on the road against an explosive offense.