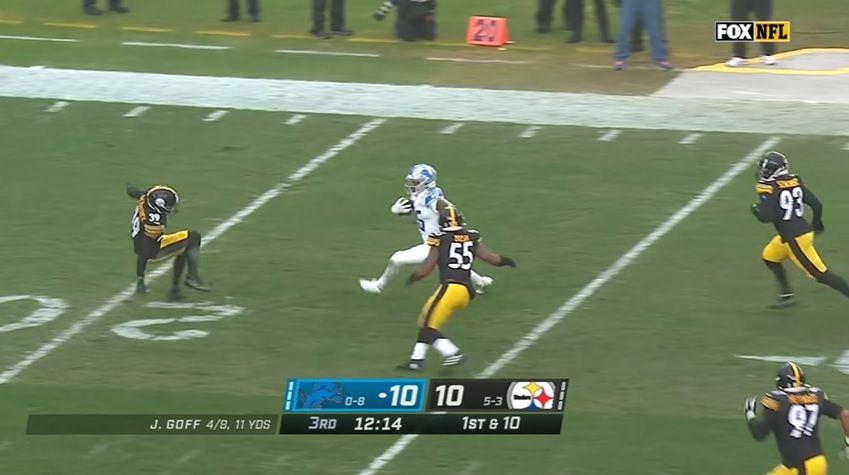 After narrowly escaping the jaws of defeat last Monday night with a win against the Chicago Bears, the Pittsburgh Steelers danced with the devil a little too long with the winless Detroit Lions on Sunday, ultimately finishing the game in a 16-16 tie. While Pittsburgh did not have QB Ben Roethlisberger in this matchup due to being place on the Covid-19 reserve list prior to the game as well as lost T.J. Watt, Joe Haden, Trai Turner, and Kevin Dotson during the game due to injury, the team still should have gotten the win. You can reference the Diontae Johnson fumble or the Pat Freiermuth fumble as turning points where Pittsburgh had chances to score, but gave the ball away, ending promising drives.

However, another “game-changing” play that hurt Pittsburgh’s chances to secure victory in this one came on this pass play in OT where S Minkah Fitzpatrick snags his first INT of the season, but ultimately has it overturned due to a defensive holding penalty on LB Devin Bush. You see Bush is tasked with covering #88 T.J. Hockenson, and instead of flipping his hips to turn and run with Hockenson up the seam, Bush blatantly grabs his waist in attempt to slow him down as Bush’s feet freeze, slowing up the TE just enough for Fitzpatrick to come down and jump the route for the potential turnover to give the offense the short field.

Anyone watching the game Sunday or who took part with the conversation on the Twitter machine came away thinking that this had to be Devin Bush’s worst game as a Steeler, and you would be right. Bush looked like a shell of himself on multiple occasions, getting covered up on blocks constantly as well as showed poor pursuit of the football. Watch this zoomed-in TV view where Hockenson gets a good block on Bush who hesitates at the second level, but once he gets off the block, you watch Bush simply walk behind the runner instead of jumping into the pile with the rest of his teammates in pursuit.

Bush allowed himself to get covered up far too often on the afternoon, something that simply just cannot happen due to his lack of size to take on blocks. For example, on the first TD run by Detroit, we watch as #73 Jonah Jackson climbs to the second level where Bush sits waiting for him but gives Jackson the inside leverage on the block rather than shooting across his face in attempt to pursue the ball going to the left. #28 Jermar Jefferson hits the hole and accelerates in the open field, splitting the two safeties and gets into the end zone for the score.

A similar trend occurs on the second TD by Detroit, this time by #35 Godwin Igwebuike. Bush starts to flow to the football on the snap but gets picked up by RT #58 Penei Sewell. He fails to get off the block as Igwebuike shoots through the hole into the secondary, but Bush manages to pursue from behind. Once he catches up to Igwebuike, however, he tries to wrap up high and swing the runner down rather than running his feet through the tackle, completely whiffing on the attempt as Igwebuike high steps into the end zone.

Here is a zoomed-in version of the tackle attempt where it looks like Bush is trying to grab a bar of soap in a running shower. This missed tackle attempt closely resembles another attempt by Bush in the Bengals game earlier in the season that also resulted in a TD to WR Tyler Boyd.

Bush often found himself going backward against the run in order to get off blocks rather than using his speed and athleticism he was touted for coming out of Michigan to run sideline-to-sideline, working through trash as smaller LBs are supposed to do when lacking size. Here is a good example of this where Bush gets Jonah Jackson squaring him up on a block at the second level, engulfing him with size. Bush decides to give ground and run back to the ball at an angle to avoid the block, getting the runner on the ground, but after he picks up the first. Bush is giving nearly 80lb here to Jackson, which is a losing battle, but he must work around blocks better.

When Bush is unblocked and can run to the football, the dude can make plays. Watch this run stuff on second down where Bush is freed up to come downhill into the gap to stick #32 D’Andre Swift for no gain to set up a 3rd-and-7.

Here is another example of Bush recognizing the play action pass to #14 Amon-Ra St. Brown and redirects to the ball, squaring up as he approaches Brown and brings him to the ground on the wrap up tackle attempt.

Here is a better example of Bush working around the block attempt by #63 Evan Brown, getting across his face and wrapping up Swift to bring him down short of the sticks to force third down.

Bush may give up the first down here on this dump off pass to Swift in the flat, but we see the qualities that made Bush a highly coveted LB prospect coming out of the draft. Bush reacts right at the snap of the ball to Swift breaking to the flat, successfully working around Hockenson and wraps him up at the LOS. The big knock here, as with many of Bush’s tackle attempts on the game, is that he goes high on Swift’s shoulders rather than taking out his motor at his legs or wrapping up and driving through his torso, thus allowing Swift to keep his feet on contact and reach the ball over the line-to-gain before going out of bounds.

Overall, it was a disappointing performance for Bush, adding to what has been an underwhelming season to say the least. Many considered Dave Bryan to be crazy when he said on The Terrible Podcast this summer that he personally wouldn’t pick up Bush’s 5th year option after this season, but now with half a season of film, nearly everyone would be in the same boat. Fellow Steelers Depot contributor Josh Carney shared his draft profile of Bush during the game, stating the same concerns many of us at the site see with his play in regard to being an undersized LB that struggles to take on blocks in the run game and inability to make splash plays in the turnover department.

While Bush is coming off a torn ACL last season and has dealt with a groin injury to begin the year, Bush hasn’t been listed for over a month, suggesting that the injuries that hampered him to begin the season are behind him. Many will point to Bush being just a year removed from the ACL surgery as the reason his play as been so uncharacteristic this season, but I personally believe Bush is being hampered more from the mental side of things than by a physical ailment.

You watch Bush play and he is a shell of his former self out there, been indecisive and not pursuing the ball with much vigor compared to the wild child we saw fly to the ball to start his NFL career. He looks to wrap up high and swing a ballcarrier to the ground rather than blow him up like we have seen in the past. I had a long conversation with fellow contributor Wesley Cantliffe last night, and as someone that has dealt with three significant knee injuries, I can personally attest that the mental damage can be more detrimental than the difficult physical recovery from the injury.

You can go back to the strange tweets this summer or the cat video that went viral to know that Bush has personally struggled mentally coming back from this injury and likely isn’t in the right head space at this time, and it is directly affecting his play on the field. I understand he is paid extremely well to go out there and perform at a high level, but we all often see our performance in our work decline when we aren’t in the right head space, and that likely holds true for Bush who always has that national spotlight on him and has thousands of fans bashing him for his play that he must deal with daily.

I am not dismissing Bush’s play against the Lions as he needs to play better if this defense is supposed to resemble the unit Pittsburgh fielded last season. However, there is no doubt something is wrong with Bush the person, hence the completely different player we are seeing on the field compared to the past. It will be intriguing to see how Mike Tomlin handles this situation and if he decides to sit Bush down and help him address whatever he is going through, or if the proceed “business as usual” and he fails to recapture the player we saw initially come into the league that Pittsburgh made the decision to trade up for in the 2019 NFL Draft.

What are your thoughts on Devin Bush’s performance against the Detroit Lions Sunday? Do you agree that this was his worst performance of his career thus far? Is Bush just another draft bust that will see the door shortly, or do you think that he is dealing with some personal/physical issues that are directly affecting his play on the field. How would you personally handle the situation with Bush going forward. Please leave your thoughts in the comments section below and thanks again for reading!