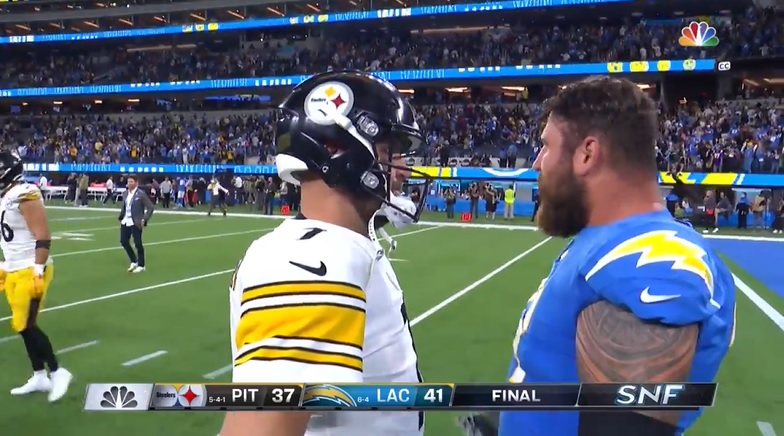 Coming off of his best performance of the season against the Los Angeles Chargers on Sunday Night Football, Ben Roethlisberger is starting to garner some respect once again from the national media.

That includes NFL.com’s Gregg Rosenthal and his weekly QB Index, which saw Roethlisberger jump multiple spots after the 28-for-44, 273-yard, three touchdown performance against the Chargers on national television just one day after coming off of the Reserve/COVID-19 list which included a week of no practice.

“Big Ben gets extra credit for playing his best game of the season after missing practice all week, just when his team needed a big offensive effort,” Rosenthal writes this week in the QB Index. “Then again, it’s worth remembering Pittsburgh had three scoring drives of 11 yards or fewer. The offense went nowhere after the Steelers’ defense turned it over on downs deep in Chargers territory in a tie game and then went backward on the ensuing possession. Still, Roethlisberger hit 2-3 dimes on top of the Bolts’ helmets and mostly moved the ball well. Pittsburgh’s passing game can be both getting better and not enough.”

Roethlisberger was really good on Sunday against the Chargers, earning a “B” from myself in the weekly positional grades piece, which was his best of the season. He hit multiple dimes, as Rosenthal writes, and was truly feeling himself in the loss. He made a number of his best throws of the season and really appeared refreshed without a full week of practice, which sure is interesting moving forward.

Great throw by Ben Roethlisberger. Intentionally a little behind Diontae Johnson to slow him down so he doesn't run into the next defender. #Steelers pic.twitter.com/ZZAUX0FaC8

Despite his strong week, Roethlisberger still remains outside of the top 20 at No. 23 overall in the QB Index, behind the likes of Miami’s Tua Tagovailoa, Washington’s Taylor Heinicke and Carolina’s Cam Newton, the last of which is absolutely puzzling.

It’s a QB Index though, and it’s all week-to-week at this point. I still hold the belief that Roethlisberger is not outside the top 20 of quarterbacks in the NFL, regardless of the numbers, the way it looks, or anything else like that. Hopefully Roethlisberger continues the strong play and truly builds some positive momentum off of the performance against the Chargers.

Should he be able to do that, the Steelers’ offense could really take off overall with a more consistent passing attack.