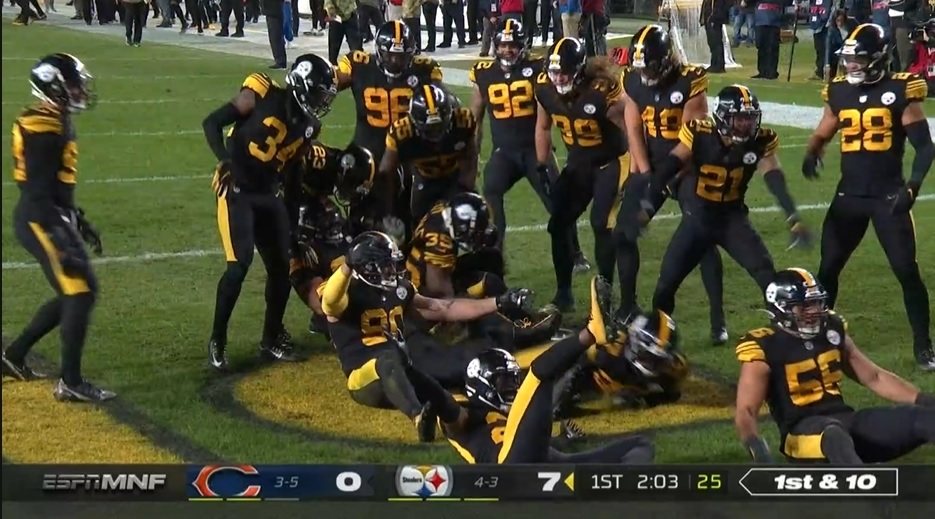 Some Tuesday morning weird for you all after the Pittsburgh – as is routine – weird primetime win over the Chicago Bears Monday night.

– Pat Freiermuth had two receiving touchdowns tonight, making him the first Steelers’ rookie to do so since…Heath Miller in 2005. The similarities don’t end there.

Freiermuth did it at home on a Monday night in a close-game decided by a late 4th quarter field goal.

Miller did it at home on a Monday night in a close-game decided by a late 4th quarter field goal.

And Miller, of course, was at Heinz Field last night. Watching a very similar game to one he played in 16 years ago.

– Since 1990, the only Steelers’ rookie TEs with 2+ receiving scores in the same game are Miller, Freiermuth, and Eric Green.

– Long-time coming for TE Kevin Rader, who caught his first NFL pass Monday night, a one-yard gain on a failed third down. That’s his first reception in a game that counted in nearly four years. Last one came in his college finale, a November 18th, 2017 win over Missouri State where he caught one pass for five yards.

– Some more fun numbers. After not intercepting a pass until last season, Cam Heyward now has an INT in back-to-back years, making him (according to PFR, which I admit can be a little wonky with this stuff) the first Steelers’ d-linemen ever with a pick in back-to-back years.

That means the last two NFL players with 61+ sacks their first five seasons came from the same house. JJ and TJ Watt. Incredible.

– Chris Boswell is the first Steelers’ kicker to be credited with a fumble recovery since Kris Brown in 2001. I believe though Boz’s is much cooler. I hadn’t pulled the tape yet but Brown’s came in an ’01 game against Jacksonville after starting punter Josh Miller left the game with an injury. The fumble came on a 4th down well in Pittsburgh territory so I am assuming Brown had a punt blocked or some other issue with the snap and punt. Someone can probably share the story in the comments.

But there you go. On technicality, Boz the first to do it in 20 years.

– Boz connected from 52 and 54 yards out Monday. Since 1994, as far back as game logs go, Boswell is the first Steeler to ever make a pair of 50+ yarders in one game at home. Only one other had tried it, Jeff Reed in 2010 against Atlanta, connecting from 52 but missing from 55. In fact, Boz is the first and only kicker period – Steeler or not – with a pair of 50+ makes at Heinz Field.