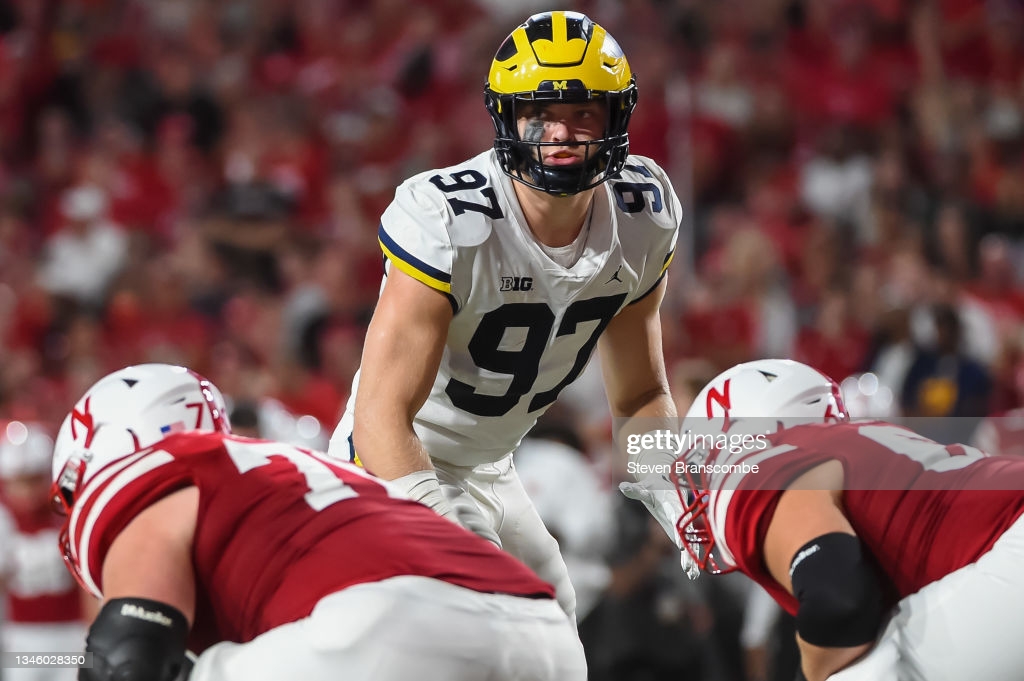 The Wolverines went into Happy Valley and came out with a win 21-17 against Penn State Saturday afternoon. The defense did a great job putting pressure on QB Sean Clifford all afternoon, with pass rushers Aidan Hutchinson and David Ojabo leading the way. Hutchinson had seven total tackles (two solo), one tackle for loss, three sacks, and one forced fumble. Ojabo nearly paced him in production, posting four total stops (two solo) one TFL, two sacks, and a FF. Both EDGE defenders have the size, length, and athleticism scouts love to see coupled with that high motor, relentless effort when rushing the passer, as demonstrated against Penn State.

The University of Miami had two EDGE rushers drafted in the first round last year with Jaelan Phillips and Gregory Rousseau, and there is a good chance Michigan could repeat that feat with these two game-wreckers potentially both hearing their names called on Day 1 of the 2022 NFL Draft.

The Buckeyes took care of business against the upset-minded Boilermakers to the tune of a 59-21 beatdown of Purdue at home in Columbus. While it was a scoring frenzy for the home team in this one, receiver Garrett Wilson stood out in a big way for Ohio State, catching ten passes on 11 targets for 126 yards (12.6 YPR) and three touchdowns while adding in one carry for 51 yards and a touchdown on the ground. It was Wilson’s biggest statistical performance in a must-win game for Ohio State to keep their College Football Playoff hopes alive. The high-flying Wilson is a jump ball specialist that makes acrobatic, contested catches look routine. This performance will help Wilson cement his status as an early round draft prospect.

The Bearcats moved to 10-0 on the season with a convincing 45-28 win over USF on Friday night in Tampa Bay. Sauce Gardner made an impact on the game with one solo tackle, a sack, a forced fumble, and an interception, making splash plays as a pass rusher, tackler, and coverage defender. The sack came early in the first quarter where he came on a corner blitz and jarred the ball out on the big hit from behind on the QB, knocking the ball out as the defense would recover to set up a scoring drive. Known for being a long, lengthy press man CB, seeing Gardner being used as a blitzer must make NFL defensive coordinators laud over his versatile skill set in the league.

I’m going to place a gold star on my chest for calling this one in an article previewing the matchup between Florida State and Miami stating Jermaine Johnson II was in-line for a big day at the office. Johnson delivered on that prediction to the tune of seven total tackles (five solo), four TFLs, three sacks, and a forced fumble. Johnson was constantly in the backfield for the Seminoles in the 31-28 win, regularly defeating blocks as a pass rusher to hunt the QB as well as stack and shed as a run defender to put Miami behind the chains when they tried to establish a running game.

The Georgia transfer was basically unblockable, winning with speed of the edge, with his hand usage, and by countering inside to either sack the QB or apply pressure. Now the leader of sacks in the ACC, Johnson’s stock has soared since his first breakout performance against Notre Dame to start the season, placing himself squarely into the discussion to be one of the top EDGEs off the board after Oregon’s Kayvon Thibodeaux.

The Nevada Wolfpack may have lost the game 23-21 to San Diego State, but QB Carson Strong put together a strong performance that will help his case in terms of rising up the QB draft class rankings. Strong finished the night going 34/48 (70.8%) for 350 yards (7.3 YPA) with three TDs and zero INTs. The yards-per-attempt seem a little underwhelming, but Strong did attack down the field in this matchup, throwing TD passes of 28 yards and 54 yards. Strong also avoided turning the ball over in the game, giving his team a chance to pull off the upset against the ranked Aztecs squad. He may not have the high-end athleticism, but Strong’s arm talent should help him get selected in the top five QBs.