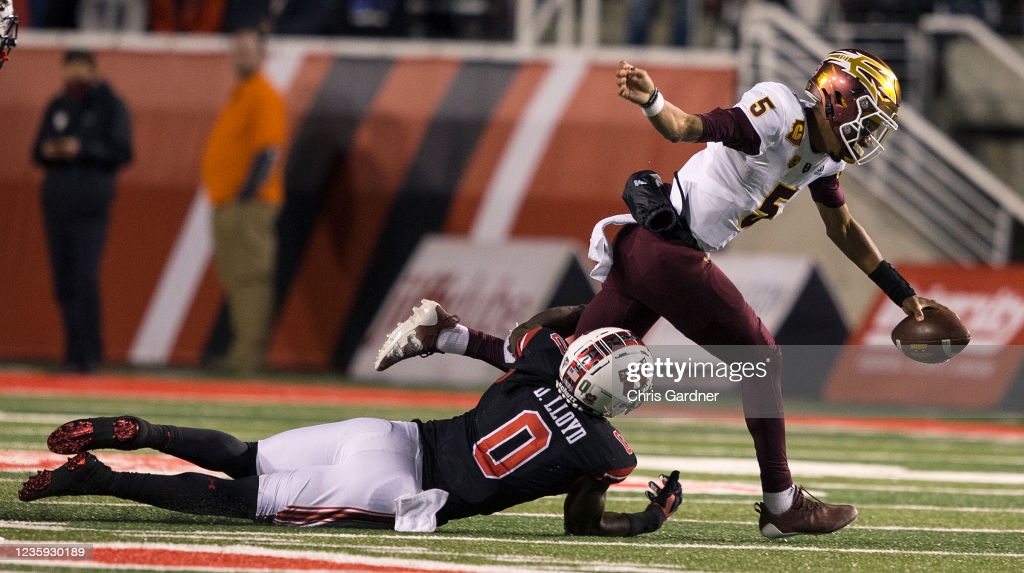 The Utah Utes were surprisingly three-point favorites against the #3 ranked Oregon Ducks heading into their Saturday night matchup in Salt Lake City. The sports book people knew what they were doing listing Utah as favorites as they blew out the College Football Playoff hopeful squad by a score of 38-7, marking one of the biggest wins in program history. LB #0 Devin Lloyd has been a force on the defensive side of the football for the Utes all season, excelling in the splash play department as a coverage defender, pass rusher, and run-and-chase linebacker against the run. While his stat line may not suggest it (six total tackles with four solo stops), Lloyd’s impact on this game exceeds what the numbers suggest.

Lloyd is a versatile linebacker prospect that has the skillset to play in the box as the MIKE, detached from the LOS over the split-out TE, and with his hand in the dirt on the LOS as a rush defensive end. On several of Lloyd’s snaps, we see the stopping power and speed coming downhill as a thumper against the run. One of Lloyd’s highlights of the comes on this big run stop on #26 Travis Dye on third-and-short.  Watch Lloyd shoot through the gap as he decleats Dye, sending him airborne, blowing up the play and forcing fourth down.

Here is an end zone view of the same play, showing the acceleration Lloyd has once he makes the read and drives on the football after benefitting from the missed block by the RG.

On this next play, we watch Lloyd work laterally down the LOS, keeping his shoulders square as he reads the blocks and eventually shoots through the hole on the right side to hit the runner in the backfield, taking out his legs from underneath him for the small loss of yardage.

Here is another example of Lloyd making his presence felt against the run. He lines up as the LOLB and works around the RT climbing to the second level, smoothly sidestepping him as he gets picked up by the TE, but loops around his block attempt right into the ballcarrier who he puts a good hit on to knock him off his feet, taking out his motor and sending him to the turf.

His smoothness at evading blocks should come as no surprise as the Utes often utilize Lloyd as a pass rusher both from the box up the middle as well as with his hand in the dirt as an EDGE rusher. We see his effectiveness as the latter on this pass rush rep where Lloyd whips the LT with a nasty spin move, betting the tackle inside into the face of #13 Anthony Brown, forcing Brown to move out of the pocket and throw an inaccurate ball behind his intended receiver for the incompletion.

Here is another great example of Lloyd’s acumen as a pass rusher off the edge for a “box linebacker”. Watch how Lloyd lines up across from the LT hits the jump/slap/rip combo to get the outside shoulder of the tackle, rounding the corner and keeping his balance as he nearly rounds into Brown who just evades him as he runs out to his left for the check down pass. He may not have finished on these two pass rush reps, but the fact that Lloyd has this skillset as a traditional off-ball linebacker only adds to his value of being able to wear multiple hats for a defense.

Not only can Lloyd be slippery as a pass rusher, but he has the strength and power to hold his own and take on blocks against offensive linemen in the run game. For example, fill in the A-gap as the LT pulls to meet him in the hole. However, Lloyd makes contact with the blocker and stalemates him at the LOS, not giving ground and gets to his outside shoulder.

While Lloyd has the strength to take on blocks and the movement skills to work around blocks, his instincts and flow to the ball can be sloppy at times. He takes a long time to diagnose the play and keeps his eyes in the backfield, slowing down his time to react, react, and run to the ball. Watch on this successful from by Oregon as Lloyd starts inching forward to the LOS to fill a gap, but the back breaks to the right side as the DE fails to break down, giving the runner daylight to the second level. Lloyd likely could have made this play, but he took too long to read the play and gets picked up on the combo block.

Lloyd can struggle with processing quickly on his reads, but also can try to avoid blocks instead of intently taking on contact to make the play. His effort in stacking and shedding does need to improve to consistently work off blocks, but there are several occasions where he intently takes a bad angle to the ball to avoid contact. This occurs on this read option to the left where the runner has two linemen pulling out in front of him and Lloyd tries to work around the pullers rather than make contact and force the runner back inside to the defense. This decision causes Lloyd to miss on the play and allow the runner to get to the sideline and pick up the first down.

Overall, Devin Lloyd’s tape showcases a versatile defender that has great length (6’3, 235lb), speed, and athleticism to make plays against the run as well as in coverage. His six sacks on the season suggest he has some serious chops as a pass rusher for the position, but he’s capable of coverage backs and tight ends having three INTs to his name in 2021. While Lloyd has a propensity for making splash plays, he needs to play faster upstairs in terms of mental processing and be more willing to take on blocks, being able to stack and shed blocks to truly unlock his potential as a off-ball linebacker.

Lloyd has enjoyed a breakout campaign thus far and has rocketed up draft boards at the linebacker position because of it. His talent and upside as a potential chess piece deserve Day One consideration, but how he interviews and sells himself as a mentally versatile player could be the difference between being a first round pick or a mid-round selection with the upside to make a quick impact in the league.

What are your thoughts on Devin Lloyd’s performance against Oregon? Do you think his versatility and measurables will make him an intriguing prospect for NFL front offices come draft season? Could he be held back by mental processing issues or inconsistencies of taking on blocks at the next level? Do you think the Steelers should have interest in Lloyd given the play of their inside linebackers this season and his ability to wear multiple hats? Please leave your thoughts in the comments section below and thanks again for reading!