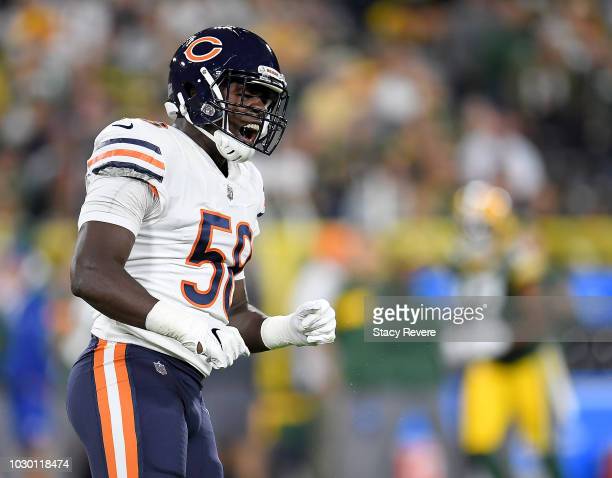 Chicago’s run defense has struggled this year, allowing exactly 1000 yards and a crooked-looking 4.5 yards per carry. They’ve allowed 29 runs of 10+ yards this season, third most of any defense, and six runs of 20+ yards, tied 26th worst in the league. On paper alone, Pittsburgh should be able to run the ball effectively considering the strides they’ve made over the last several games.

The Bears still run what I’d classify a 4-3 front but it’s really more of a hybrid with its edge players able to play hand up or hand down. In a lot of ways, it ultimately looks like the Steelers’ front, listed as a 3-4 but can play like a 5-2 with five on the line and two off-ball linebackers. 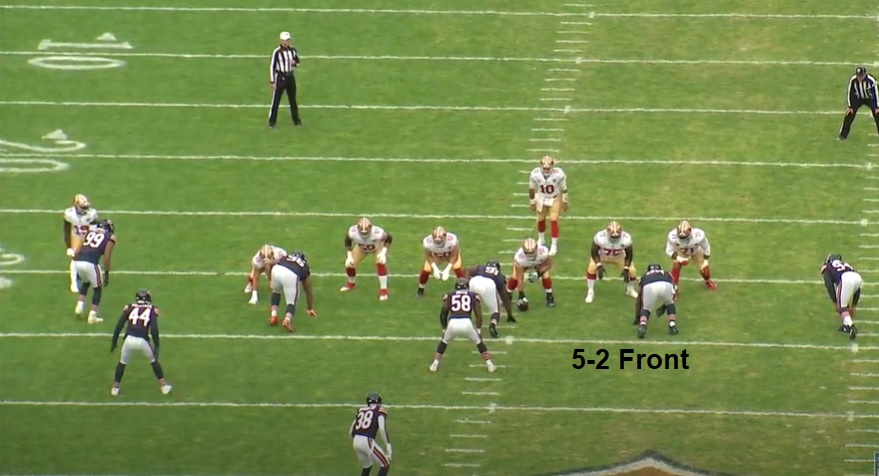 They will show a 6-1 look occasionally as well I saw that against the 49ers against a 6th offensive lineman. Knowing Pittsburgh hasn’t done that, it could be less of a issue to see.

Roquan Smith may be the best available player on the defense right now. An off-ball linebacker we don’t talk about enough, he is tied second in the NFL with 81 tackles and fourth in the league with 48 of them solo. He’s #58 and we’ll talk about him in the pass defense section below.

Overall, I’d recommend the way to attack the Bears’ front by running downhill. Not a lot of zone, not even much gap schemes. Hat on a hat with base and combo blocks and bury ahead. The Bucs had a good gameplan of this.

With gap schemes, the Bears have the tendency to slant and shoot to try to blow up these power runs, making them a risky play.

Some other defensive stats. They’ve allowed 24+ points in five of eight games this season. For the year, they sit at 24.4 points per game allowed, 20th in the league. They’re a slightly below average unit on third down (40.6% – 17th) but have done well in the red zone, the eighth best unit at 53.1%.

An average to below average group that is likely to be without their top safety Eddie Jackson, listed as doubtful heading into tonight’s game. Their pass rush has been strong with 20 sacks, tied fourth most in the league.. 20 of those 21 have come from the d-line. The more advanced metrics here are interesting though. According to Pro Football Reference, their blitz rate is low at just over 17%, 28th in football. Though they’re top five in sacks, they are next-to-last in pressure rat eat 18.6%. Only the Colts were worse entering Week 9. Usually the teams with a lot of sacks also have high pressure numbers.

With Mack being out for Chicago, you may see the Bears blitz more. Watch out for Smith, #58. He appears to be their most frequent blitzer, a big frame and good athlete who they like to be aggressive with. Most commonly came on 3rd and 10.

They have just four interceptions this season, two of them by DBs. No one has more than one.

The Bears are a primary zone coverage defense. They actually do a nice job of disguising their coverages even against motion. Defensive coordinators aren’t dumb and know they can’t always tip their hand of man/zone based on motion. Check out this example against Tampa Bay. The corner travels across here but it ends up being zone, Cover 2. Nice tendency breaker.

It was hard to get a read on when the Bears will use Cover 3 vs Cover 2 vs Cover 6. They seem to self-scout well and aren’t terribly predictable with their coverages. But it’s a predominantly zone scheme across the board. Watch out for late safety rotation from two-high to single-high to try to take away something over the middle. 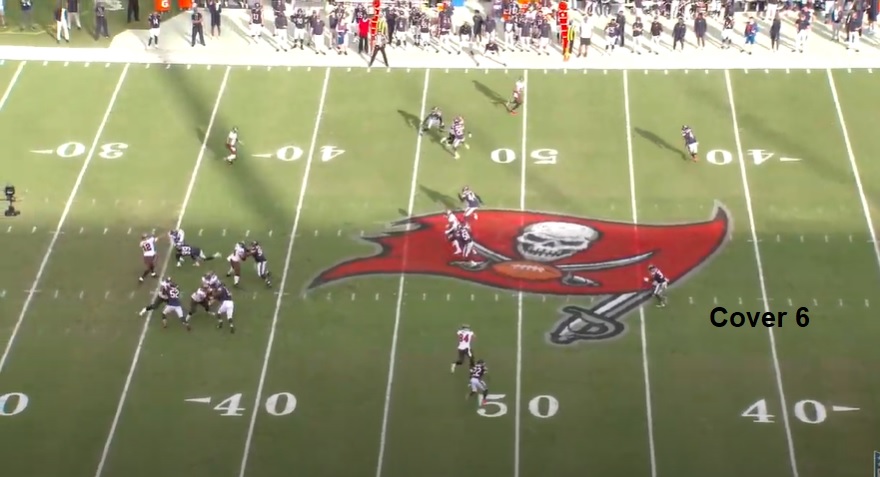 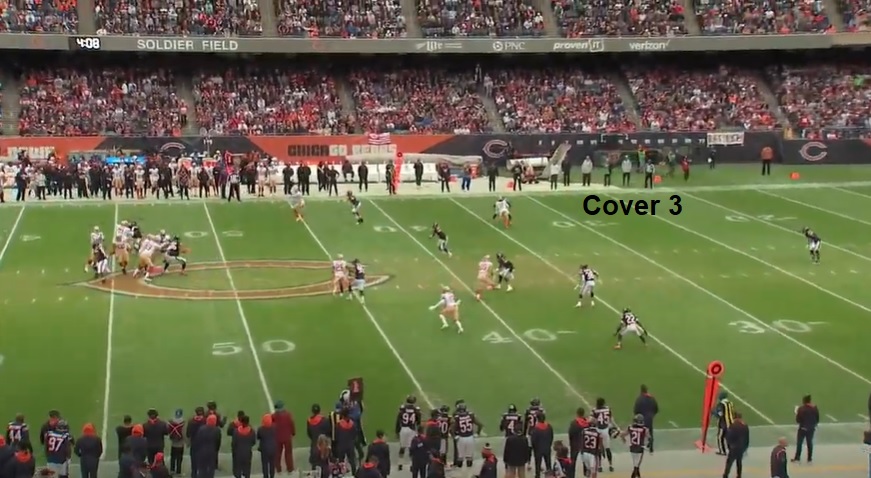 The Steelers face their second opponent from the NFC North when the Chicago Bears come to town. The Pittsburgh offense has not been tearing it up to this point in the season but there may be a chance this week to be more effective. The Bears have several big players with injuries including pass rusher Khalil Mack and safety Eddie Jackson. With or without them the Steelers should be able to score on the Chicago defense. One interesting note from watching the film, watch for players out of their normal position: Mack inside, two OLB on the same side or a DT on the edge. These often lead to the defense running twists or stunts.

Size and strength are common traits in this group. Akiem Hicks (96) leads the way up front and is usually located as the 3/4i technique. He has heavy, disruptive hands solid lateral agility and will pursue all over the field. He will occasionally line up on the edge in some packages. Eddie Goldman (91) is the 0/1 technique and has good play strength, solid hand placement and handles double teams well. Rushing the passer he’ll usually go with power rushes. Bilal Nichols (98) is also a 3/4i technique and has the play strength to collapse the pocket, plays with a good motor and is solid versus double teams and shedding blocks.

The reserves include Angelo Blackson (90) who has good initial quickness and is stout at the point of attack. He’s a bit erratic in his movements but disruptive and will get his hands up in passing lanes. Khyiris Tonga (95) has very good size, reads the run well and is solid tackler on the inside.  He’ll flash during the game and can get a good push inside. Mario Edwards Jr (97) will play the 0 tech in dime or play on the edge to rush the passer.  He has good mental processing and quickness to get into the gaps.

Khalil Mack (52) is the big name in this group and missed last week with a foot injury. He displays very good snap quickness and agility; he uses his hands well and can bend around the edge. He’ll line up on both sides and occasionally inside on dime to run a twist with the other linebacker. Robert Quinn (94) plays on the other side and has a lean build and good snap quickness. He has good agility, wins as a speed rusher and has good counters to the inside.

Trevis Gipson (99) played in place of Mack last week. He is more of speed to power pass rusher but will use a ghost rush as well. He is solid setting the edge and shows good quickness chasing from the backside. Christian Jones (57) is listed at inside linebacker but will play outside as well. He has good speed and good range chasing the ball but struggles to set the edge.

The key player in the middle is Roquan Smith (58). He is an excellent processor of the play, has the range to play sideline to sideline and is a good tackler. In coverage he can handle running backs in Man coverage and also run up the seam with receivers. Veteran Alec Ogletree (44) also plays inside and is a solid tackler has good awareness on screens and can also run up the seam. He’s a glider versus the run and doesn’t attack downhill as much as Smith.

Danny Trevathan (5) is the veteran depth and at 31 years of age still has solid agility, is a solid tackler but in coverage he will give up some space. Caleb Johnson (92) had an impressive preseason to make the team. One of those players who was always around the ball. He has primarily played on special teams but has good athleticism and a good motor.

Smith (58) show off his mental processing, ability to work through traffic keeping his leverage to the inside and making the tackle near the sideline

Jaylon Johnson (33) plays the right corner position and has good size and speed. He’s a physical corner and a free mover with good feet to mirror defenders in Man coverage. He’s a strong tackler and is strong in run support. Kindle Vildor (22) plays on the left side has a thin build, good length and good speed. He has good hands in press coverage and displays very good aggressiveness to the ball in the air. They will rotate him back to the deep safety in some coverage.

Duke Shelley (20) is the primary slot corner. He is undersized, has good quickness and agility and attacks the ball. He has good ball skills but can be a little slow in his transition in coverage. Artie Burns (25) is the veteran backup on the outside. The former first round pick of the Steelers has good length and speed and can be disruptive in press coverage. He’s a solid tackler and mainly plays on special teams now.

Eddie Jackson (4) left the game last week with a hamstring injury and it is unknown if he will play. He will play the single high safety and usually on the right side in split safeties. He’ll play in the box and on the slot receiver. He has range, is a good tackler and ball skills. Tashaun Gipson Sr. (38) plays on the left side and has good route awareness. He plays in the box in dime, deep in nickel or cover slot receivers. He is willing in run support and takes adequate angels coming downhill.

DeAndre Houston-Carson (36) will play all over the field as well including the box in dime and deep in nickel. He has solid downhill acceleration and good speed to attack the ball versus the run or in coverage. Teez Tabor (37) will play the slot in dime and the single high safety. He is willing to take on blocks versus the run and has good athleticism.