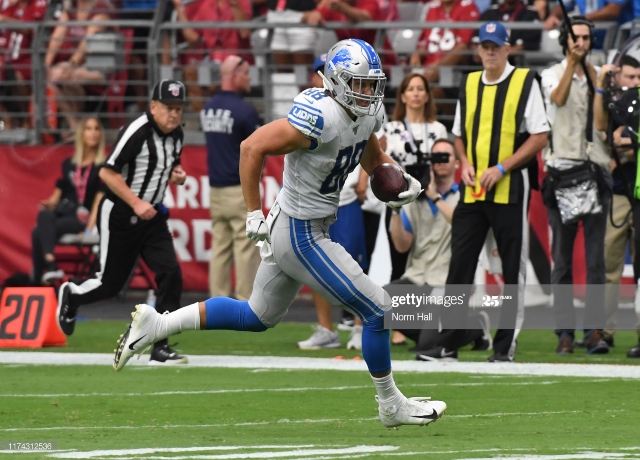 A two-back approach with D’Andre Swift and Jamaal Williams. Each guy with different styles. Swift better in space, more dynamic, and a bigger threat in the pass game. Williams is a bigger, downhill back with more rushing production.

On the year, Swift has played one more game than Williams and it out-carrying him 90 to 71. But Williams has the much higher YPC, 4.4 vs 3.2. On the year, the Lions rank near the bottom in the league in rushing attempts, a product of them being 0-8 and routinely playing from behind. They’ve had just one halftime lead all year, Week 2 against Green Bay, before collapsing in the second half.

As an offense, they have just 21 runs of 10+ yards this season, tied for 21st in the league. Only three of those have gone for 20+, tied for 24th. So run game has not been explosive for them.

Detroit will use a FB and on offense, he’s essentially a pure blocker. #45 Jason Cabinda is a big boy at 6’1, 240. He doesn’t have a carry and just one catch (two targets) on the year. They will use him as a lead blocker. Detroit runs a mix of zone and power. Most common concepts were a toss and gap runs, often run to the boundary side. Here’s some examples.

Watch the counter action in this clip.

I’ve seen some pony backfields with both running backs on the field, the one not carrying the ball serving as a lead blocker. With Swift’s pass-catching ability and the unique skillset of each guy, you could see them both on the field Sunday. 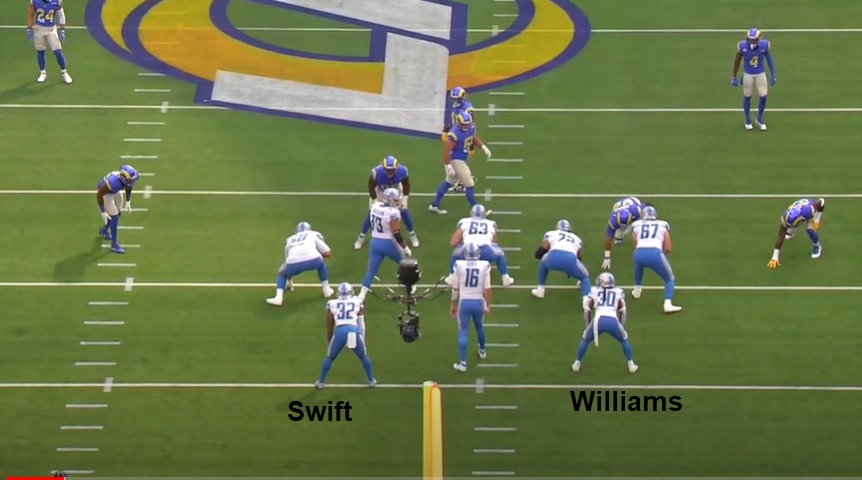 Some other offensive stats. Detroit is averaging 16.8 PPG this season, 29th in the league. Offense clearly struggling. They scored 33 points in Week 1 against the 49ers thanks to a pair of late scores but since then, haven’t been above 19 points per game. Over their last seven contests, they’re averaging just 14.4 PPG. Over that span, Week 2-9, only the Texans are scoring fewer points.

They’re struggling to take care of the football, turning the ball over at least once in seven of eight games. They’ve coughed it up 2+ times in half their games. They’ve also been held under 300 yards in half their games too, four of eight. Situationally, it’s no surprise to hear they’ve been equally poor. 29th in third down conversions (34.3%) and 30th converting in the red zone (50%). Pittsburgh’s defense ranks 8th in both categories so they have the clear edge here.

With new QB Jared Goff, traded for in the Matthew Stafford deal. Goff and the Lions’ offense is completing a fairly high amount of his passes but semi-similar to the Steelers’ offense, they’ve focused on the short game. His 66.9% completion percentage is 13th best in football but his 6.5 YPA is tied for 27th.

One big reason for that is who the pass game runs through. Their top weapons are TE T.J. Hockenson and RB D’Andre Swift. Hockenson leads the team with 48 receptions on the season, second most of any TE in the league, only trailing Travis Kelce’s 54. Swift is second on the team with 47 receptions, the most of any running back in the NFL and 15th of any player in the league.

The top wide receiver on the team is rookie Amon-Ra St. Brown with 27 catches. Never want to underestimate their WRs but Hockenson and Swift, the underneath options, are the ones Pittsburgh really has to slow down. Four different Lions have two TD receptions this season. Like the run game, the pass game isn’t hitting the big-play either. 25 passes of 20+ yards, tied 22nd in the league, and only three completions of 40+ yards.

Conceptually, similar to the Bears, the Lions run a post/wheel concept. Couple times against the Eagles in Week 8, run out of either empty of 3×1. They’ll also run four verts too.

With Hockenson and Swift being their most-targeted guys, they hit them with a good deal of screens, especially in 2nd and 3rd and long when they’re either trying to get into 3rd and more manageable or trying to get YAC on third down with a “safer” call. The first one much more effective than the second, as you’ll see.

One other thing we should note about the Lions’ attack. Watch out for their fakes and Dan Campbell pulling out all the stops. They’ll run as many fakes as anyone. Surprise onside kicks, fake punts, and coming off a bye week as a winless team on the road as severe underdogs.

One week after picking up a win at home late against an NFC North opponent, the Pittsburgh Steelers get a shot to do that once again in Week 10, taking on the 0-8 Detroit Lions who certainly look as bad as the record shows at the midway point of the season.

Led by first-year head coach Dan Campbell, the Lions have struggled to find any kind of traction offensively after trading away franchise quarterback Matthew Stafford in the offseason to the Los Angeles Rams for current quarterback Jared Goff.

With Goff leading the way, the Lions have the No. 25 offense in the NFL, just one spot ahead of the Steelers’ offense.

Detroit’s offense overall looks way worse on film than the Steelers’ offense does though, so take the rankings with a grain of salt.

Goff helped lead the Rams to a Super Bowl not too long ago and signed a massive extension, but without guru Sean McVay calling plays and Pro Bowl caliber offensive linemen and receivers to work with, Goff has looked like one of the worst quarterbacks in the NFL.

Make no mistake though, he can still sling the football with ease and can hit some incredibly tight windows.

Goff has developed real rapport with lesser-known receiver Khalif Raymond, who has taken advantage of a limited receivers’ room to become a top option in the Lions’ passing attack.

That’s one heck of a throw downfield by Goff, and a terrific catch by Raymond, who lays out to secure the football in the two-minute drill.

Goff has really struggled to get into a rhythm in Detroit this season as the offensive line in front of him has dealt with significant injuries and really poor play, a receiver room lacking talent and depth overall, and a play-caller in Anthony Lynn that hasn’t really been creative this season.

That said, the Lions have two burgeoning stars in running back DeAndre Swift and tight end TJ Hockenson.

Hockenson is quietly one of the best tight ends in the NFL, as he’s a legitimate No. 1 pass-catching option and is a terrific blocker in the run game. He continues to get a tough of targets through the air and gives the Lions at least a semblance of a threat up the seam.

The Lions seem to be the poster children for running a successful play-action without having much of a running game.

Twice in three games I watched the Lions gut a defense on play-action without having much success on the ground. Above, the Lions do a great job scheming up a way to get Hockenson open on the crossing route off of play action.

The Lions then ran something similar for rookie receiver Amon-Ra St. Brown against the Philadelphia Eagles. This is where the Lions can win with designs like this, getting their top pass catchers working on over routes across the formation against linebackers who bite downhill on the play-action.

That’s about it though in the passing game as these guys won’t stretch the field vertically and won’t hit many homeruns through the air overall, making them relatively easy to defend overall.

That said, Swift is a real game wrecker and can change the game with one touch on the ground or through the air.

He’s not the fastest running back, but he’s very shifty, has great contact balance overall and his vision is top-notch. This screen pass for a touchdown against the Rams in an all-out blitz should not have gone for a score. His ability to break tackles and set up his blockers well though was the key in the end.

On the ground, he’s just as dangerous.

This is a third and 11 against the Rams, and the Lions basically waved the white flag with the draw.

Watch how Swift is patient, has great vision to set up his block and then has the power and balance to run through tackle attempts to move the chains single-handedly.

He’s a special player and could be a real handful.

Jamaal Williams is a guy behind Swift at running back that I absolutely love. He’s a very tough runner, seems to be the heartbeat of the offense emotionally, and is a fantastic dual-threat guy overall. Williams remains questionable for Sunday’s matchup with a thigh injury, but if he’s healthy he’ll be a player to keep an eye on.

Up front, the Lions have been dreadful. They can really be taken advantage of by the Steelers’ front seven. Here’s how I expect them to line up left to right on Sunday:

Sewell is a clear franchise linchpin for the Lions moving forward. He’s a rock at left tackle and is one of the more impressive tackles to come out of the collegiate ranks in some time.

Outside of the Oregon product though, this line is league-worst.

Jackson is a playable left guard, but Brown and Nelson are absolute turnstiles and penalty machines for the Lions, while Vaitai is playing out of position at right guard and has struggled with athleticism inside.

The line can get some push in the run game, but Goff often has no time at all to throw.

On special teams, the Lions have a true elite weapon at punter in Jack Fox. He’s averaging an absurd 50.4 yards per punt this season and has helped flip the field for the Lions, getting them out of some awful situations this season.

Aside from Fox, the special teams is pretty hit or miss. Kicker Austin Seibert is a decent kicker overall and it helps kicking indoors half the season. He’s 10-for-12 on the year, but he doesn’t have the overall leg to kick outside late in the season. He could struggle at Heinz Field on Sunday.

Raymond handles the punt return duties and is pretty solid back there overall, having stuck in the league this long due to his play as a returner, while Godwin Igwebuike is the kick returner. He’s averaging about 24 yards per return and does have a 41-yarder to his credit this season.