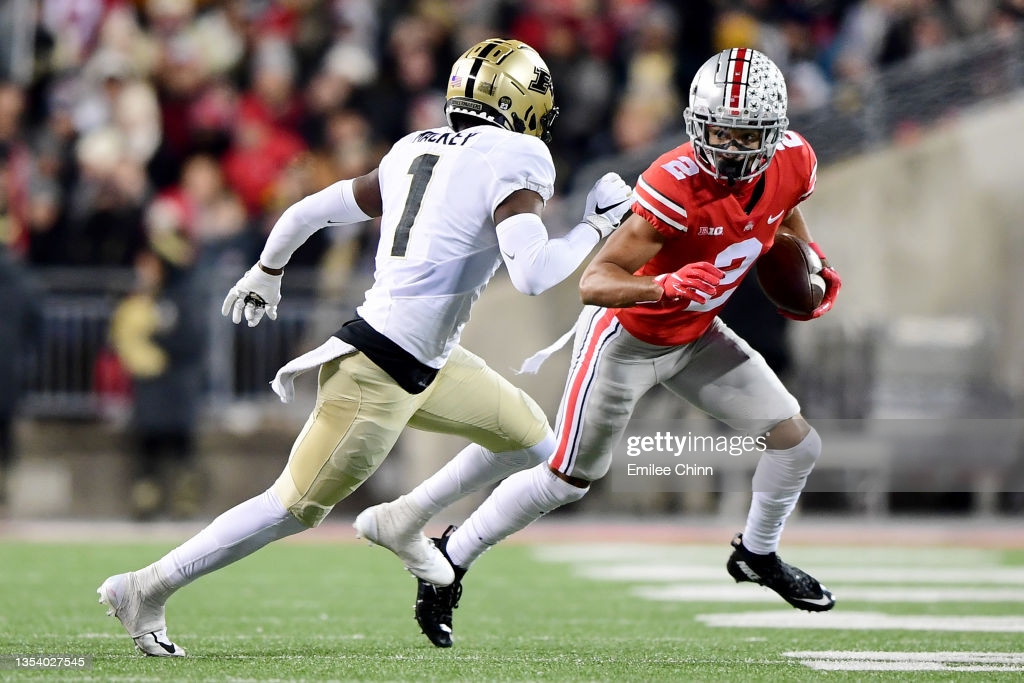 Friday night lights comes to college football with a matchup between American Conference foes Memphis and Houston. For the Cougars, CB #8 Marcus Jones will be the name drawing attention from scouts in this one. The 5’8, 185lb senior has a versatile skill set, excelling as a coverage defender (three INTs in 2021), and returner (two PR TDs and two KR TDs), and even has mixed in as a receiver on offense for the Cougars this season (10 receptions, 109 yards, TD). In a similar mold as DB/special teams ace Avery Williams who came out last season look for Jones to make an impact in the return game as well as at defensive back to warrant Day Three consideration as a nickel/dime defender.

For the Tigers, fellow Steelers Depot contributor Josh Carney put me on the trail of OL #56 Dylan Parham. After watching some of his film, I can say I have become a fan as well as the stout 6’3, 285lb senior excels in the run game, playing with good leverage and feet to move defenders off the ball and create running lanes. Currently placed at guard, Parham has played outside at tackle and is projected to see reps at center at the Senior Bowl in February, making him a versatile OL that may be a little undersized, but makes up for it with good movement skills and strong technique. Should he excel in pass protection, watch his stock continue to rise.

The Demon Deacons are back in the top ten and look to take it to former superpower Clemson in Death Valley Saturday afternoon. WR #9 A.T. Perry will look to help QB Sam Hartman have a big game against the Tigers as his #1 receiving threat. The 6’5, 206lb redshirt sophomore is enjoying a breakout campaign, averaging 19.5 YPR to go along with 11 TDs in ten games played. Perry brings the size and length to be a jump ball specialist, winning contested catches with regularity while having the ability to stretch the field down the seam. If Perry keeps it going against Clemson in this one, we could see him, along with Hartman, declare early for the 2022 NFL Draft.

One player that will be looking to rain on Perry’s parade is CB #23 Andrew Booth Jr. of Clemson. The 6’0, 200lb junior hasn’t had the ball production he has seen in previous seasons, yet he has the prototypical height and length you look for at the boundary corner position with the speed and explosiveness to match. The former five-star WR prospect converted to defensive back and has become a capable run defender, willing to come downhill and put his face in the fan, but also has the coverage ability to run in-stride with most receivers he will face. He is only scratching the surface of his potential and shutting down the Wake Forest passing attack Saturday could do him wonders.

In a battle for the Big Ten Crown and likely berth for the College Football Playoff on the line, the Spartans are going to need a big game from their star RB #9 Kenneth Walker III to knock off the Buckeyes in Columbus. The 5’10, 210lb junior is enjoying a stellar 2021 season tallying 227 carries for 1,473 yards (6’5 YPC) and 17 TDs. Walker had the game of his against the Wolverines in a previous Top-10 matchup, running for nearly 200 yards and five scores. Should he put together a similar performance against the Big Ten Conference favorites on their home turf, Walker can show fans and scouts alike that this season isn’t a fluke, and he deserves high draft capital consideration.

For the Buckeyes, the offense will be led by the combination of QB C.J. Stroud and TreVeyon Henderson who both aren’t draft-eligible this season. However, WR #2 Chris Olave makes up part of the dynamic passing attack who could have declared after last season’s performance but decided to come back to improve his draft stock as well as help Ohio State compete for a National Championship. The 6’1, 189lb senior is a smooth, nuanced route runner who is having a strong season (51/708/11) but hasn’t exceeded the century mark in last four games. That could change Saturday in a potential shootout at The Shoe as we look for Olave to score in his ninth-straight game and top the 100-yard mark against Sparty.

The Razorbacks take on the daunting task of attempting to knock off the second-ranked Crimson Tide in Tuscaloosa Saturday afternoon. If Arkansas is to pull off the upset, they will have to rattle QB Bryce Young. EDGE #55 Tre Williams will be the man entrusted with that task, as the 6’5, 255lb senior transferred from Missouri this season for a change of scenery that has led to his best season. He is explosive off the LOS with his get off, having the speed to round the corner on the tackle as well as the ability to counter inside or convert strength to power to catch pass protectors off-guard. Williams had a great performance against the Aggies, needing him to recreate that moment in this matchup.

The man tasked with keeping Williams as far away from the QB as possible in this game will be LT #73 Evan Neal. The 6’7, 350lb junior is the draft darling for many fans and scouts alike, having the outstanding size combined with the impressive movement skills at his size to be a fluid mover in the run game as well as difficult to get around in pass protection. He started his career at guard and played RT in 2020 before moving to the blindside this season. His athletic traits, frame, and upside make him a Round 1 lock, but a strong showing down the stretch in a hopeful title run could be what makes Neal OT1 in this draft class.

Despite being ranked as the #3 team in the country, the Ducks come to Salt Lake City at three-point dogs against the rival Utes. All-star EDGE #5 Kayvon Thibodeaux will look to prove the sports books as fools in this one, as the talented pass rusher can be a one-man wrecking crew. Having dealt with an injury earlier on this the season, the 6’5, 258lb redshirt sophomore has come back on fire, posting five sacks in his last five games, winning as a power rusher against offensive tackles who can’t handle his unique combination of strength and explosiveness. A stout run defender as well, Thibodeaux is the favorite to be drafted first overall come April and will look to wreck this game early.

On the opposite sideline the Utes will be relying on their own defensive star LB #0 Devin Lloyd to be the catalyst for the upset. The 6’3, 235lb junior is a long, lengthy, do-it-all linebacker with the speed and range to go sideline-to-sideline in pursuit of the ball. Lloyd is equally as dangerous in pass coverage (six PBUs, three INTs, two TDs) as he is as a pass rusher (six sacks, one FF, one FR). He lines up all over the place for the Utes defense, making him a problem for opposing offenses knowing what he is doing on any particular play. Lloyd plays with phenomenal pursuit and has a knack for being around the football, so look for him to have a big game.