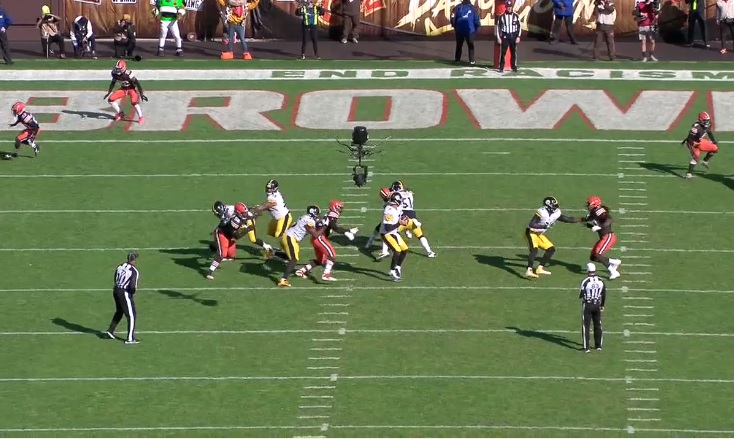 Analyzing the two sacks allowed by the Pittsburgh Steelers in last Sunday’s win over the Cleveland Browns.

Steelers working out of empty here. Couple things to look at, the receivers routes and the line’s blocking. Issues with both. On this play, WRs Ray-Ray McCloud and Chase Claypool appear to be running a scissor route with McCloud crossing over Claypool. But the two don’t time their route and/or depth correctly and run into each other, and that’s where Ben Roethlisberger wants to go with the football. 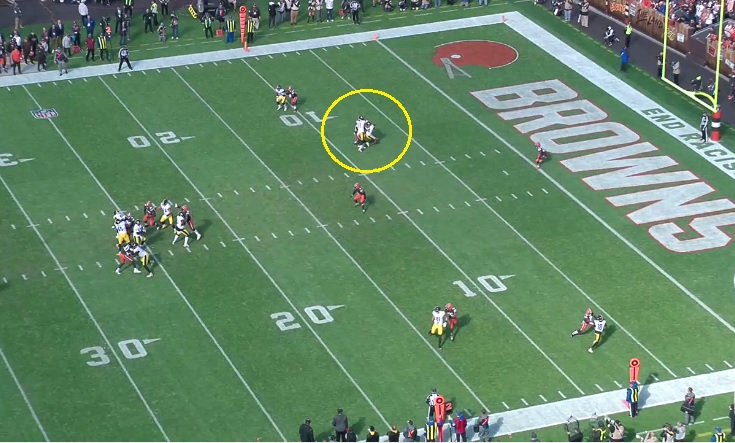 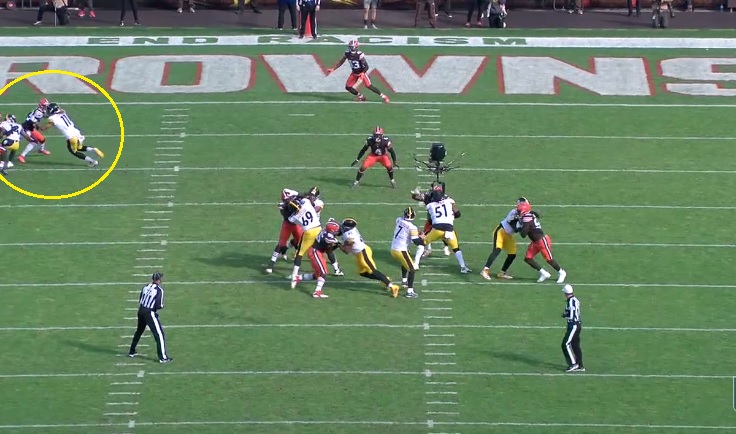 That’s part one. Part two has issues on the left side. Dan Moore Jr. gets walked back by Myles Garrett, but it’s DT Malik McDowell with the pressure and the sack. Initially, Kevin Dotson’s punch misses here initially, but he’s battling before losing McDowell late. I think that’s due to Kendrick Green helping and trying to slab McDowell, which actually seems to knock Dotson off-balance. I don’t fault Green for helping when he’s uncovered. That’s his job. But when you watch the GIF below, watch Green earhole McDowell but then stop. He makes contact and then relents instead of staying on the block.

McDowell uses a sort of hump move to discard Dotson, and with Green no longer blocking, has a free path to Roethlisberger. Roethlisberger has no chance to get away and is dropped.

This one is tougher to judge because there’s a couple things happening here. At most, I break down sack blame on two players/components. Here, I am going to blame the receivers – Claypool and McCloud – for not running their correct routes and slowing down the play.

And I’m going to put the blame on Green for not finishing his help. You could argue to put it on Dotson or even Moore. But if Green would’ve kept working, McDowell is not going to have a free path to the quarterback. Green did well by not being a spectator in pass pro, but he has to finish here. Something he’s normally good at.

Ideally, the Browns’ wide alignment of McDowell is to make it harder for the line to slide to Moore, something Cleveland did over and over again with Pittsburgh in empty (something they did too much of Sunday). But it’s McDowell who gets the sack here.

Blame: Half on receivers, half on Kendrick Green

This one is more clear-cut. Empty set again, though it happens late with Harris motioned out in the flat on the snap of the ball. So Cleveland isn’t aligning a 3T outside of Dotson like you saw above.

Still, Moore gets one-on-one against Garrett. Garrett gets a great jump off the ball, shown below. 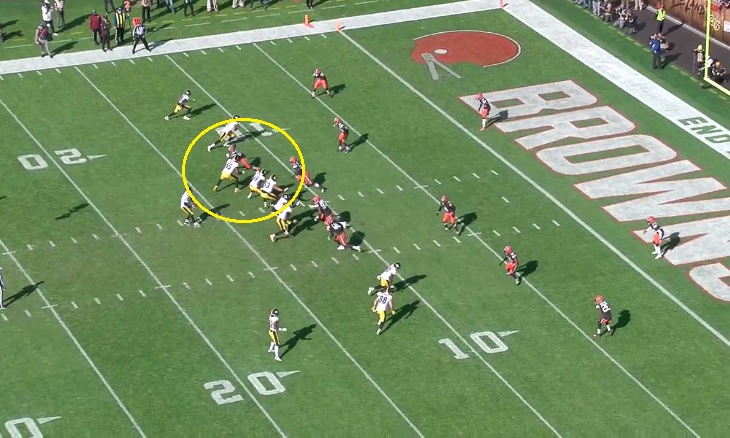 And Moore simply can’t work laterally enough to seal the edge. Garrett does a tremendous job of ripping and cornering through contact, taking a perfect path to the top of Roethlisberger’s drop and sacking him. A high-quality rep here by Moore.

Pretty clear assignment of blame here. It’s on Moore, who allowed several pressures, but this being his only official sack allowed on the day.