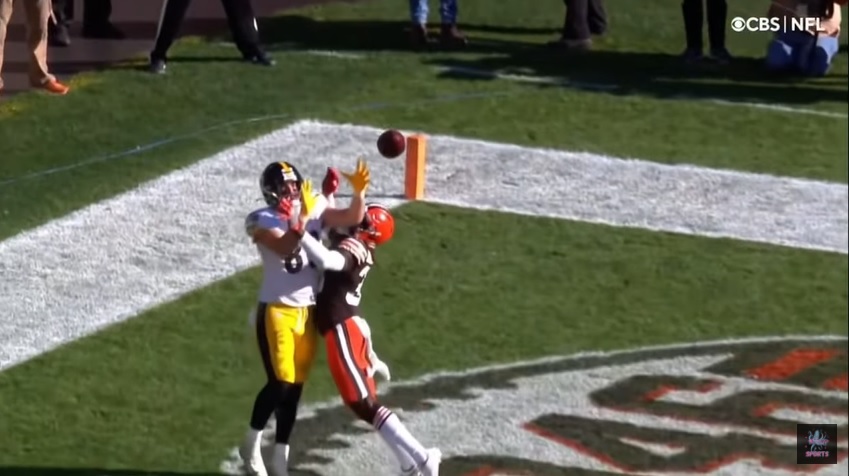 Harris had his third consecutive game with at least 25 touches and 120 yards of total offense. He has also scored in four straight games.  He played 84% of the snaps in the game and played all but two snaps in the second half. The running game was effective in this game particularly up the middle.  The line was able to get a push and Harris weaved his way to find yards and fall forward for even more. Liked his effort on the Chase Claypool end around to read the end of the line of scrimmage for blocks and then get out and lead block.

He handled all three of his targets hauling passes on two screens and a sneak route.  He used his blocker well on the screens and the sneak route produced 17 yards after the catch with a nice stiff arm at the start and mush of the defender at the end. He was asked to do more pass protection in this game and while his awareness was very good the execution was so-so. He had a solid chip earlier in the game but an attempt to chip Myles Garrett ended with Harris on the ground. His best rep was on the touchdown to the rookie tight end and without Harris’ help that pass doesn’t get thrown.

This is the touchdown to 88 but focus on Harris (22). He gets moved to the left side and at the snap is looking to the right but shows very good awareness to come back and help on Garrett or else this pass never gets off.

He was targeted four times on the first drive hauling in two of those throws include a nice catch away from his body on a ball that was practically by him.  His routes in this game were primarily curl, out, flat and option routes.  His effort on a pass to the flat was nice making a defender miss and then mushing another defender. The touchdown catch was nothing short of fabulous winning a contested catch with strength, concentration and awareness to get his feet down.

His blocking overall is a work in progress.  He doesn’t have the strength to handle guys like Jadeveon Clowney consistently but was solid against the linebackers. His cut block timing was too quick and rendered the block ineffective.  I noticed he is either looking inside or turning his body to watch the snap I assume to help prevent false starts.  When he can’t look inside you’ll see him put his hand on the calf of Zach Gentry so when he moves Freiermuth knows to move.

Great patience here by Harris. The big hole in the middle is filled by the linebacker who is picked up by Green.  Harris finds the second hole from a nice block by Freiermuth to give him a lane to the second level.

Green had a good game overall and was particularly good in the run game and in space. He often plays past the whistle and likes to get that last push in.  He showed better angles on his down blocks, got good push on double team blocks with his guards and shows very good agility on a reach block. I really like his patience on the second level. Many linemen will go full speed and miss the block but he plays under control and slides well laterally.

In the passing game he looked better playing with good pad level and hand placement.  When covered by a defender he showed good play strength and an improved anchor to hold his ground. His awareness and communication with his teammates on twists was good.  The biggest issue I saw was when he was uncovered.  When getting into his set, he would only look one way leading him open to defender beating him on the other side.  He needs to keep his head on a swivel.

In the run game, he is finding his groove.  He is getting excellent push on down blocks, displays very good timing and effectiveness on combo blocks climbing to the second level and he is rather good in space showing mobility to find a block. He has very good agility to get out and lead on sweeps and screens.

In the passing game, the coaching staff showed extreme confidence in him versus Garrett.  There were less than a handful of times where Green was given help from another blocker. Combined with a quick passing game the young lineman did a solid job overall.  Garrett threw a lot at him.  Moore handled the lateral jumps well sliding to mirror the pass rusher as well as a spin move. He struggled versus bull rushes ending up back at the quarterback 5 times and was beaten by a rip twice including a sack. Then again, Garrett does that to just about everyone.

This play features all the offensive rookies including Green blocking 5 yards downfield, Freiermuth sliding to get in the way of Garrett and the patience and reading of blocks by Harris.  The combo block by Moore is especially good. He gets push to the inside before climbing to the second level to swallow up the linebacker.

Loudermilk had some milestones in this game in which he reached double digit snaps for the third time.  He had his first multiple tackle game and was credited with his first sack. He was the closest defender chasing Baker Mayfield out of bounds behind the line of scrimmage.  Probably not how he dreamed it up but I’m sure he’ll take it.

This week he lined up from the one technique to the 4i and he has shown continued improvement from him week to week. His snap quickness is much better since the beginning of the year; his hand usage is good and even tried a spin move rushing the passer.  His motor has been good chasing the ball and he looked good stacking blockers to leverage running lanes. He was on the ground on three of his fifteen plays so he needs to improve on staying on his feet.

Sometimes it’s about doing your job to help the team.  Loudermilk (92) uses good hand placement and flips his hips to the outside to close the B gap and force the play inside to his teammates.  Well played.

Norwood had limited snaps in this game and they were primarily in the slot.  He had a few good reps in man coverage on receivers and tight ends. His one bad rep he got a little flatfooted in his drop and Jarvis Landry was able to create space.  He did get credit for the tackle but it was more of a give himself up move by Landry. His second tackle was one we are seeing often from him making the tackle in Zone coverage short of the first down marker.  His coverage was good overall and I liked his awareness in Zone. His snaps each week will be determined by opponent and game situations so no need to be concerned about his lowest snap count of the season.

We learned some things about Harvin this week.  He has never kicked a field goal or extra point, like, ever.  And he is not a viable option on kickoffs with one out of bounds and one very short kick. However, that is not the reason they drafted him.

He had four punts in this game and three were successful.  The first was short (38 yards) but inside the twenty with no return. The second was a field flipper travelling 56 yards to the opponent’s 21 yard line. The third had good hang time and travelled 44 yards and yielded zero yards on the return. The final punt was troublesome. In a pressure situation late in the game his kick only travelled 33 yards giving the Browns good field position.

His consistency still needs to improve but overall he has handled the punting duties and holder duties well.

Inactive for Week 8 – Buddy Johnson (Round 4)