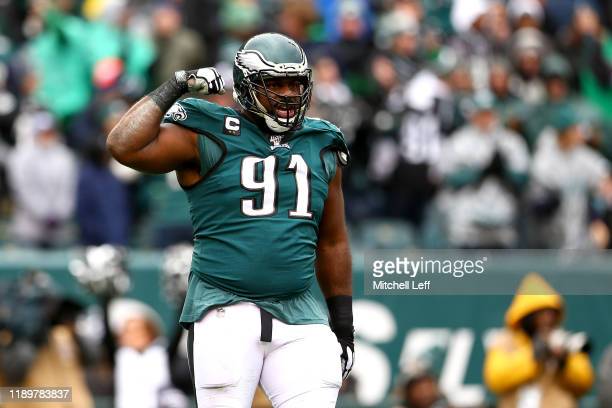 The Pittsburgh Steelers were reportedly interested in adding defensive line help at the trade deadline. And according to this report from CBS’ Jason La Canfora, they took a big swing. La Canfora reports the Steelers were in talks with the Philadelphia Eagles to acquire Pro Bowl DT Fletcher Cox but ultimately, the two sides couldn’t agree on compensation.

“The Eagles were focused primarily on moving players with expiring contracts, sources said, but Cox was brought up in some conversations, with the Steelers showing interest. Pittsburgh has a limited cap situation, but Cox’s recently restructured deal afforded the team the flexibility required to add such a player. However, sources said it would have required at least a third-round pick to pry Cox away, and the Steelers were not willing to do so.”

As La Canfora says and as Dave Bryan pointed out Tuesday, Cox’s contract was structured in a way the Steelers could take it in, though it would’ve created a heavy dead money hit for the Eagles. That’s one reason, along with what he’s meant to the organization, they were looking for a Day 2 pick.

For those curious, it is a LOT more plausible that the Steelers would/could trade for Cox instead Hargrave. Cox has some weird option bonus language/structure past 2021, but on the surface, Eagles more likely to dump him now. But for what? #Steelers https://t.co/2G86uuSbJL

As I tweeted earlier today, the dead money potential related to Cox's contract made it tough for the Eagles to trade him and mainly due to what they needed in compensation to make the eating of dead be worth it for them. #Steelers https://t.co/hSSwPHCaB1

Cox, who turns 31 in December, is a six-time Pro Bower and one-time All-Pro. He’s made the Pro Bowl his last six seasons. He’s seemed to struggle more this year with just one sack in eight starts, but would’ve given Pittsburgh plenty of pass rush juice up front. It’s a bit unclear what role Cox would’ve served with the Steelers, who run a 3-4 as opposed to the Eagles’ 4-3.

But Pittsburgh has been hit hard by injuries across the board along the D-line. Stephon Tuitt has yet to play this season after knee surgery, Tyson Alualu’s season ended with an ankle fracture, and backup Carlos Davis has missed most of the year with a knee injury. He’s currently on IR.

La Canfora’s report indicates the Steelers remain hopeful Tuitt will return this season. But so far into the season, nothing is guaranteed.

Ultimately, the Eagles’ ask was too lofty. Pittsburgh is projected to have multiple compensatory picks for the 2022 NFL Draft, but their draft capital is relatively limited. The Steelers did not trade for a D-linemen at the deadline, now relying on young players like Isaiah Buggs, Isaiahh Loudermilk, and Henry Mondeaux to step up the rest of the way.