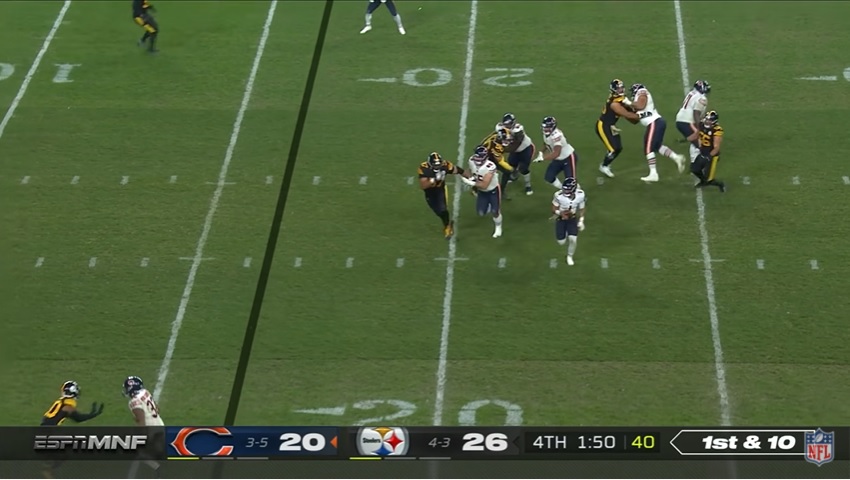 Quarterback contain won’t be a primary concern against Jared Goff and the Detroit Lions but it was an issue in Monday’s win over the Chicago Bears. And considering the mobile QBs left on the schedule – Baker Mayfield, Patrick Mahomes, Lamar Jackson (twice) – it’s something Cam Heyward knows the Steelers’ defense must clean up.

“Just finishing. We weren’t great in the run game, containing the quarterback,” he told reporters via audio provided by the team. “They really got started in the second half with the run game. And then just big plays at the end for them. As a defense, we gotta be better, create more turnovers and more sacks. But to do that, you gotta stop the run.”

Justin Fields broke contain multiple times in Week 9, including on his then go-ahead touchdown to Darnell Mooney late in the fourth quarter. He found a lane and broke to his left, making a strong-armed and accurate throw to the sideline for the score.

That play was far from the only example. Pittsburgh sent only four rushers the majority of the time Monday, in line with what they’ve done this season, making it even more difficult for the rush to contain a mobile QB like Fields.

Beyond his ability to break the pocket, Heyward and other Steelers admitted they weren’t fully prepared for some of the run wrinkles Chicago had. The read-option plays with Fields and Wildcat with RB David Montgomery, returning to action for the first time in a month.

Consider this. On “traditional” running plays, the Bears ran the ball 14 times for 54 yards, an average of 3.9 yards per carry with a 35.7% run success rate (5 of 14). On designed runs by Fields and Wildcat runs, the Bears ran it seven times for 53 yards (7.6 YPC) and a whopping 85.7% run success rate (6 of 7). Pittsburgh clearly struggled to adjust on the fly, and it nearly cost them the game.

The Lions don’t boast a particularly strong running game, though at 0-8, they’ve rarely gotten the chance to establish it. Their biggest offensive threat is the short to intermediate pass game, led by quality options in RB D’Andre Swift and TE T.J. Hockenson. We’ll have a full scouting report on Detroit tomorrow morning.