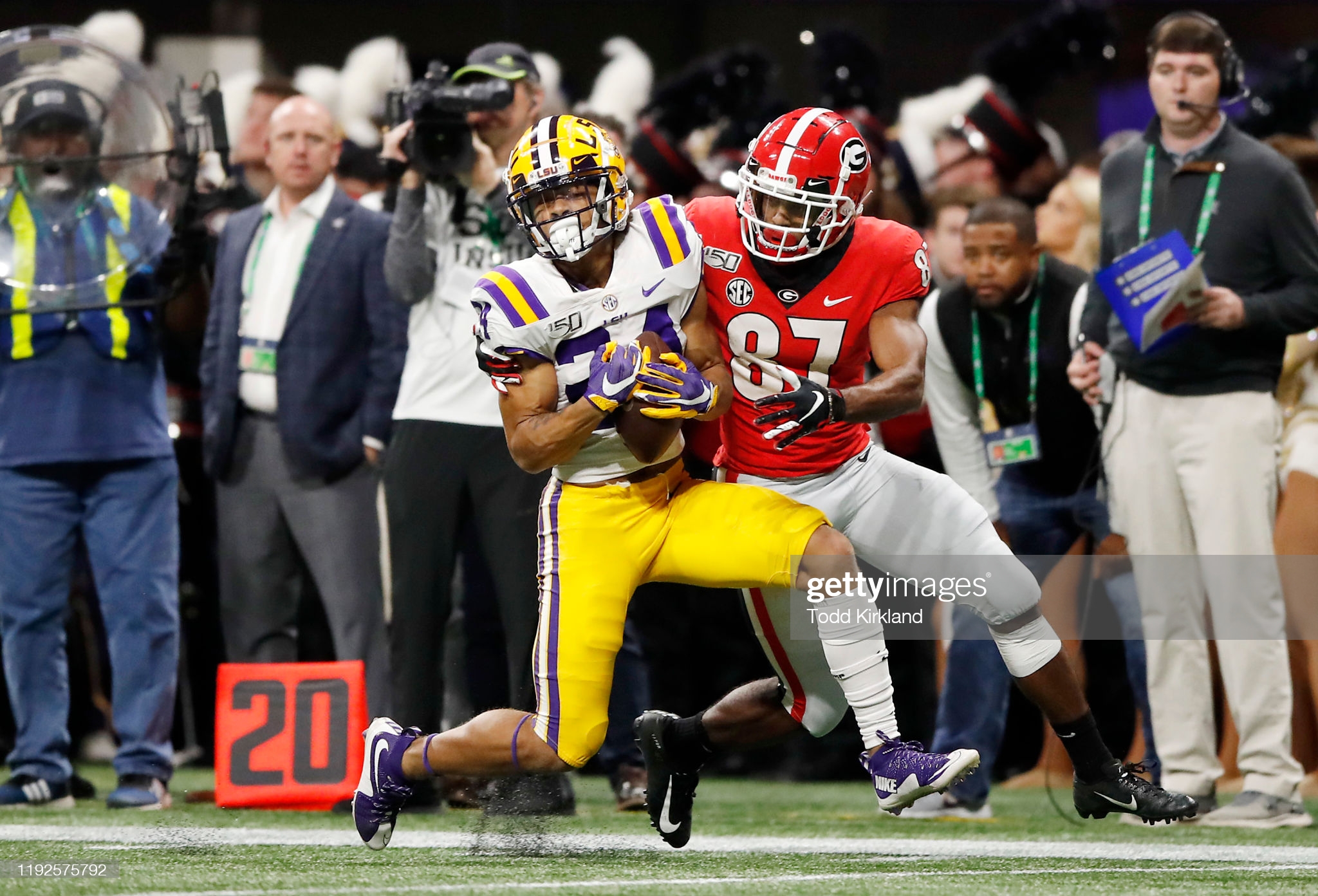 When it comes to potential needs the Pittsburgh Steelers may have after the 2021 season, CB stands out as one of the top positions that may need to be addressed. While Pittsburgh hasn’t had much success evaluating the talent pool in recent drafts at the position, the likely loss of soon-to-be FA Joe Haden along with the status of FA signee Arthur Maulet up in the air after this season leaves a potential hole at CB. Pittsburgh could elect to roll with James Pierre and Cam Sutton on the outside and rookie Tre Norwood become the full-time nickel defender next season but given the talent pool at cornerback in next year’s draft class, this could be the year that Pittsburgh hits on an early-round CB.

So, who could Pittsburgh be looking at in the college game that could potentially make an immediate impact at cornerback next season? I’m glad you asked. Below are just a few names widely recognized in scouting circles as prospects who can transition from the college game and make an impact for an NFL defense.

Stingley Jr. came on campus as a true freshman for the Tigers and had a profound impact in his first season in Death Valley, being recognized as a First Team All-American, First Team All-SEC, and SEC Newcomer of the Year in 2019 after helping the Tigers win the CFP. In his first season, Stingley posted 38 tackles, 21 PBUs, and six INTs. He epitomized the meaning of a shutdown CB, making opposing defenses test teammate Kristian Fulton on the other side who ended up being a second-round selection by the Titans rather than throw his direction. His length, speed, and ball skills are top-notch at the position as he was widely recognized as the top prospect coming out since Jalen Ramsey.

However, things have not fared so well for Stingley since then. He lost three games of the 2020 season due to illness and injuries, making less of an impact on the stats sheet made 27 tackles, including 2.5 for loss and five PBUs. Now in 2021, Stingley has had surgery on his foot, limiting him to only three games played this year before being ruled out indefinitely. In limited action since his breakout freshman season, you have seen flashes of the same talented, physical corner, but there have been moments where Stingley has looked either lost or unmotivated out there, taking bad angles to the football or giving up easy completions and YAC after the catch.

Still projected as a Top-5 selection by many scouting agencies, Stingley’s injury history and recent shaky play could cause him to fall a little in the 2022 NFL Draft. His medicals will have to check out and his football character will have to be vetted to see how much he loves the game, but his talent is undeniable, and a healthy Stingley would be a great Joe Haden replacement in Pittsburgh, providing a potential lockdown corner on the perimeter for the next decade.

If Pittsburgh is looking for a potential Joe Haden replacement after the season, going to his alma mater in Gainesville could prove to be a wise decision. Junior Kaiir Elam played more of a reserve role for the Gators in his first season with C.J. Henderson and Marco Wilson in front of him but gained the national spotlight as a top CB prospect as a sophomore, posting 39 total stops, 11 PBUs, two INTs, and a fumble recovery. He had three INTs as a part-time player in 2019 and has shown the propensity to locate the football in the air and take it away. Standing at 6’2, 196lb, Elam has the length of a prototypical outside CB that can challenge WRs on every play.

Elam has been solid this far in 2021 but has dealt with his own injury woes as he just returned after missing 3 games with a knee sprain. However, his football character is never in question as HC Dan Mullen has praised his dedication and work ethic to get better as a player and get back on the field the help his teammates. For being a cover corner, Elam also brings the physicality you want as a tackler in run support. He is a plus-athlete that has the room to develop into a long-term starter covering the boundary in the NFL. Should Pittsburgh be interested in adding youth and talent to the CB room, Elam checks a lot of boxes as a potential fit.

Ahmad “Sauce” Gardner has what the NFL is looking for: length. The 6’3, 200lb junior is a long, lanky corner with the arms to minimize passing lanes and the long strides to cover ground quickly when needing to recover and not allow receivers to separate from coverage. He made an impact in the Queen City right away as a freshman, notching three picks and eight PBUs, and followed up with another three INTs and six PBUs in 2020. His size and movement skills allow him to blanket receivers in coverage, closing passing lanes and make it difficult for QBs to deliver accurate passes.

His length is a blessing as much as it is a curse for Gardner as he can struggle with quickness at the receiver position as receivers set him up with subtle quick jab steps at the top of their routes to gain separation. However, Gardner has the length and physicality to jam receivers at the line to prevent free releases and has the makeup speed to avoid getting eat deep. His physicality also comes out as a tackler, willing to come up in run support and stick his face in the fan. Gardner by first glance reminds me a lot of William Jackson III who the Steelers had a lot of interest in coming out of Houston. Gardner could be a similar target in 2022.

Obviously, coverage is normally priority #1 when it comes to CBs. However, physicality as a run defender and the ability to pursue the football as a designated blitzer off the edge or playing chase to the running back is an underrated quality in defensive backs. These traits are what made former-Steeler Mike Hilton so valuable to the defense and earned him a nice pay day from the Bengals this offseason. In this draft class, there may be no better CB against the run and at showing pursuit than Washington’s Trent McDuffie. McDuffie only has two INTs to his name in three seasons, but the 5’11, 195lb redshirt sophomore is a blur when chasing the football, showing phenomenal pursuit and can lay quite the hits.

Along with being a sound defender that sniffs out screens and short passes near the LOS, McDuffie makes great plays on the ball and plays well in zone and off-man coverage. He may be considered undersized but has done well when matched up with receivers in the slot as well as on the outside. If Pittsburgh is looking for a potential Hilton replacement this offseason or wants a feisty competitor who flies to the football on every snap, McDuffie is the player Pittsburgh should have on their radar.

McCreary doesn’t garner the same national media attention that fellow SEC CBs Stingley or Elam have, but don’t let that fool you into thinking that he isn’t capable at playing at the same level. The 6’0, 190lb senior was a stellar track athlete in high school and that speed and explosiveness pops on film. He is a twitched-up athlete that is capable running with the best in the SEC in man coverage and has the ball skills and awareness to challenge the catch point when the ball is in the air. All you have to do is go back to his battle in 2019 with current Cincinnati Bengals WR Ja’Marr Chase and see the back-and-forth battle between he and McCreary to know he can play.

He has moments where he can be out of position or may get baited on the double move, but McCreary has the lateral movement skills to react to quick hitters and releases by opposing receivers to be in position to play the ball and force the incompletion or create a turnover. GM Kevin Colbert has a love affair with SPARKy athletes that have the experience and college production to match. McCreary fits the bill having six INTs during his time with the Tigers along with 24 PBUs and can be a potential target as a value with other prospects potentially pushing him down the board that Pittsburgh could capitalize on next spring.

What are your thoughts on the current state of the Pittsburgh Steelers cornerback room? Do you think Joe Haden will be back in 2022, or that Pittsburgh will let him walk and they will look to add new blood in the secondary? What do you think of the names provided and their potential impact in Pittsburgh? Please leave your thoughts in the comments section below and thanks again for reading!