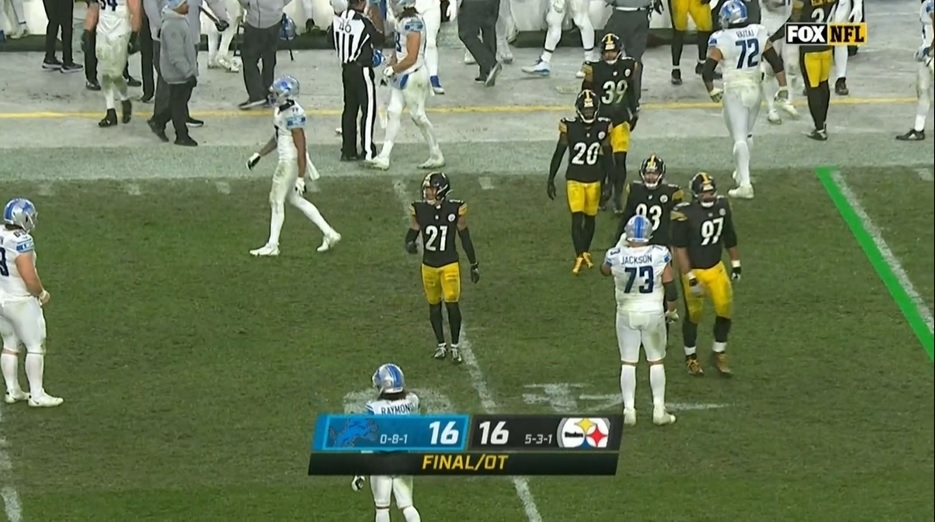 Whatever *that* was, it was terrible.

Somehow, the Pittsburgh Steelers and Detroit Lions played to a sloppy 16-16 tie at Heinz Field in rainy, cold conditions, dropping the Steelers to 5-3-1 on the season.

Without Ben Roethlisberger on the field due to a positive COVID-19 test Saturday night, the Steelers’ offense struggled after the first drive to truly do much of anything at a passable level, resulting in the defense needing to carry a heavy load. That heavy load led to the Lions gashing the Steelers’ defense on a day in which the defense did a very poor job tackling early on, allowing the Lions to take a halftime lead and hang on for the tie.

Once again, the Steelers were rather sloppy throughout the game in which they faced a far less inferior team, which has become par for the course in the Mike Tomlin era.

Let’s get to some painful grades.

Forced into action due to Roethlisberger’s positive test, Mason Rudolph was about as expected guiding the Steelers’ offense Sunday at Heinz Field against the Lions, completing 30-of-50 passes for 242 yards, one touchdown and one interception.

Rudolph started the game on fire, leading the Steelers right down the field for an opening-drive touchdown, hitting former college teammate James Washington for a score in the back corner of the end zone.

After that though, it was really hit or miss for the fourth-year quarterback. He forced a lot of 50/50 balls downfield, had a woeful interception on a late throw to running back Kalen Ballage out of the backfield on third and long, and misfired on two layups to Diontae Johnson late in the game and to Ray-Ray McCloud at the goal line.

He left a lot of throws on the field overall, but dropped a beautiful dime to Johnson into the bucket in overtime before Johnson fumbled it away, and also did a nice job moving the Steelers down the field late before Pat Freiermuth’s fumble to effectively end the game.

He didn’t win the Steelers the game, and he didn’t lose it. He was an effective game manager overall. But the Steelers needed just a bit more from him and he couldn’t deliver.

Harris added four catches for 28 yards and was a real workhorse on the day, helping move the chains and providing balance to the offense on a day in which the Steelers attempted 50 passes.

The rookie is really starting to find his game overall and is creating missed tackles at a high level. He’s not going to have the explosive runs, much like Le’Veon Bell, but I’ll take a bunch of 10+ yard runs week after week.

Benny Snell Jr. and Kalen Ballage got some run in the tie as well. Neither did anything of note as Snell rushed one time for four yards and Ballage was targeted twice, one of which went for an interception.

The wide receiver room certainly started fast with Ray-Ray McCloud’s big third-down catch and James Washington’s touchdown catch. After that though, the wide receivers were relatively hit or miss.

McCloud finished with a career high nine catches for 63 yards and was strangely a big part of the offense. I will never understand the belief in McCloud at this point, yet here we are.

Johnson had a strong game overall, finishing with seven catches for 83 yards, but his fumble in overtime was incredibly costly as it likely would have been a drive that ended in a game-winning Chris Boswell field goal. Johnson did have at least one drop too, but that will happen in conditions like that in which the Steelers and Lions squared off in.

While Washington did start the game fast, the forcing of the football to him from Rudolph was rather concerning, especially on deep balls. His offensive pass interference wiped out a big play late as well.

It was a rough game overall for the Pat Freiermuth, who had his first real hiccup as a rookie. The first-year tight end had a big drop late in the game and then fumbled the football away with 15 seconds left in overtime, allowing the Lions to recover the ball and ultimately hold on for the tie.

Eric Ebron made a tough early catch over the middle but then after that was mostly invisible, aside from his stupid hurdle attempt late in the game in which the situation simply didn’t call for it. That’s Ebron to a T though.

Not much to write home from the tight ends overall though, aside from the drop and the fumble.

For the first time in quite some time, the Steelers’ offensive line didn’t allow a single sack or a single quarterback hit on Sunday, keeping Mason Rudolph upright throughout the game, which allowed him time to throw the football throughout the game.

The offensive line also did a really nice job opening rushing lanes for Harris on the day, helping him put together his second career 100-yard game.

That said, Kendrick Green really struggled to snap the football in wet conditions, leading to a number of high snaps — including a back-breaking one in overtime that cost the Steelers greatly.

Rookie Dan Moore Jr. also had a holding call that wiped out a Harris rushing touchdown, that — while it was very questionable — was game-changing. Kevin Dotson and Trai Turner both excited the game with injuries, forcing Joe Haeg and JC Hassenauer into the game. The two played relatively well in place of the two starters.

It wasn’t a bad game by any stretch, but there were key moments that really hurt the group overall.

Without Cameron Heyward, this defensive line group would be dead in the water.

Heyward was a man on a mission on Sunday, recording five tackles, two sacks and two quarterback hits, single-handedly trying to will the Steelers to a win. Outside of Heyward, the defensive line group was mostly awful on Sunday. Isaiah Buggs had a few flashes against the Lions, but he was super inconsistent against the run, while Chris Wormley was mostly invisible on the day despite recording three tackles.

The defensive line is pushed around far too easily against the run. Teams are starting to see that on tape, so expect more of the same in the coming weeks.

This group needs to find some health in a hurry because it’s a mess aside from Heyward.

This was, by far, the worst game of Devin Bush’s career, and it was a multitude of things that played into that, including poor effort, the inability to quickly diagnose plays, failure to get off blocks and a woeful tackling performance. He’s trending in a dangerous direction for a first-round pick and needs to get it figured out in a hurry.

His holding call on T.J. Hockenson in overtime negated a Minkah Fitzpatrick interception as well.

Along with Bush, I though Joe Schobert — despite a team-high 11 tackles – was rather rough on the day as well. He didn’t have any misses from what I saw live, but he was pushed around against the run, slow to get off blocks and overflowed too much, leaving cutback lanes.

The inside linebackers were absolutely dreadful on the day, full stop.

Outside, it was a bit better, but still nothing great.

T.J. Watt, prior to leaving the game with an injury, wasn’t able to make much of an impact as the Lions ran the ball at will and doubled the All-Pro. Watt was able to make his way to Jared Goff for a sack, but was injured in the process.

Opposite Watt, Alex Highsmith had a decent game, recording a career-high 11 tackles. He flashed at times against the run, but there were too many times he lost containment and it led to big plays for the Lions. He’s struggling with consistency at forcing runs back inside. Taco Charlton was mostly invisible as well, recording three tackles but had a rough go of things against the run — much like the rest of the front seven.

Somehow, despite the Lions throwing for just 114 yards, the Steelers plays to a tie.

Aside from Joe Haden leaving the game early with an injury, the Steelers’ second overall was solid. Cameron Sutton had a decent day on the boundary in coverage, though he did have a missed tackle on Swift in the run game. Tre Norwood had a really strong game, outside of his bogus roughing the passer penalty. He had two key third down pass breakups and should have had an interception.

James Pierre played really well, recording seven tackles and was a force coming downhill to make plays against the run and quick screens. He’s starting to come into his own.

At safety, Terrell Edmunds had a whale of a game. He made multiple key plays in space and recorded a key sack in overtime, serving as one of the best defensive players on the field on the day. He deserves more respect at this point in his career, regardless of the lack of turnovers. He’s just a really solid box defender.

Minkah Fitzpatrick though…he was dreadful in this one. Fitzpatrick was really poor in run support, took very poor angles and the effort tackling wasn’t there at times, leading to misses. The interception would have wiped that all out, but alas, Bush was called for holding.

I though Miles Killebrew played well in key packages as the Lions continued to pound the football. He brought some physicality to the defense and filled run lanes well.

Another week, another really rough performance from Danny Smith’s charges.

Kick coverage was really poor as Godwin Igwebuike recorded a 30-yard return, and punt coverage was a mess as well as Khalif Raymond recorded a 48-yard punt return and finished with 73 punt return yards on the night. Add in the penalties on special teams and it was just a very rough day.

I will say though: I was pleased overall with the kicking game on a day in which conditions were less than ideal. Chris Boswell was 3-for-3 on the day, including a terrific 51-yarder in the rain, and punter Pressley Harvin out-punted one of the best in the game in Detroit’s Jack Fox, averaging nearly 47 yards per punt on the day, dropping three punts inside the 20 on six total punts.