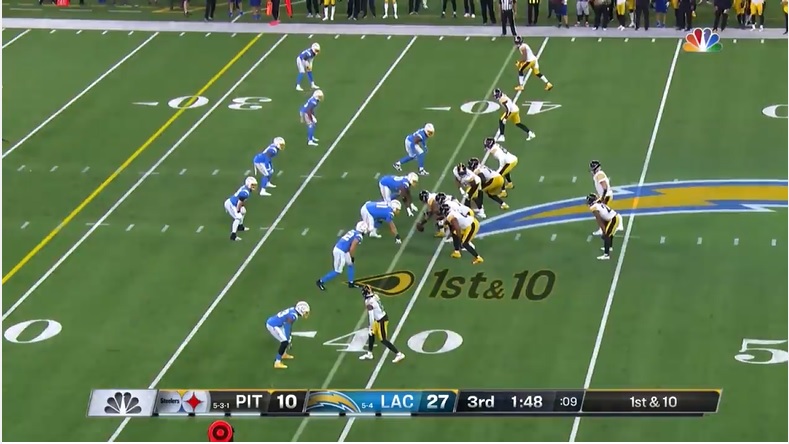 Well, that one sure escalated quickly.

Though the Pittsburgh Steelers ultimately went out with a whimper, it was a phenomenal effort on the road, coming back from multiple two-score deficits to make it a game and ultimately have the football in Ben Roethlisberger’s hands with a chance to go and win the game on the road Sunday night against the Los Angeles Chargers.

In the end though, the Steelers simply weren’t able to overcome injuries on both sides of the football that left the black and gold depleted, dropping a thrilling 41-37 decision to the Chargers at Sofi Stadium.

Roethlisberger turned the clock back after missing all week due to COVID protocols, special teams came up with another huge punt block and Cameron Heyward looked like a true Defensive Player of the Year candidate.

A loss stings though, as the Steelers fall to 5-4-1 on the season.

For a guy who didn’t practice all week and dealt with COVID-19 symptoms, Roethlisberger sure looked pretty darn good on Sunday in the bright lights of Los Angeles. Fresh off the COVID list, Roethlisberger finished 28-of-44 for 273 yards and three touchdowns, leading the Steelers back from multiple two-touchdown deficits before the Steelers ultimately came up short.

With a full week off from practice, Roethlisberger looked refreshed, showing off a strong arm, great ball placement and overall good decision making. He seems to be at his best when he has some time off and has to jump into action without any practice.

Roethlisberger really threw the football well, avoided the killer turnover and turned in a vintage performance on the road with the Steelers’ backs against the wall.

While the offensive line really struggled to create any sort of traction on the ground on Sunday night, I thought rookie Najee Harris had his worst performance as a Steeler. He missed a couple of holes, failed to create many missed tackles, and generally looked like he was dealing with some sort of ailment in space as he wasn’t getting up the field and appeared to be running in sand.

It was very puzzling to see from him, and then he took a very dirty shot from Chargers’ linebacker Kyzir White late in the game, putting him into concussion protocol before returning for the final drive.

Harris did score a touchdown in the loss, but he had just 59 total yards of offense on 17 touches, which is way below his standard at this point in his rookie season, especially against one of the league’s worst rushing defenses.

Behind Harris, Benny Snell and Kalen Ballage touched the ball a combined three times for 10 yards, which just won’t cut it on a night in which the Steelers needed some sort of change of pace back behind the rookie and couldn’t do much of anything offensively from the position.

Diontae Johnson continues to look like a true No. 1 wide receiver this season, and it’s a huge testament to the work he’s put in over the last year or so. Johnson continued his impressive 2021 season on Sunday night, hauling in seven passes for 101 yards and a touchdown, making a spectacular catch on his touchdown and adding another jaw-dropping catch down the right sideline in the loss.

He’s added great hands to his already superb route running, which makes him a deadly combination.

Behind Johnson, Chase Claypool had a decent game in his return from a foot injury, hauling in five passes for 93 yards, including a 37-yard catch that was a bit under thrown from Roethlisberger and should have gone for a touchdown before the Steelers’ drive ultimately fizzled out.

James Washington and Ray-Ray McCloud finished with two catches for 12 yards each as both served their purposes behind Johnson and Claypool, though it continues to show that the Steelers lack considerable depth behind the top two guys.

Just a really strong showing by the receivers overall, specifically Johnson who needs to gain more attention from the national media at this point.

Both Pat Freiermuth and Eric Ebron caught touchdowns on the night, but aside from the two scores inside the 10 yard line, the tight end position was rather quiet throughout the game.

Freiermuth was targeted seven times but finished with just four catches for 11 yards, scoring on a 5-yard screen pass from Roethlisberger, while Ebron’s touchdown was also from 5 yards out before he ultimately missed the rest of the game with a knee injury suffered on the score.

The veteran finished with his best performance in weeks, hauling in three passes for 24 yards and the score, but the tight ends really just didn’t do much on the night as the Chargers did a good job overall taking away anything the Steelers tried to do in the passing game to Freiermuth until Ebron made some plays on the Steelers’ scoring drive in the middle of the fourth quarter.

This grade might sound harsh, but I thought the offensive line overall had a really rough night. There were certainly flashes of strong play at times, including the display of athleticism in space on Freiermuth’s touchdown by Chukwuma Okorafor and Kendrick Green getting out in front of the rookie tight end and displacing defensive backs to allow for the walk-in touchdown.

Aside from that though it was a rough night.

Green continues to struggle mightily when guys are over top of him. He rushes the snap and then can’t get his feet or his hands set and gets pushed around. Multiple times on Sunday night he was walked into the lap of Roethlisberger or into the rushing lane of Harris, blowing up the play from the start. He has to be better.

Okorafor was solid overall against a good Chargers’ pass rush, but rookie Dan Moore Jr. struggled again, allowing a lot of pressure to Joey Bosa and Uchenna Nwosu on the night. He did a good job overall handling some twists and passing them off, but the Chargers attacked him consistently and ultimately made the Steelers pay for it.

Trai Turner was fine overall, not much positive or negative to right home about, but Joe Haeg had as ugly of a close to a game as you’ll find. Haeg had to come in at left guard for JC Hassenauer, who was forced from the game early with a pectoral injury, which is never a good sign. Haeg allowed sacks on back-to-back snaps with the Steelers down four and an opportunity to go on yet another game-winning drive by Roethlisberger.

This group also really struggled to do anything of sorts on the ground against arguably the worst run defense in football. That’s as puzzling as it gets, considering how well this group has been on the ground in recent weeks.

Without Cameron Heyward this Steelers’ defense would be in trouble.

The defensive captain didn’t stuff the scoresheet on Sunday night, but he was spectacular overall, batting a pass that resulted in an interception for Cameron Sutton, chased down Chargers’ quarterback Justin Herbert 40 yards downfield and saved a touchdown, and generally ate up blockers and drew a ton of attention from the Chargers.

The problem along the defensive line though is that nobody else could step up Sunday night.

Chris Wormley didn’t make much of an impact and somehow finished with four tackles, while practice squad call-up Daniel Archibong added two tackles. Isaiah Buggs had a batted pass at the line of scrimmage that was his only real impact on the game. If he doesn’t bat that pass Sutton probably picks that one off. That’s tough.

The inside linebacker duo of Devin Bush and Joe Schobert is really struggling right now. Yes, Schobert made a great play on a fourth-down stop late in the game forcing a turnover on downs, but Schobert and Bush are having a hard time getting off blocks and flowing to the football against the run as the Steelers watched Austin Ekeler rush for two touchdowns.

Aside from run game struggles, Bush looks absolutely lost in coverage at times and just isn’t giving the Steelers much of anything against running backs out of the backfield. That’s a tough task overall regardless of what linebacker is out there, but Bush has to be at least a bit better there.

Outside, with T.J. Watt I thought Alex Highsmith was fantastic, recording 1.5 sacks and really setting the edge against the run. He showed just how good he is as the solo star outside and really gave the Steelers great reps.

Taco Charlton recorded half a sack in his first start with the Steelers, while Derrek Tuszka added a tackle in relief. The lack of a consistent pass rush and run defense without Watt was really noticeable and showed just how important he is to the Steelers. Charlton and Tuszka were hit or miss setting the edge against the run, and aside from the half a sack there was just no pass rush juice from those two.

Sutton showed up and played arguably the best game of his career, but it wasn’t enough in the end. The veteran corner led the way with 10 tackles, a tackle for loss and an interception, but outside of him nobody truly made any plays in the secondary.

Rookie Tre Norwood held his own in place of Minkah Fitzpatrick, but he was unable to cover up a lot of the issues that Fitzpatrick has this season, which played a role in the Chargers so easily moving the football on Sunday night. Terrell Edmunds had a below average game against the run and in coverage and added a couple of missed tackles in the process, as did James Pierre, who teamed up with Edmunds to have one of the uglier reps I’ve seen from this defense on Ekeler’s second touchdown catch.

Pierre was also hit with a pass interference penalty in the end zone and just had a rough game overall.

Akhello Witherspoon got a lot of run with Joe Haden sidelined and he was as expected: bad. He was burned consistently by Mike Williams and Keenan Allen and is just a liability out there. Sure wish the Steelers had that fifth-round pick back.

Karl Joseph had a key pass breakup late in the first half but also had a holding call on the same drive. He looked good overall in the box and probably should have gotten more run.

Overall though, this group simply couldn’t cover Allen and Williams, and was exposed on the Chargers’ 53-yard touchdown to take the late lead when Williams was wide open with nobody around after a corner blitz.

Needing a big play on special teams, Smith dialed up another punt block and this time it was Miles Killebrew again who shot in and blocked the Chargers’ punt, setting up a Steelers score.

Special teams was really good overall as Chris Boswell was 3-for-3 on field goals and 4-for-4 on extra points, while Pressley Harvin III had a 46-yard punt on his lone attempt of the night.

I was most impressed with the kick coverage on the night against former All-Pro returner Andre Roberts. The Steelers held him to just 22.5 yards per return on Sunday, and caused him to record a loss of one on his lone punt return. On the other side, Ray-Ray McCloud was pretty good returning the football after struggling in recent weeks.