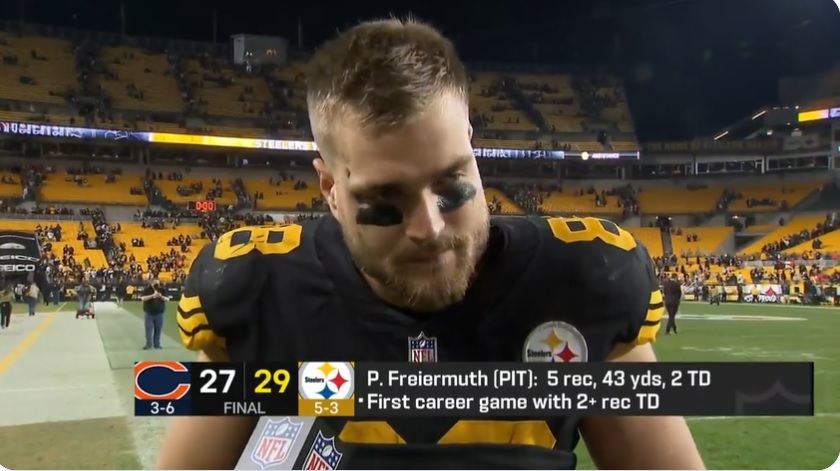 Pat Freiermuth has played well all season. And from the moment he got on scene, he’s caught virtually every ball thrown his way. But perhaps his extra impressive two-touchdown showing in Monday night’s win over Chicago had something to do with the man he’s compared to, Heath Miller, being in attendance.

Freiermuth got to meet Miller for the first time tonight, Ryan Recker tweeting out this video of the two talking before the game.

Freiermuth had a Miller-like performance, catching five passes on six targets with two red zone touchdowns in the win. After the game, Freiermuth told NFL Network’s Aditi Kinkhabwala what Miller told him prior to kickoff.

“He just said play my game,” he told Kinkhabwala afterwards. “That I’m killing it so far. I’m going to have to use him as a resource and continue with this long season. It’s a grind. He said to continue [taking care of] your body and stuff like that. And keep making plays. It’s great to finally meet him.”

Right after this nutty #MNF finish, #Steelers rookie @pat_fry5 talks crazy endings, key plays and maybe being THE tight end this team has searched for since Heath Miller retired. pic.twitter.com/qUZQDOKyDl

If you didn’t know what year it was, you would’ve thought Freiermuth was Miller. The blocking in space on the perimeter, opening up lanes for receiver jet runs. The tough, combat catches in the red zone. Making clutch plays on the game-winning drive, a diving 13-yard grab to help set up Chris Boswell’s 40-yard field goal.

In fact, Freiermuth and Miller are the last two rookie Steeler tight ends with two-plus touchdowns in one game. Each performance came at home on a Monday night. Freiermuth against the Bears in a two-point win, Miller against the Ravens in a one-point win.

Freiermuth has become an important asset in the Steelers’ offense, especially following JuJu Smith-Schuster’s season-ending shoulder surgery. He’s quickly earned Ben Roethlisberger’s trust, rightfully so, with big play after big play. He isn’t a dynamic weapon of a tight end like the elite players at the position, but he’s sure-handed and showing quickness after the catch with good feet and ability to transition upfield.

While comparisons to a player as good as Miller are a lofty goal, Freiermuth is making it a valid one. Pittsburgh is well on their way to having a ten-year starter, just as they did with Miller.