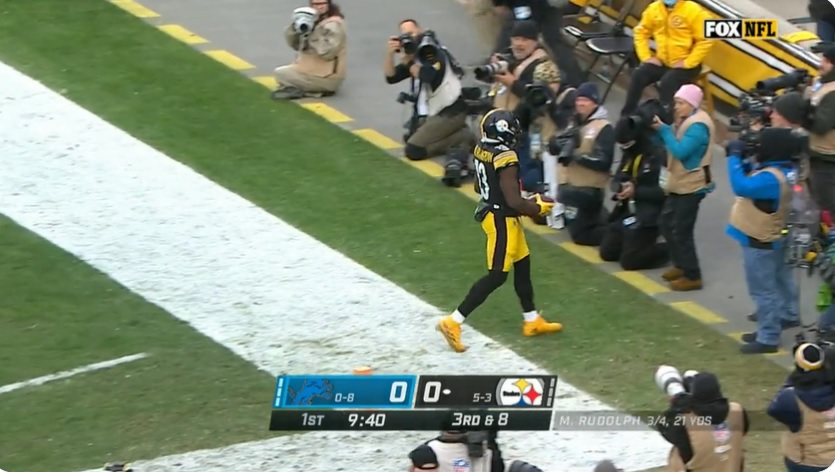 In a game that can only be described as ugly, the Pittsburgh Steelers and Detroit Lions tied at 16, with the Steelers missing Ben Roethlisberger, who entered COVID-19 protocol on Saturday night.

The Steelers scored a touchdown on their opening drive as QB Mason Rudolph targeted his old college WR James Washington, and Washington came away with a nine-yard touchdown reception. K Chris Boswell’s extra point put the Steelers up 7-0. Washington was also targeted on a deep ball down the left sideline that was called for defensive pass interference and gained the Steelers 29 yards on third and three from their own 49.

FB Derek Watt made his presence felt on special teams, as he stopped Lions RB Godwin Igwebuike at the Detroit 16. A false start penalty against Detroit set them back another five yards, and Detroit didn’t pick up a first down on the drive. The Steelers had great opening field position on their next drive at their own 40, but the Steelers couldn’t capitalize, going three and out after a reverse to WR Ray-Ray McCloud lost three yards on second down and Rudolph missed WR Diontae Johnson on third down.

The Steelers forced another Detroit three and out after S Terrell Edmunds made a big stop on RB D’Andre Swift for a loss of three on second down and OLB Alex Highsmith and ILB Joe Schobert combined to stop Swift short of the line to gain on third down.

The Steelers moved into Detroit territory at their 45, but Rudolph missed RB Kalen Ballage on third down and was picked off by LB Julian Okwara. The Lions couldn’t take advantage, once again going three and out. The Steelers responded with a three and out of their own, and their punt coverage got burned. Pressley Harvin booted one 61 yards, but Kalif Raymond took it back 48 yards to the Pittsburgh 39. The Lions picked up their first first down of the game on a four-yard run by Jermar Jefferson, and on the next play he ran for 28 yards and a touchdown. Ryan Santoso’s extra point was good, and the Lions tied the game at 7.

The Steelers put together a solid drive, but RB Najee Harris’ would-be touchdown was taken off the board by a holding penalty against Dan Moore Jr. The Steelers ultimately settled for a 20-yard Boswell field goal to take a 10-7 lead after a 13-play, 73-yard drive that took over eight minutes off the clock.

Pittsburgh’s run defense got gashed on the next Lions drive, as Swift ran for 61 yards and set up the Lions to tie the game up at 10-10 going into the half. The Lions took the opening kickoff to the Detroit 44, but a holding call brought them back to their 15. Swift ran for 16 yards on first down, and then on third and nine ran for another 12 yards and a first down. Then, Jefferson ran for another 14 yards to give Detroit a whopping 157 rushing yards with over minutes left in the third quarter. It didn’t end there, as Igwebuike ran for 42 yards and a touchdown. The Lions missed the extra point and took a 16-10 lead.

The Lions moved into Steelers territory when WR Amon-Ra St. Brown turned a third-down screen pass into 19 yards and a first down. On third and five in Pittsburgh territory, the Steelers defense made a stop, stopping WR Kalif Raymond for no gain on a screen. The Lions offense stayed on the field but were unsuccessful in trying to draw the Steelers offsides, and Jack Fox’s punt was touched in the endzone for a touchback.

Ray-Ray McCloud had his eighth reception of the game on third and nine, picking up 14 yards. On third and four from their own 41, Rudolph was incomplete down the left sideline to Washington. Harvin’s punt went 46 yards to the Detroit 13, and it was returned by Raymond for a gain of five. Swift ran for a yard on first down, but OLB T.J. Watt sacked QB Jared Goff on second down. However, Watt went down after the play with a hip injury and did not return.

The Steelers did force a stop and their offense got the ball back at the 50 yard line. On third and five Rudolph was incomplete to Washington, Washington got flagged for offensive pass interference, and the Steelers were knocked out of field goal range at their own 43. Harris got the ten yards back on a catch and run on third and 15, and Boswell came out to tie the game. His 51-yarder through the rain was good and the score was tied up at 16 apiece.

Rudolph missed a wide open Diontae Johnson on third and three from the Pittsburgh 48, and Harvin’s punt pinned the Lions inside their 20 at their 13. The Lions went three and out, and the Steelers had a huge third-down sack to pin Detroit at their 2. The offense took over at the Detroit 48 with 3:22 to play. On first down, Rudolph again missed Johnson, and Harris picked up three on second down. Rudolph was incomplete on third down, and the Steelers failed to capitalize on their good field position and had to punt it away. Harvin punted into the end zone for a touchback. The Lions picked up a first down after a Kalif Raymond reception on second down, and then another on a Swift reception. On third and ten from the Detroit 45 with 35 seconds left, Goff missed going to Trinity Benson.

After McCloud’s 10-yard return, the Steelers took over with 19 seconds left on their own 22 and chose to kneel out for overtime. The Lions got the ball to open overtime. On the first play, Goff hit St. Brown for a 30-yard gain, and the Lions were immediately in Steelers territory at the Pittsburgh 44. Two runs by Swift only netted three yards, and on third and seven, Goff was sacked by DE Cam Heyward. Fox’s punt was downed at the Pittsburgh 17. On second and eight, Diontae Johnson picked up 39 yards, but was stripped by former Steelers’ CB Mark Gilbert at the Detroit 42. The Lions recovered at their own 45.

What would’ve been an interception by S Minkah Fitzpatrick was taken off the board due to defensive holding by Devin Bush (who really struggled all game), and the Lions got another shot. A roughing the passer call against Tre Norwood gave the Lions the ball at the Pittsburgh 34. On third and four, St. Brown was short of the first, but the Lions were flagged for a hold. On third and 14 from the Pittsburgh 38, Goff completed a pass to Kalif Raymond for eight yards.

Ryan Santoso came out for a 48-yard field goal to win, but it was no good. With a chance to win the game, the Steelers fumbled a second-down snap and were incomplete on third down. The Steelers punted it back to the Lions, and on first down Goff was sacked by Edmunds. The Lions failed to pick up a first down, and the Steelers got the ball back. An eight-yard completion to TE Pat Freiermuth got a first down at the Pittsburgh 35, and back-to-back completions to TE Eric Ebron and RB Najee Harris put the Steelers in plus territory at the Lions’ 49. A ten-yard completion to Johnson put Pittsburgh on the cusp of field goal range, but Freiermuth fumbled on the next play and the Lions recovered. The Lions tried to run a hook and ladder, but the game ended in a 16-16 tie.

The Steelers will look to pick up a win next Sunday night when they travel to SoFi Stadium for a primetime matchup against the Los Angeles Chargers.