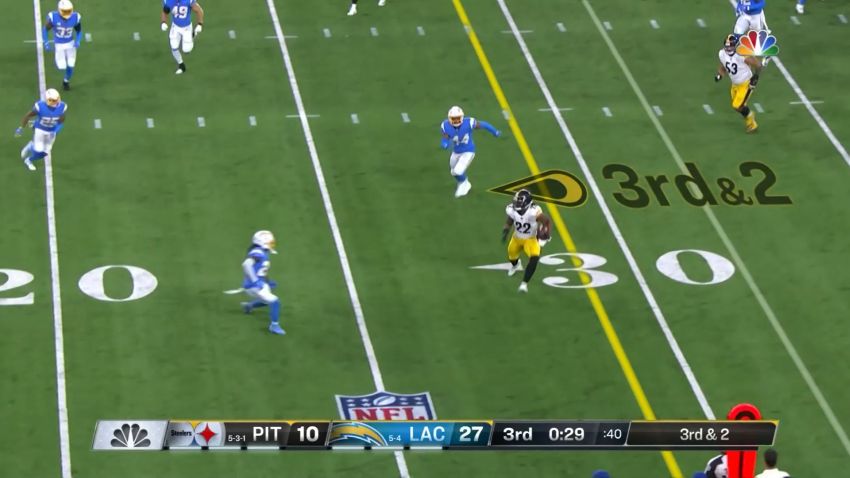 You knew the Pittsburgh Steelers were going to lean heavily on running back Najee Harris as soon as they drafted him in the first round back in April. Head coach Mike Tomlin, who loves his bell cow backs, has held true to that. The rookie already has 220 touches in nine games, averaging 24.4 per game.

He had 963 yards from scrimmage entering tonight’s game against the Los Angeles Chargers. He’s crossed the 1,000-yard threshold now, becoming the first player in Steelers history to record 1,000 yards from scrimmage in his first 10 career games. In doing so, he became just the 30th player since at least 1950 to achieve that feat, most recently done by 2020 Jacksonville Jaguars rookie running back James Robinson.

With that six-yard reception, @ohthatsNajee22 became the first rookie in @steelers history with at least 1,000 yards from scrimmage in his first 10 career games…#BertschyBits#HereWeGo#PITvsLAC

Other recent members of the club include the Raiders’ Josh Jacobs, the Giants’ Saquon Barkley, Kareem Hunt while he was with the Chiefs, Leonard Fournette while with the Jaguars, and Ezekiel Elliott of the Cowboys. The last non-running back to hit the mark was Odell Beckham Jr. as a Giant in 2012, in fact the only non-running back to do it.

Even on the road, the table was set for success tonight. The Chargers came into tonight’s game with the last-ranked rushing offense, and while they got Joey Bosa back from the Reserve/COVID-19 List at the last moment, they have been without two key linemen in Linval Joseph and Jerry Tillery.

The sledding wasn’t easy to begin with, though. Two of his first three carries went for just a yard or two, with a four-yard carry on 2nd and 9 sandwiched in between. Benny Snell, in fact, checked in for a couple of touches before Harris even had one successful run to his name. And he frankly narrowly avoided what looked like a potential serious knee injury fighting for extra yardage on a very short pass.

It wasn’t until late at the end of the first quarter that he had his first successful touch, on the Steelers’ second drive, going for six yards on a 1st and 5 play. He followed that up with a pitch sweep for another four, yet he finished the quarter with just 18 yards.

He finally hit 37-plus yards for the game in the second half after finishing the first half with…36. He had his best plays near the two-minute warning, a 12-yard carry on 1st and 10 and a five-yard gain on the first play after the warning, putting him at exactly 36 yards from scrimmage for the game: 35 rushing and one receiving.

While Harris isn’t quite in Erick Dickerson territory—Dickerson recorded 1,540 yards from scrimmage during his first 10 games back in 1983—the rookie out of Alabama has been essential to the Steelers’ success this season, particularly during their recent 4-0-1 run, which has seen his workload accelerate.