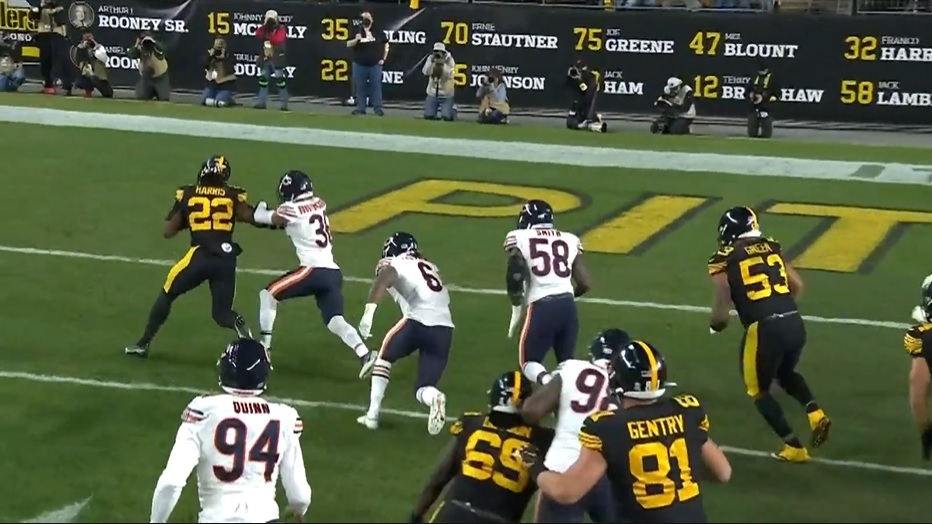 Another week, another terrific tackling performance by the Pittsburgh Steelers’ defense on Monday night at Heinz Field in front of a primetime audience.

After bouncing back in a big way in Week 8 against the Cleveland Browns, the Steelers picked up right where they left off in that department, doing a great job of rallying to the football, containing rookie quarterback Justin Fields in the pocket and wrapping up upon arrival at the ball carrier.

That alone went a long, long way towards the win, moving to 5-3 on the season.

Despite the late comeback that the Steelers’ defense allowed on Monday night to the Bears, the defense overall did an excellent job tackling in the win, missing just four tackles overall, while the kick coverage unit on special teams came through with the two other misses, making for an overall fanstatic day for the Steelers.

One thing to note though: Three of the six misses on the night were the first misses of the year for rookie defensive lineman Isaiahh Loudermilk, special teams ace Derek Watt, and defensive captain Cameron Heyward.

Let’s take a look at some of the misses.

Heyward records his first miss of the season on an early scramble from Fields, just missing the rookie quarterback in space.

It’s certainly a tough play for Heyward to try and make against the mobile quarterback, but it’s one that he’s made time and time again in his career. He gets his hands on the rookie quarterback’s shoulder, but just can’t get close enough to get those big bear paws around Fields enough to control him and wrestle him to the ground.

Fields then struck again, forcing a Steelers’ defensive tackle to miss in space one play later.

Chris Wormley does a fantastic job beating Bears’ right guard James Daniels inside to get a lane on Fields.

He just doesn’t bring his feet with him, instead trying to go for the arm tackle against Fields, who is strong enough to slip out of the sack attempt. Fortunately for Wormley, T.J. Watt is in the vicinity to clean up the miss and get Fields on the ground for the first of his three sacks on the night.

Finally, early in the fourth quarter rookie Tre Norwood — who has had a great rookie season overall — comes up with a miss on special teams.

Kick coverage was really good all night long against Chicago’s Jakeem Grant, who is one of the top return men in football at the moment. Norwood does a great job of staying in his lane and closing down on Grant, but he dives late in the rep, just nicking Grant’s legs for the miss.

However, that miss may have done just enough to get Grant off-balance, leading to his fumble shortly thereafter on a hit from James Pierre, leading to a fumble recovery by Chris Boswell.

Offensively, the Steelers had a tremendous night in the forced missed tackle department, once again led by standout rookie Najee Harris.

Right away on Monday night, Harris was a force, causing two Bears to miss on his 10-yard touchdown run to open the scoring.

He’s just so smooth. The blocking was tremendous on the play, but Harris had to do just a bit to get into the end zone. Time and time again, he’s able to.

Later on in the game, Harris forced Bears’ standout linebacker Roquan Smith and struggling cornerback Kindle Vildor to miss on a short checkdown to the right side from Ben Roethlisberger.

You’re not going to see many running backs in the NFL do this week-to-week, let alone rep-to-rep.

Harris ran all night long behind an offensive line that was really rough on Monday night, but there was never any question about Harris’s effort throughout the game.

That might not look like much, but that’s one heck of a rep from Harris, forcing veteran pass rusher Robert Quinn to miss right away, before then slipping under a tackle attempt from the powerful Akiem Hicks. Though the run went for a loss, that type of effort will endear Harris to his teammates and the fanbase for years to come.