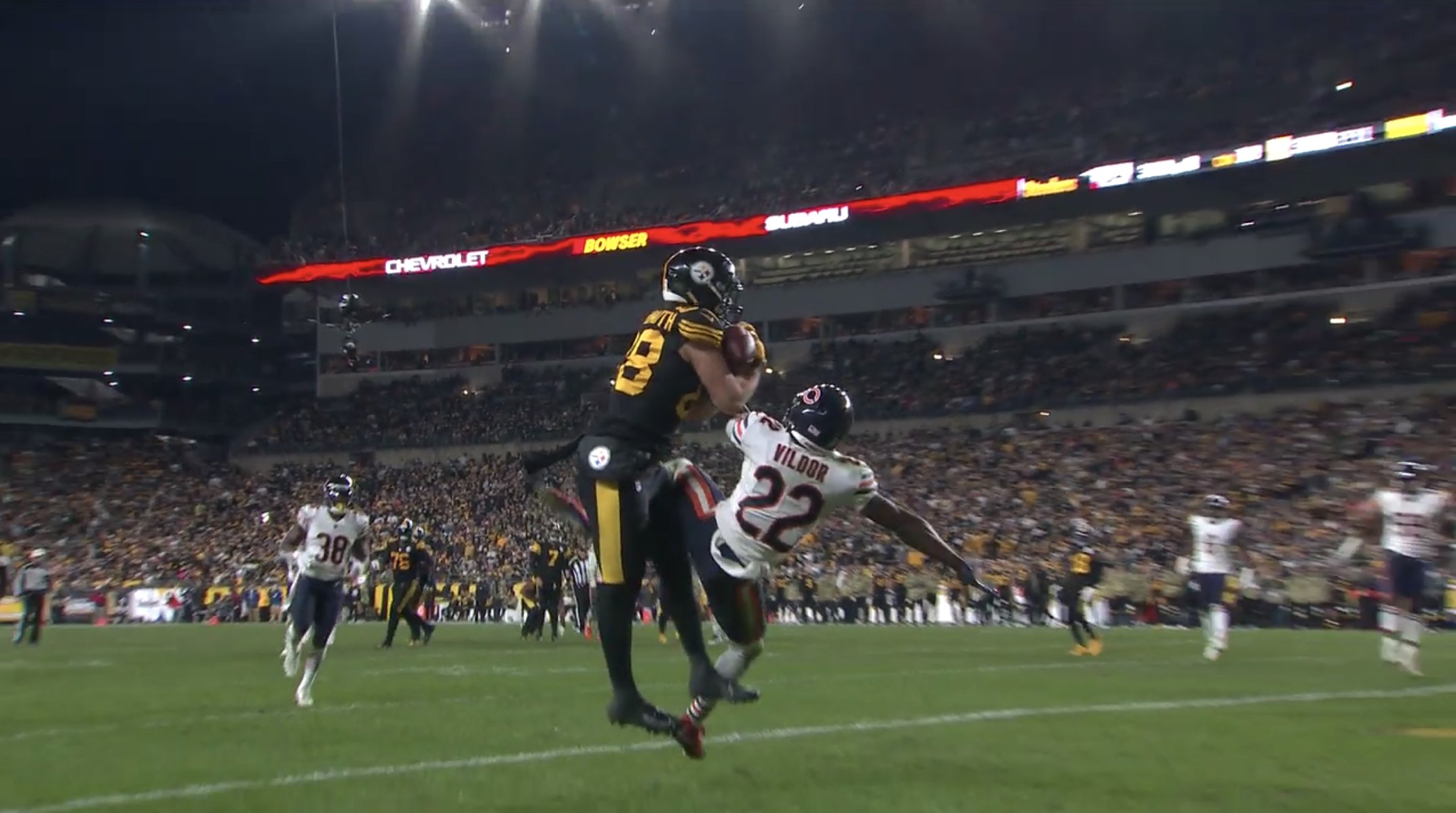 It’s becoming a familiar sight for the Pittsburgh Steelers and rookie tight end Pat Freiermuth. In big-time games, in key situations and especially in the redzone, Freiermuth — more often than not — is going to come through for the black and gold.

On Monday night at Heinz Field against the Chicago Bears in a wild back-and-forth game, Freiermuth again came up in clutch, hauling in a leaping catch over Bears’ cornerback Kindle Vildor along the right sideline in the end zone, and then made a sliding 13-yard fingertip catch off the turf to help set up Chris Boswell’s 40-yard, game-winning field goal.

For some, it can be perceived as a surprise to see a rookie tight end continue to come through in big moments for the Steelers, considering the usual learning curve tight ends face coming into the league. For Mike Tomlin and the Steelers though, what Freiermuth is doing is no surprise whatsoever.

“I don’t think that any of us are surprised by what he [Freiermuth] did tonight,” Tomlin said to reporters following the win over the Bears, according to video via the Steelers’ official YouTube page. “Those that are watching us day to day know he’s a good combat catch guy. He delivers in those moments and it’s just good to watch him develop and write his story in that way.”

Freiermuth did a great job working himself open near the front left pylon in the end zone on his first touchdown catch, and then absolutely bullied Vildor for his second touchdown, capping off the terrific night with the sliding catch on the final drive of the game, moving the chains and setting up Boswell’s eventual game-winner.

After the win, Steelers’ quarterback Ben Roethlisberger tried to keep the rookie tight end — who hauled in five passes for 43 yards and two touchdowns — humble and grounded, cracking a joke to the media about his emerging star at tight end when asked how confident he is throwing to the rookie when covered like he has in the last two weeks.

On the field following his impressive performance against the Bears, Freiermuth was interviewed by NFL Network’s Aditi Kinkhabwala. Asked if he was nervous at all in the big moments on Monday night, Freiermuth was quick to harken back to his college days at Penn State and how big games at the collegiate level prepared him for success in the NFL.

Right after this nutty #MNF finish, #Steelers rookie @pat_fry5 talks crazy endings, key plays and maybe being THE tight end this team has searched for since Heath Miller retired. pic.twitter.com/qUZQDOKyDl

“I’m truly not nervous,” Freiermuth said, according to the interview from NFL Network’s Total Access. “I’ve played in big games at Penn State, and all of the coaching staff here builds me up with confidence, and all the guys support me and stuff like that. It’s easy to play with guys that support you, and that’s what they do.”