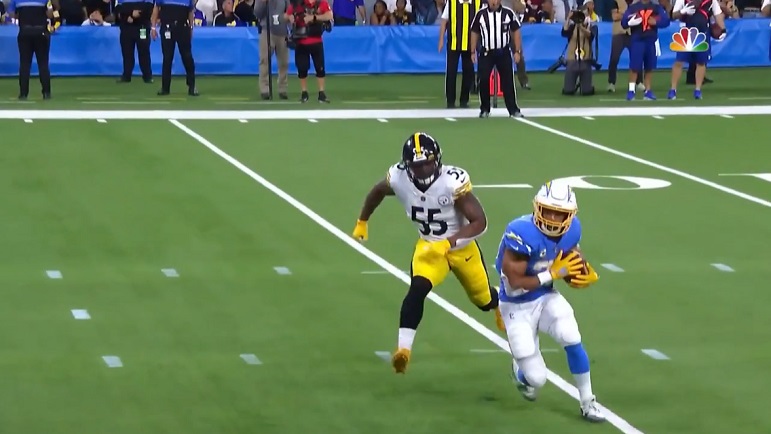 Despite now being a full year removed from the torn ACL that he suffered in Week 6 of the 2020 season, Pittsburgh Steelers inside linebacker Devin Bush isn’t playing very well at all through the first 10 games of the 2021 season. In fact, Bush’s play in the team’s Sunday night loss to the Los Angeles Chargers was graded by Pro Football Focus as being the worst of the young linebacker’s NFL career. With Bush seemingly struggling week in and week out this season, Steelers head coach Mike Tomlin was asked to characterize the play of Bush so far this season.

“His play has been spotty at times,” Tomlin said of Bush on Tuesday. “It hasn’t been at the level of consistency that we would like or that he would like. But he has had some challenges from a health standpoint and is working back from the injuries and things that he has. He was the Ed Block Courage Award winner for his ability to come back. You look at some of the injuries, similar injuries that are going on around the league, guys that are in similar circumstances, they’re participating much less. Unfortunately, I saw Bud Dupree, for instance, was placed on IR last week and Saquon Barkley and others. Zach Banner, on our team, is still working his way back. So, we want more from him. He wants more from himself. But we are appreciative that he’s put himself in position to be available and is playing as much as he is and is having the level of consistent availability and production that he is.”

Bush has straggled in several areas this season with his run defense really looking spotty. He is not playing downhill very aggressively and seems to struggle at getting off blocks more than ever. His play Sunday night was broken down by our very own Jonathan Heitritter on Tuesday morning, and you can decide for yourself what you think of the young linebacker’s performance in that contest.

Tomlin saying that Bush’s play so far this season has been “spotty at times” seems like a bit of an understatement on his part. Spotty and all, however, the Steelers are not showing any signs of potentially playing Bush less moving forward into the remainder of the regular season.

On Sunday, the Steelers will play the Cincinnati Bengals at Paul Brown Stadium. The Bengals offense seems to be clicking well right now, and that includes their running game, which is led by running back Joe Mixon. You can bet the Bengals offensive game plan on Sunday afternoon in Cincinnati will include several runs in the direction of Bush, so the former first-round draft pick out of Michigan better be prepared for that.

As we sit here in Week 12, it’s hard to imagine that Bush will have his fifth-year option picked up by the Steelers during the offseason. There are, however, still seven games yet to be played, so Bush has time to show that he more than deserves to have his fifth-year option picked up. If, however, his spotty play continues in the Steelers’ next two games, both of which are against AFC North teams, Tomlin might need to really consider benching the inside linebacker until the team thinks he has fully recovered from the knee injury he suffered in 2020.