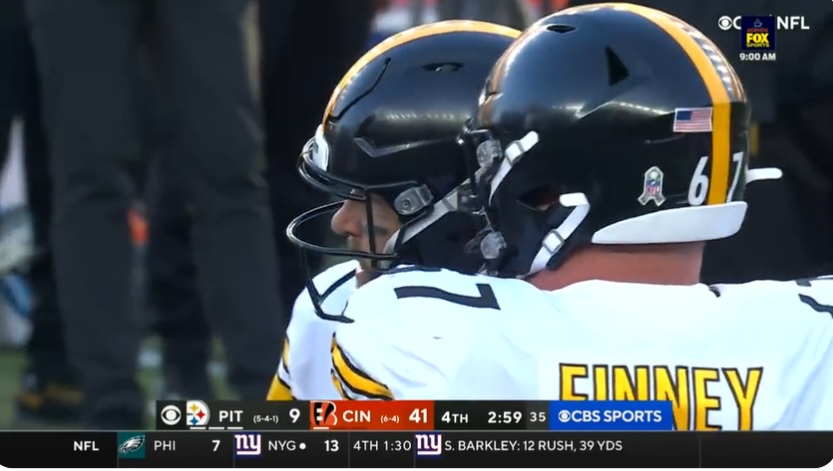 Despite one of the worst losses of the Mike Tomlin era, few Pittsburgh Steelers starters were removed from the game. Most notably, Ben Roethlisberger, who was not sat down in a game the Steelers had no chance of coming back and winning.

In his post-game press conference, a brief one, as you probably could’ve guessed, Tomlin explained why the starters played end-to-end.

“We need the work,” Tomlin told reporters after the game. “We weren’t playing well enough.”

An understatement, if there ever was one. Roethlisberger has rarely been pulled from games in his career, especially losses, a down-with-the-ship mentality. So it’s no surprise to see Tomlin keep Roethlisberger in until the bitter end, racking up garbage-time stats and the team’s only touchdown of the day, a great catch by Pat Freiermuth in double-coverage.

But with the game out of hand, Roethlisberger seeming to have hurt his arm/elbow in the game, and a physical contest against the Baltimore Ravens on tap next Sunday (not to mention a short week with a Thursday game after that) it’s fair to question if Tomlin’s decision was the right one.

Roethlisberger said he asked Tomlin if he wanted to take Najee Harris out of the game but told reporters he never asked Tomlin to be removed.

“Fight for each other,” Roethlisberger confirmed in his presser following the loss. “I didn’t ask Coach one time to come out. It’s the Steelers’ way. It’s fighting to the end. I thought guys for the most part we did that. Guys showed their character at the end of games…Pat takes a crazy hit to the head. People will say why? But it showed his heart and his character.”

Roethlisberger wasn’t the only starter who played nearly wire-to-wire. Najee Harris played into the fourth quarter though he was eventually pulled for Kalen Ballage and Anthony McFarland. It’s a little less clear what happened defensively. Minkah Fitzpatrick was subbed out for Tre Norwood while TJ Watt and Cam Heyward seemed to have their playing time reduced on the final possessions, though our charting will have to confirm that later in the week.

Heyward said he had no issue with the coaching staff playing its starters well into the 4th quarter.

Pittsburgh was accused of quitting in Week 3, though their starters played all the way through that one. Personnel-wise, the team played their guys even when the game was long decided. But ultimately, questions over whether or not the Steelers should’ve benched starters is moot. The disturbing trend is how often they’re finding themselves in that situation. The Steelers will have to fix their issues and fast against the Ravens a week from today. Or else the same post-game conversation will take place.