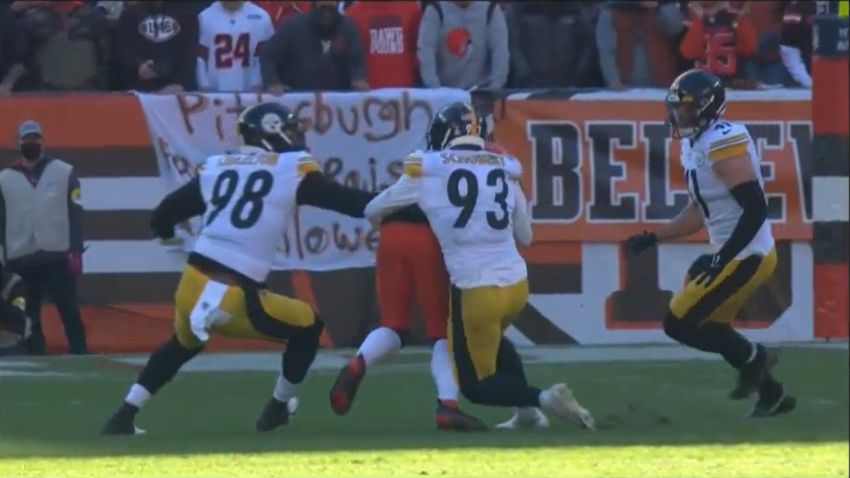 The Pittsburgh Steelers entered the regular season comfortable with the work that they had done to sure up the depth at the outside linebacker position after losing Bud Dupree and Ola Adeniyi from last season, replacing them with a seasoned veteran and former Pro Bowler in Melvin Ingram.

Unfortunately, their working relationship only lasted six games before ending unceremoniously with a deadline trade to the Kansas City Chiefs in exchange for just a conditional sixth-round pick. Head coach Mike Tomlin, however, doesn’t find himself uncomfortable with their other options behind T.J. Watt and Alex Highsmith.

“I’m really not”, he said on the Mike Tomlin Show on Saturday when asked if he had concerns about the depth there. “Due to unfortunate circumstances throughout team development, T.J. missed time contractually and so forth, Alex Highsmith missed some time with a soft tissue injury. That provided a platform for young players to get additional snaps and grow and develop”.

The only problem with that argument is that, while true, none of the players who were getting those reps are on the team any longer. Both of their current backup outside linebackers, Derrek Tuszka and Taco Charlton, were signed after training camp.

“Derrek has played a lot and had a lot of practice snaps”, Tomlin nevertheless said. “Taco as a practice squad player, who got elevated for the first time and contributed to our win in Cleveland, has gotten a similar opportunity”.

Tuszka was signed to the 53-man roster a couple of games into the season, replacing Jamir Jones, who is one of those players who got those reps he talked about. Jones ended up getting claimed off waivers. Charlton was on the practice squad until last week, but he played in last Sunday’s game as an elevation.

“We’re comfortable with those guys and the depth that we have at the position, and the snap exposure that they’ve been able to get in preparation because of the lack of availability of others has probably given us more of an indication of what they’re capable of than we would have gotten if guys hadn’t missed time”, Tomlin said.

Both Highsmith and Watt have dealt with groin injuries in-season that did cause them to miss time on the practice field. They also both missed one game, which happened to be the same game. Tuszka played in that one, but not Charlton. Still, ultimately, Tomlin finds himself looking forward to what comes next for the group rather than fearing it.

“We got some change and transition there, but not anything that’s alarming from our perspective”, he said. “Really it’s the exact opposite. We’re excited, particularly about seeing Taco, getting an opportunity to play more. He’s doing a nice job of assimilating into what we do here”.

Charlton only played 10 snaps in his Steeler debut, but he was around the ball twice during a sack and then a forced fumble, and may or may not have directly contributed to both, even if he got credit for neither.