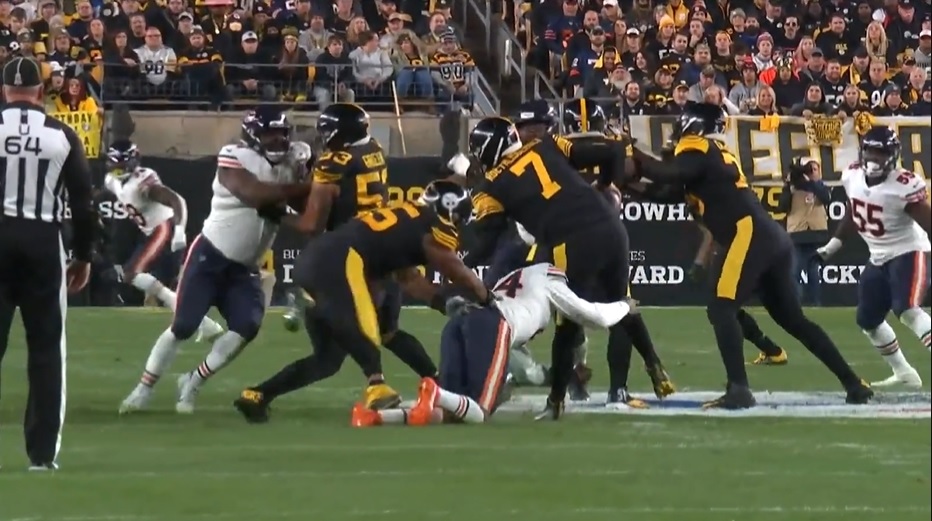 For all the talk about T.J. Watt and the sacks he’s put up five years into a future Hall of Fame career, there was one sack-related milestone that fell last night. Congratulations, Ben Roethlisberger. You’re the NFL’s most-sacked QB.

Taken down four times Monday night against the Chicago Bears, Roethlisberger has been dropped 534 times in his career. That makes him the most sacked quarterback ever, surpassing Tom Brady’s record of 533.

So who has taken down Roethlisberger the most? Here’s the top five, a cast of familiar names.

Most Sacks Of Ben Roethlisberger

No surprise to see Suggs top the list. Few quarterbacks and pass rushers have had a better rivalry than those two over the years. They’re followed up by a list of mostly ex-Bengals: Atkins, Johnson, and Geathers.

According to Pro Football Reference, a whopping 370 different players have at least a half-sack of Roethlisberger in his career. Everyone from Suggs to Willie McGinest (three times) to even Steelers’ one-time sack leader Jason Gildon, who dropped Roethlisberger in 2004 as a member of the Jacksonville Jaguars.

Roethlisberger’s sack story is a well-told one. Backyard Ben for roughly the first ten years of his career, running around and throwing players off him. Sometimes it led to an unbelievably positive play. And sometimes it caused him to take more hits than he otherwise would’ve. Live by the sword, die by the sword mentality. Roethlisberger had to change his game into his 30s as he became less mobile and his body began to break down. With coaching from the likes of Todd Haley, Roethlisberger became Pocket Ben with the league’s quickest release over the last several seasons, and taking significantly fewer hits.

Behind an almost new offensive line this season, Roethlisberger’s sack totals have risen, now dropped more in eight games this season than he was in 15 last season. And that’s put him ahead of Brady for the sack lead.

Of course, Roethlisberger and Brady could flip-flop the rest of the season. With the way things are going though, Roethlisberger is likely to finish the year #1 on the list. But assuming he retires after 2021, and Brady keeps playing for what feels like another five years, Roethlisberger probably won’t be in first place for too long.