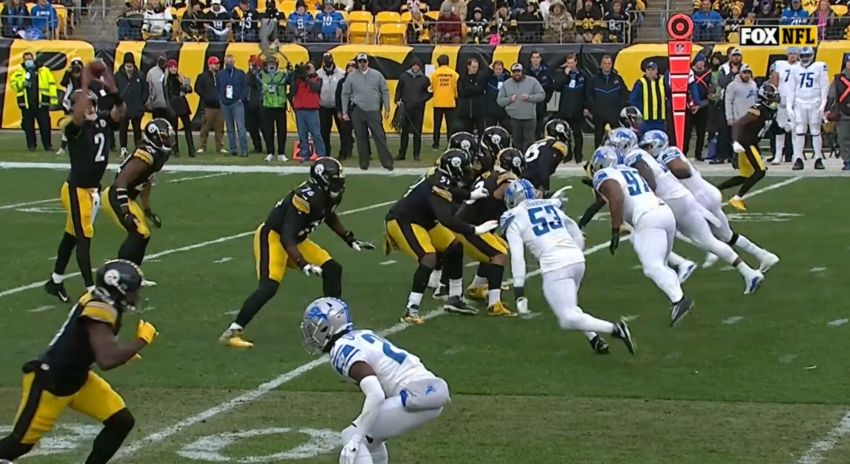 When you score 16 points and fail to beat a team with no wins midway through the season, it’s safe to say that you’re either a really bad team, or a lot of things just didn’t work out for you that day. For the Pittsburgh Steelers, the latter certainly happened, and that started the day before when starting quarterback Ben Roethlisberger was diagnosed with COVID-19.

That left Mason Rudolph to play his first snaps of the season, meaning there was a new quarterback-center exchange for rookie third-round pick Kendrick Green to contend with. It wasn’t the quarterback change that was the issue, however—it was his snaps.

Green had what felt like about half a dozen bad snaps during the game that forced Rudolph to stretch to field the ball. The worst offender, naturally, came at the worst time, snapping the ball over Rudolph’s head in overtime on 2nd and 6 from the 42 with 3:30 to play. That left them with 3rd and 23, which, shockingly, they didn’t convert.

“We got some [conversations] in between those series, and made sure he was honed in”, Rudolph said of Green after the game, about his high snaps. “It happens. He’s done a great job. That’s never been an issue with Kendrick, so I don’t expect that [to continue to be an issue]. He’s a young player, and obviously we’re all dealing with those weather conditions, and it affects different people differently, but like I said, I’ve got a lot of confidence in KG”.

Green’s predecessor, of course, was Maurkice Pouncey, a nine-time Pro Bowler and potentially a future Hall of Famer, but he left on a sour note. He snapped a ball over Roethlisberger’s head on the first play of the Steelers’ Wildcard loss last season, helping to open a 0-28 hole by the end of the first quarter.

Pouncey chose to retire this offseason after 11 years in the league, and they drafted Green to be his replacement. For the most part, the snaps have not been an issue this season, even though he primarily played guard in college, but there have still been concerns with his performance.

Pittsburgh’s offense features four rookie starters this year, almost all of whom struggled today. First-round running back Najee Harris was perhaps the only one to escape without a blemish. Second-round tight end Pat Freiermuth unfortunately fumbled with about 10 seconds to play, negating the opportunity to attempt a game-winning field goal. A hold by tackle Dan Moore Jr. negated a rushing touchdown by Harris.

But these guys are just a half of a season into their careers. Much has been placed on their shoulders. Some have risen above expectations. Others have not. All have displayed the characteristic inconsistency of young professionals in a new environment. They will all grow from the experiences of this season.