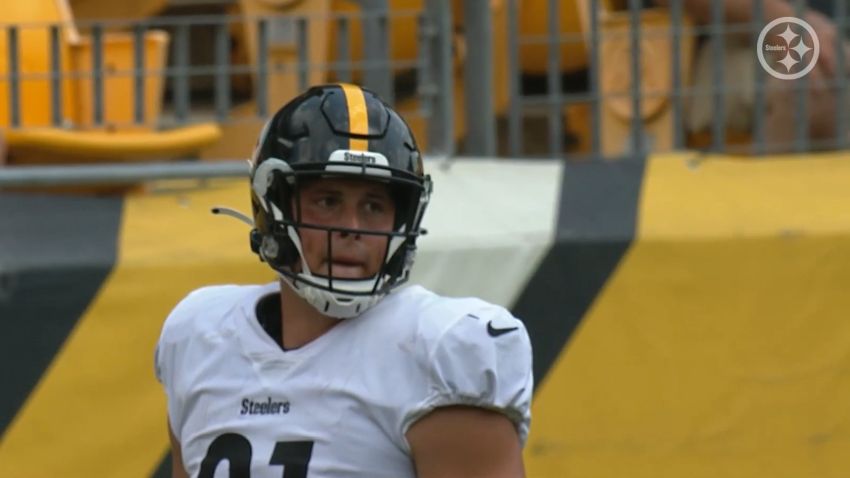 The first two years of Zach Gentry’s NFL career were an afterthought. 50 snaps his rookie season, a knee injury his sophomore year. Heading into Year 3, he was squarely on the roster bubble, his path to the roster made all the tougher by Pat Freiermuth’s selection. But Gentry figured things out this summer and not only did he make the team, he’s playing an important role in the Steelers’ offense.

Gentry played 45 snaps in yesterday’s win over Cleveland, 61% of the offense’s snaps. Granted, it came in a game without Eric Ebron, who was sitting out due to a hamstring injury, but Gentry’s snaps were well-deserved. And for him, the reward of an awfully long journey.

“It was a long road,” he said to reporters Monday in audio provided by the team. “And it was in college too. The first year I moved, I just was getting hit a lot and I was not on  the winning side of those.”

Gentry is new to playing in-line tight end. A quarterback in his home state of New Mexico, he was briefly moved to receiver and then to tight end at Michigan. He spent two primary years there, catching 32 passes as a senior, before getting drafted in the fifth round by Pittsburgh. Still, he was extremely raw, a big but straight-line player without much flexibility.

“Since I’ve gotten I’m up here at the next level, there was an even bigger learning curve. And so I think that I’ve adapted to it nicely and kind of taking the necessary steps week-in and week-out.”

Gentry made the most noticeable strides this summer and came on strong by preseason’s end, edging out Kevin Rader to be the No. 3 tight end. Gentry talked about the specific improvements he’s made in his career.

“Getting lower, firing up the ball faster, and better with my hand placement. It was something that was definitely very difficult but I think that I’m headed in the right direction.”

He and the Steelers’ run game are headed in the right direction. And that’s not a coincidence. Pittsburgh has some big people to run the ball effectively, as evident by their frequent use of 12 personnel against a tough Browns’ front. In past years, the Steelers used a sixth offensive lineman and tackle-eligibles in lieu of an extra tight end. That had its benefits but also its clear drawbacks, limiting the Steelers’ offense from a play action and pass-game standpoint. Gentry’s gotten involved in the pass game, including a 24-yard catch Sunday, while giving the team a competent blocker.

Seeing how well the run game has looked and how critical it is to the Steelers’ success, Gentry may have overtaken Eric Ebron as the No. 2 tight end. At the least, the two will be splitting snaps going forward.