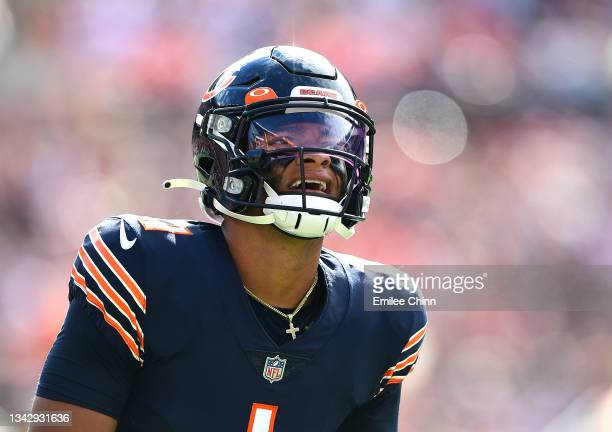 There could be some Ohio State on Ohio State crime happening Monday night when Cam Heyward and the Pittsburgh Steelers face off against Justin Fields and the Chicago Bears.

Heyward and Fields are both Buckeye alums and former first round picks. Whoever comes out on top in Week 9 could decide which team wins the game. Speaking with reporters Thursday, Heyward talked about what he’s expecting from Fields.

“I think he’s growing,” he said via Steelers.com. “Every week you see more and more that he’s getting more comfortable. Last week he was over a hundred yards rushing. He had that great scamper around the side. He never gives up on a play and we gotta make sure we play our best game.”

Beginning the year on the bench with head coach Matt Nagy adamant “Andy Dalton is our starter” Fields has been starting since Week 3. His NFL career has gotten off to a tough start, thrown into the fire behind a bad offensive line, not a lot of weapons, and a coaching staff that doesn’t seem to understand how to maximize his talent. In his first five starts, Fields completed under 58% of his passes with just two touchdowns, five interceptions, and a whopping 20 sacks.

But his play picked up in a close loss to San Francisco last week, completing a season-high 70.4% of his throws with one touchdown to one interception, though he was sacked four times. Fields’ biggest impact came with his legs, ten carries for 103 yards and a rushing score from 22 yards out, an artistic scramble into the end zone on 4th and 1.

Heyward knows the Steelers’ defense can’t allow Fields similar success this week, even if he has a soft spot for Buckeye players.

“I get more excited playing Ohio State quarterbacks. I’ve watched them enough during college football, get a chance to go up against them. Mobile quarterbacks, they stress the defense. He’s a young mobile quarterback that’s still growing that can beat you with his arm and his legs. So if we’re going to have our work cut out for us.”

Much of Fields’ running ability has been created by himself, not designed runs, which makes him even tougher to plan for.

“It was crazy, I think they only had two design runs for him. Then a lot of it was just scrambles and him going from the left of the defense to the right of the defense. He’s a great athlete.”

Quarterback containment will be key, and the Steelers’ gameplan will have to be aware of that fact when they devise their rushes and blitzes. That could mean fewer “two-way gos” for the pass rush, since losing contain can give the QB an escape lane (though there’s usually a rush plan to contain on the side of a two-way go).

It could also mean playing more zone coverage. Man coverage means the secondary has their back turned to the quarterback, making it hard to have vision on the QB if he begins to scramble. Pittsburgh’s defense is playing more zone this year than in seasons past, though so it may not alter their gameplan much.