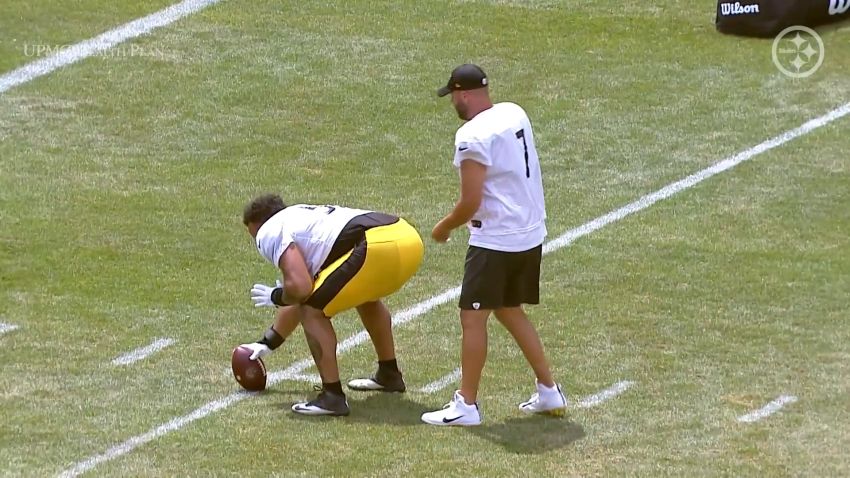 Ben Roethlisberger took over the starting quarterback duties for the Steelers back in 2005. That would put 22-year-old Kendrick Green at five years old at that time.

Green was entering kindergarten as Roethlisberger began taking snaps as an NFL starting quarterback. Now, Green snaps it to Roethlisberger as the team’s starting center. The rookie talked about just how surreal it still is.

“It’s still surreal. Playing Madden when I was in second grade and third grade, he was always the quarterback for the Steelers,” Green said Wednesday to media via the team site. “Now I’m snapping the ball to him. So that’s pretty dope.”

Green seems to be embracing the opportunity, as he’s stepped up for the Steelers in their three-game winning streak. Not to mention the fact that Green had big shoes to fill.

“I think he did have a little bit more speed to him back then, but you know, we still appreciate what he does.”

Rewind to Madden 06, when Green would’ve been in second grade, and Roethlisberger had a speed rating of 70. His overall rating sat at 88. In Madden 22’s most recent update, Roethlisberger sits at an unfriendly 72 overall. Meanwhile, his speed somehow has jumped to 71 since 2006.

Speed has obviously never been Roethlisberger’s strength. With that, I think we can all agree with Green that his speed has died down a bit over the last few years. His mobility around the pocket used to be a staple in his game.

“I wish I didn’t get that holding call on that play this weekend. He gave me a little bit of stuff for it.”

Green’s obviously referring to the two-point conversation that was called back for holding on Green. That was after Roethlisberger ran it in himself for what would’ve put the Steelers up 11-10.

As the team looks for their fourth straight win this weekend, their chemistry seems to grow with each passing week. The combination of youth and veteran leadership has been a good balance. While the young guys still remain star struck around guys like Roethlisberger, they’ve proved they belong on this stage.